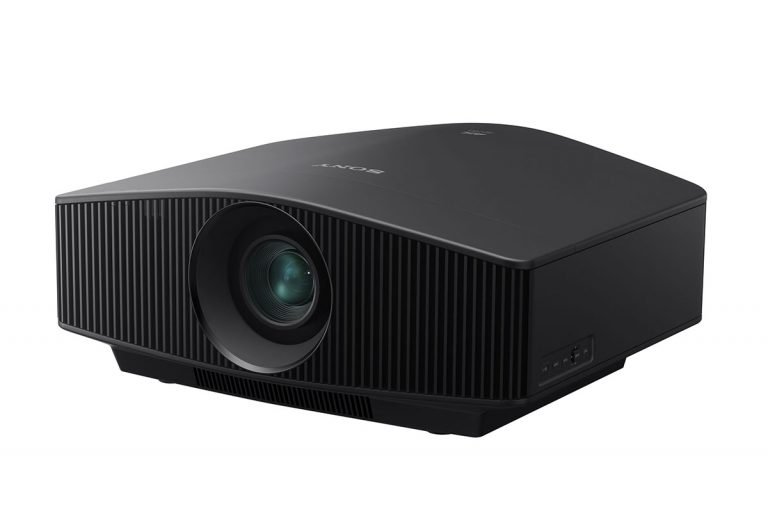 Yes, there are plenty of fine ultra high definition TVs on the market. I for one am particularly partial to OLED models with a screen of at least 65 inches. And Sony itself has recently joined in with LG and Panasonic in offering that technology. But let’s face it, one of the really big advantages of UltraHD is excellent picture sharpness and detail on really big screens.

For which you need a front projector.

All three Sony projectors use Sony’s SXRD (Silicon X-tal Reflective Display, Sony’s version of LCoS) panels. Three of them for the three colours, each with full 4K resolution. That is 4096 pixels by 2160 pixels. UltraHD is only 3840 pixels wide, but that’s not a problem. When displaying UHD, the extra pixels on each side are ignored.

The entry level model is the Sony VPL-VW260ES. That will be available in Australia this month for $7999. It can deliver up to 1500 lumens of brightness and supports High Dynamic Range and Hybrid Log Gamma formats for better handling of blacks. The lamp is rated at up to 6000 hours of life (in low output mode).

The lens controls – including the wide 2.06:1 zoom and the horizontal lens shift – are motor operated so they can be adjusted with the remote control. Unlike competing ultra high definition front projectors, these models will natively display 24 and 50 frames per second material rather than forcing it into a jerky 60fps compatibility mode. In addition, the projector has motion smoothing.

As far as I can work out, it’s identical to the VW260ES in most ways. What it adds are picture position memories – so the lens can be easily shifted between preset modes – an auto calibration feature and, most importantly, a dynamic iris.

The dynamic iris – Sony’s third generation of this technology – opens and closes to adjust the picture brightness according to picture demands. These can operate on a frame by frame basis in some implementations. This stretches the dynamic contrast ratio to an impressive 200,000:1. (The contrast ratio for the VW260ES isn’t stated, but in my experience SXRD projectors usually have a pretty good native contrast ratio.)

The biggie is the Sony VPL-VW760ES. Instead of the usual conventional ultra high power lamp, it uses Sony’s Z-Phosphor Laser lamp. As we’ve explained, this works by shining a laser at a rotating disk coated with phosphor to create the light.

This has the advantages of efficiency, reduced heat production, faster on and off, and long life. Expect a decade or more of very regular use before you even begin to approach the end of its life.

Sony says that this projector has an infinite dynamic contrast ratio and a brightness of up to 2000 lumens.

The VPL-VW760ES is available in black while the other two models come in both black and white.