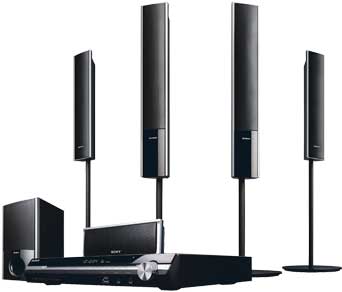 This system from Sony is a natural competitor to the Panasonic SC-HT65 except for two significant differences. The first is that it has a decent DVD player built in which, thanks to the HDMI output and 1080p upscaling, produces a very nice picture.

The second is that is has no HDMI inputs, nor does it have component video (nor any other) inputs. So the unit doesn’t support Blu-ray very well. You can still use Blu-ray, of course, but you will have to run a video cable (HDMI preferably) from the Blu-ray player directly to your display, and feed its audio to this unit with optical or coaxial digital audio.

As to sound, you get the same basic arrangement as the Panasonic. This relies entirely on full range 65mm drivers and a 165mm subwoofer. They look stylish and the ‘tower’ speakers come with stands for both the front pair and the surrounds. Still, they are limited. Sony doesn’t publish the sensitivity specification for these units, but they didn’t strike me as particularly loud, even with the 143 watts of digital amplifier provided for each of them.

Wireless is via an add-on system – the WAHT-SA1 – which is proprietary. Sony calls it it’s S-Air system, although it is still based on the 2.4GHz spectrum. This has a transmitter that plugs into the rear of the main unit (you have to unscrew a metal plate for this). The WAHT-SA1 supports all of Sony’s wireless systems, and it comes with a switch for surround or surround back operation, so you can use two sets of rear speakers if you have a 7.1 channel Sony system. This also provides 143 watts into the 3 ohms of the surround speakers (at 10% THD! Eeek!).

The important stuff was performed, and the communication system was effectively silent so that there was no spurious noise produced. There was plenty of range for my 6.5 metre long room, so don’t think anyone is going to have a problem here.

As with the Panasonic system, though, I suggest you consider the speakers of this system to be interim. Upgrade to a decent sub/sat system (you will need speaker-level inputs on the subwoofer) and you will get markedly better, and louder, sound while taking advantage of Sony’s fine electronics.