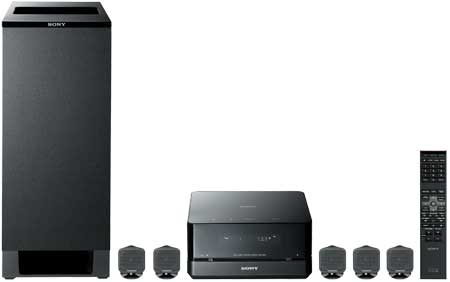 You’ve finally convinced your partner that the bedroom needs a 30 cm LCD TV for late night movie marathons. But bedroom TV still lacks the awesome surround sound you enjoy in the living room. Solution: the DAVIS10, which redefines ‘compact’ to create a system that fits literally anywhere. Not just your lounge room as a primary system, but also cramped dens to teen retreats, even the kitchen.

The key to the system’s versatility is the dimensions of the satellite speakers. About the size of a golf ball (albeit a square one) they put even Bose’s famous Lifestyle speakers to shame, at least in terms of dimensions.

What’s more, the DAVIS10’s control module is tiny too, similar to Apple’s Mac Mini, and the piano-black finish blends into almost any possible decor.

The sub is still pretty big, but since it’s a sub you can shove it under the bed, behind a couch, or even squeeze it up against a bookcase where it remains unobtrusive thanks to its slim form-factor and matte-black fascia.

This is a DVD/receiver system that caters for all the 5.1 DTS and Dolby surround staples and provides ample power for small-to-medium sized spaces: 5 x 50 watts to the satellites and a subwoofer claiming 200 watts power output. The slot-loading DVD bay allows Sony to pursue its minimalist styling, and the main unit only has two buttons: on/off and eject. The remaining controls are induction-based, like on the PlayStation 3. Brush your finger on the word ‘Function’ and the unit responds accordingly.

There are various different audio settings, including Sony’s Cinema EX system, and the unit outputs via HDMI, composite or component. You can also input via S/PDIF, optical or regular stereo RCA.

Finally, there’s a new input called the Data Port, a universal plug that accepts various different adaptors to allow you to control your digital devices via the unit. Adaptors are currently available for iPod and a Bluetooth receiver, though at $250 each you’ll have to really want iPod control.

Shove the sub somewhere out of the way, scatter the speakers in the familiar 5.1 pattern, plug the HDMI port from the main unit into your TV and setup is complete. It’s a very simple system in this regard.

Similarly, plug in your auxiliary devices and tap the Function command to select them.

A nifty feature is the various audio modes. Layout for 5.1 is obvious, but if you just want a stereo music player, you can arrange the five speakers in a row and the unit will mix the audio accordingly.

First, the surprise. With teeny tiny speakers it’s natural to expect flat, unengaging audio. But instead, the DAVIS10 performs as well as any 5.1 DVD/receiver system at this price point. ‘Golden eared’-types will immediately notice a pronounced lack of warmth to bass and mid-tones, but the tweeters keep the high stuff crisp.

Listeners who appreciate terms like ‘presence’ and ‘warmth’ may find this system a little clinical, but if your ambition goes not further than rattling the windows and still being able to understand even mumbled dialogue, the DAVIS10 won’t disappoint.

The DAVIS10 should only be your primary surround system if you live in a small- to mid-sized apartment or terrace. Yes, in one sense it’s surround for everybody regardless of geography, but on the other hand it really shines as a second surround system for your bedroom or study.

It looks good, the touch-controls on the unit are fun enough that you probably won’t even touch the full-featured remote for the first couple of weeks, and the quality of the audio is surprising from such diminutive speakers.