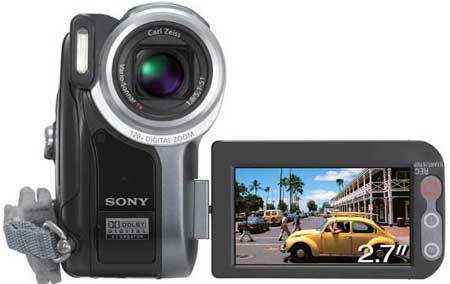 Sony, along with several other major players is continuing to push the direct-to-DVD camcorder as the best solution for home video makers. But are they providing solutions or just more problems? Denby Smith tests the top of the range Sony DCRDVD803 to find out.

The DCRDVD803 is tiny, based around the half size (8 cm) DVD it uses as its storage medium. DVDs are loaded from the right-hand side which is a bonus as you can still change discs while on the tripod. This may sound trivial, but traditionally, Sony camcorders are a bottom-loading beast which has caused many a prosumer to defer to another brand. The DCR is comfortable using DVD-R / DVD-RW and DVD+RW media by the way.

Behind an automatic lens cover that retracts when you power-up (which all camcorders should have and is being implemented thankfully by more and more manufacturers) is the Carl Zeiss Vario-Sonnar T-series lens. With a range of 42.8 – 495mm (in 16:9 widescreen mode) 45 – 450mm (in 4:3 mode) and 37 – 370mm (in still mode), it may not be as wide as you might like, but you can zoom in very close. The aperture ranges from a fast f 1.8 to 2.9 at full zoom.

You’ll definitely want to use a tripod for full telephoto shots – a drawback of these cameras is that they’re so small that hand shake is incredibly obvious. Most important for acquiring great images is the combination of lens and optics and this lens is coupled with a large (5.9 mm) CCD giving very good detail – in movie mode 2,048,000 effective pixels and in stills mode 3,048,000 pixels which is excellent.

The flip out LCD is great with a widescreen aspect ratio and a total of 123,200 pixels so images are clear. Access to the somewhat deep, though customizable menu is only available via the LCD – using touch screen technology you just press the items as they appear.

But herein lays the first problem…

If you want to manually focus, you need to go through two levels of menu then actually use the touchscreen to adjust. The touch screen is sensitive but you still need to apply enough pressure for your touch to register. This makes the camera wobble and even on a tripod, you can sense a little shake. Secondly – and it may seem a small point, but it’s enough to warrant mention – fingerprints! Fingerprints, fingerprints everywhere – all over what is essentially my viewfinder. Not good in my opinion.

The optical viewfinder is in the usual spot, however the size and position of the battery make it almost impossible to use with the battery hitting your cheekbone, preventing your eye from getting close enough to engage.

Function controls (on/off, mode and record) are located in the usual thumb position for your right hand. The Mode selector is now a sprung toggle, returning to centre position after switching with the currently selected mode indicated by one of three LEDs for Movie, Still or Playback. I found this system frustrating especially when you bump it while recording or trying to press the record button. The fact that each mode takes a second or so to initialize only makes matters worse.

A LANC jack input is built in on the right hand side. This is for an external controller that you would have to buy separately to provide remote control of zoom, focus and so on and would be a great add-on to such a small camera.

The DCRDVD803 has a stills flash built in beside the lens and below the lens is an infra-red panel which is used for the night shot feature which works surprisingly well. Obviously there is a very limited range but it’s a great effect. I took some shots of my friend’s radio controlled 4×4 carving up the gravel late one night and it came up brilliantly.

The only real problem I found with the optics was a harsh red vertical streak when directed at very bright light sources.

The Sony DVD803 comes supplied with a basic software package designed to help you pretty up your videos. Don’t expect too much – basic is the word, but it does have some cute features and it works well.

There’s a manual included that steps you through the process and which has clear diagrams to get you started. Basically you install the software, connect the camera to the mains power supply and connect a USB cable (supplied) to your computer.

This software allows you to complete a variety of tasks, including copying your stills and videos to your hard drive, sorting, copying and deleting files and ‘deleting unnecessary scenes from videos’. In other words it’s ‘cuts only’ editing and you can’t rearrange the order of shots or do much else. The software seems to simply cut out sections of the MPEG-2 video files – which you can choose in a simple ‘editor’ – and then it stitches the parts you want to keep back together, resulting in a shorter MPEG-2 file. The process happens quite fast and is reasonably accurate.

For simply cleaning up your home video, or for making slide shows with music (a small selection of music beds is included), Picture Package may well be good enough for many home video makers.

There are five pre-made styles for your videos: Sepia, Over-The-Top Music Video, Pro:Medium, Pro:Slow and Smoky. Choose the clips and/or stills you want to use, select the style and Picture Package builds your new video. You can save it to your hard drive for later re-use, or burn it direct to DVD.

The quality of the lens and sensor system in this camera is high enough to yield very crisp pictures on the 1st generation camera DVD. Movement artefacts were certainly present but not too severe and colour and detail were very well recorded.

To explore the editing possibilities further using a professional editing package (NLE), we decided to see how Sony Vegas 6+ DVD Architect handled a short video shot with this camera.

Using Sony Vegas to import from a DVD disk

With the camcorder switched to VCR Mode and plugged in to mains power, I connected it to the computer via USB2. It was immediately recognized, but I went instead into Vegas and selected File>Import>DVD Camcorder Disk. You navigate to the camcorder and import. Extremely simple.

The crunch came when I overlapped a couple of clips to form a simple transition and played them back. Now playback dropped to about 2 to 3 frames per second in preview mode and about 3 to 4 in draft mode. These rates are unacceptably low. When I?m working on the same computer with avi files, as opposed to MPEG-2 files, I can have six or more tracks of video, plus four or more audio tracks and they all play back at a full 25 fps in Preview or even Good mode.

So here is where using MPEG-2 files recorded direct-to-disk comes unstuck. If you want to do any serious editing using transitions, titles etc, the preview frame rate will be so low as to be unusable. Added to this is the question of how the edited video images will look when rendered a second time to MPEG-2 as part of the DVD building process.

The result? Not too good, actually, especially with any fast-moving vision.

MSP has had quite a long-standing reputation as an NLE that can handle MPEG-1 and MPEG-2 files very efficiently on the timeline. I tried importing the file that I?d captured from the Sony camera’s DVD but unfortunately it froze MSP completely ? something I can?t recall happening in Vegas.

I was able to import the file I’d re-rendered in Vegas ready for my DVD build and it did play smoothly in MSP. Possibly the freezing problem would be solved by using the latest version of MSP but it was disappointing not to be able to even get the original onto the timeline.

Overall this is a very neat little camera with some great features, including the lens, the CCD and the night shot. The design I think could have been a bit better thought out but it fits nicely in your hand.

POSTSCRIPT: Direct to DVD cameras in general – why do people buy them? David Smith comments.

An earlier review of Canon’s DC10 DVD Camcorder stated clearly that I was pretty unimpressed with anything other than unedited files played straight from the camera’s DVD. At the risk of sounding like a worn record I feel pretty much the same way after testing the Sony DVD803. It’s not quite as bad a problem as with the DC10, partly because of the Ziess lens and better LCDs in the Sony, but if you edit your work, even in a powerful NLE such as Vegas, you will have previewing problems because of low frame rates, especially when you add transitions and effects. Then, once you re-render to a 2nd generation MPEG-2 stream, even with a superb codec like the one from Main Concept, the picture is noticeably softer and movement artefacts are seriously distracting.

The only shots that recode reasonably well are static ones. This is where I am totally confused about where the manufacturers such as Sony and Canon are coming from with this format. The target market is surely home video makers who tend not to use tripods. But hand-held family movies shot on any of these cameras will have serious movement artefacts, especially once they’re edited. It seems such a waste of an otherwise great camera to put its output through the MPEG-2 wringer twice.

I can only conclude that some market research has shown that many people are happy NOT to edit their videos, but rather to just pop out the DVD and play it on their telly.

I would love to get feedback from a variety of consumers on this issue. For myself, there’s no issue at all. Once every camera comes with a Blue Ray disk or a sizable removable hard drive allowing recording of standard DV AVIs or high definition m2t streams, I may opt to make a switch. But for now I’m staying with those cute little $5 per hour marvels called mini-DV videotapes.