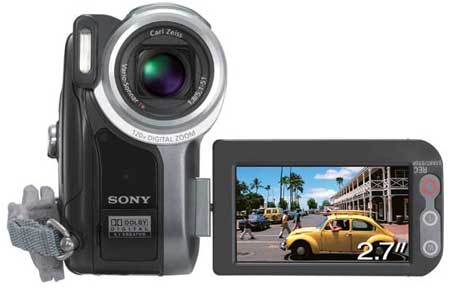 Sony’s DCRDVD803E is one of the better DVD-cams available, able to capture to a wider range of disc formats including DVD-R, DVD+RW and DVD-RW. It’s a well-featured camera combining a true 2.7-inch widescreen LCD to capture widescreen video but its key features are its large 0.33-inch CCD sensor and its quadraphonic Dolby Digital AC-3 surround-sound recording. Unfortunately, we think many of its features are let down by Sony’s software.

Although the camera appears as a drive under Windows, you need Sony’s driver and video editing software to grab the video despite it being captured in fairly generic MPEG2 format. While the CCD sensor has 2MP ready for capture, the camera can grab 3MP (2016×1512-pixels) stills with a little hardware interpolation. Despite all of this though, it still has a noticeable delay while the disc spins up. The DVD803E is loaded with features but DVD-cams have their inherent limitations.