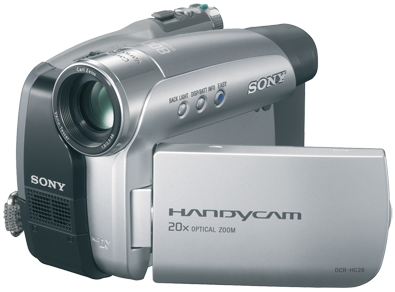 Mike Jones took a look at Sony’s new budget-priced MiniDV camcorder and liked what he saw.

The Sony DCRHC26 comes from a long line of camcorders and Sony has proven to be one of the few technology companies able to fully satisfy both ends of the spectrum; from the professional user at one extreme to the complete novice home user at the other. The DCRHC26 seems to be yet another highly targeted attempt by Sony to produce the definitive entry-level video camera, one that seeks to find that sweet-spot balance of functionality and ease of use.

In so doing, the question facing engineers looking to design products to a price for the novice market is not what to put into the camcorder, but what to leave out. Any camera like the HC26 represents a number of trade-offs and compromises, so has Sony made good trade-offs?

The Sony HC26 is a camcorder that, more than just about any camcorder Sony has made previously, is one that knows exactly what it is and who it’s for. What this means is that the features offered by HC26 have been very carefully selected; only those most useful to the beginner, or the user with no interest beyond ‘capturing the moment’, have been included and anything extraneous or unnecessary to that type of customer has been omitted. This direction is largely a positive one as the result is a camera that is functional, simple and inexpensive; arguably the three most important factors for many people and evidently concepts identified by Sony’s market research.

The definitive example of the thinking that has gone into the HC26 is shown in the ‘Easy’ mode. Pressing this button on the side of the camera marked with a blue dot makes video shooting about as easy as it’s possible to imagine (assuming you’ve already managed to find the ‘on’ switch). The Easy mode does a number of things that simplify, strip-back and automate virtually all aspects of the HC26.

While just about all current model camcorders for home users have a full-auto setting, Sony takes the idea one step further. Under Easy mode, not only are all elements such as exposure, white balance and focus taken care of, but the camera’s menu options are simplified to the most basic selections, information displayed on the LCD screen is paired back to just the timecode, and even the font size on the display is increased to make it absolutely clear to the user what’s going on with their shooting. A function like this, of itself, won’t make your video look any better, but it will make it easier to focus on core elements such as framing and keeping the camera steady.

What is good to see from Sony (and indeed any manufacturer) is that even though this camera resides at the very bottom of the Sony Handycam hierarchy – just $649 and one of the cheapest DV cameras on the market – the company hasn’t skimped on the lens, a Carl Ziess with a superbly respectable 20x optical zoom. Excited users, however, need to remember that keeping a camera of this tiny size steady at that zoom length without a tripod is near impossible.

With the sublime often comes the ridiculous and the inclusion of an 800x digital zoom on the HC26 is certainly that. I’ve said it before and I’ll say it again: digital zoom is little more than a marketing ploy to flash around large and impressive zoom numbers. As digital zoom simply enlarges pixels to make the image closer/larger, it destroys the quality of the image. At 800x the picture from the HC26E was absolutely unwatchable. In fact, much over 100x in anything less than the brightest sunlight was unusable. Digital zoom should be turned off the moment you buy the camera and never, ever turned on. Optical zoom is the only zoom that counts.

Sony’s standard Nightshot recording mode is one of the features that made the cut onto this budget camcorder and this feature’s ability to get fairly good images in very low light is quite remarkable. Alas, most inexperienced users tend to think Nightshot is about shooting in the dark, the results of which are invariably disappointing or, at best, make your images look like those from infrared night-vision goggles. The Nightshot function works best in very low light rather than total darkness and under these circumstances works well to boost what light is available and create firm contrast around subjects.

After many years of reviewing and using progressively smaller and smaller video cameras, moving ever closer to the James Bond ‘videocamera in a pen’, I should have long ago stopped being surprised upon opening a camera box to pull out a device smaller than my hand. Still, the compactness of consumer DV camera design continues to surprise me and the Sony HC26 is no exception. Literally not much larger than the palm of my hand, the HC26 is a clean, well-rounded unit with a very sparse array of well-placed buttons.

In keeping with the small and efficient design is the extremely lightweight construction of the HC26, coming in at about 400 grams with battery. Of course every design element on such a small and inexpensive camera inevitably comes with trade-offs. For the HC26, light weight is exchanged for durability. The thin plastic of the casing feels very brittle in the hands and this is certainly a camera that won’t take kindly to an abrupt knock or jolt.

The LCD screen is of prime importance to all functionality and features of the HC26, serving as touchscreen and primary camera control. It is wide, clearÂ  and sharp, and with a semi-reflective coating looks good even under fairly bright outdoor conditions. Sony continues to make touchscreen LCD controls universal across all its consumer level camcorders, doing away with almost all of the traditional buttons and dials.

Many users (particularly those who just want to point and shoot and thus have little to no use for functions other than the ‘On’ switch and ‘Rec’ button) will like the central location and well-designed menu system of the touchpanel. Others (and I count myself among them) detest touchscreen controls, decrying them as awkward, clumsy, fragile and resulting in a constant fingerprint smudging on your viewer. Touchscreen LCDs also demand physical traffic on what is already the most delicate part of the camera.

On the upside, the inclusion of both zoom controls and Rec as physical buttons on the side of the LCD panel is a very good decision, not just because of ergonomic accessibility but also because it’s the perfect place to hold onto the camera with a second hand for added stability. With this in mind surely it isn’t too much more for Sony to include manual focus control buttons here as well. Currently, manual focus is accessed from within the menu system on the touchscreen. Those who never use manual focus will never be bothered by this; those who do want to use manual focus will be irritated beyond belief.

This can’t be really said to be a criticism of the HC26, however. Sony knows who this camera is intended for and has designed it accordingly. Indeed, almost all of the elements the HC26 could be accused of failing in will never bother or concern the type of users who will find this camera attractive and useful.

Sound is always the most overlooked element on inexpensive DV cameras and to Sony’s credit the built-in stereo mic on the HC26E is about as good as it gets on a camcorder of this type. It is still susceptible to tape noise and handling cracks and pops, but the forward placement of the mic. away from conflicting buttons and hands is a good design on a camera supporting limited options.

And at last, at last, in an act of mercy that Sony has taken far too long in coming around to, the HC26 loads DV tapes from the top. Hallelujah! No more taking the camera off the tripod to put in a new tape. (If only Sony could get this right on some of their other more professional cameras, such as the A1P.)

Turn it on, pres Rec, point it in the right direction. Measuring the performance of the HC26 a relatively simple affair: it does exactly what it promises to do, and with a quite respectable lens up front and a superb zoom, there’s really not much more you can ask for in such an inexpensive and very compact camcorder.

The always telling low-light performance was rather poor on the HC26 but not any more so than other DV cameras in the same class, and the Nightshot mode, when used correctly and in suitable conditions goes a long way to rectifying some of these issues. The more the user knows about what?s required for a good shot (ie. more light) the better the performance that can be drawn from of the HC26.

The auto-focus mechanism worked extremely well as we’ve come to expect from Sony cameras, although lower-light levels, with resulting lower contrast, can lead to problems where the camera can’t tell what to focus on and will adjust back and forth until it finds something… anything. No camera can be user-proof and this is where, regardless of how simple the camera, user knowledge and experience makes the difference between a good shot and bad shot.

The standard battery for the HC26 is very small and, even though the camcorder itself is very small, it still draws roughly the same amount of power as any other camcorder, particularly since virtually everything on the HC26 has to be done through the LCD screen which is a substantial power sucker. The result is rather poor battery life. The Sony specifications say 110 minutes; I was unable to get past 80 and with use this will drop further.

Comparing cameras and drawing conclusions about their quality and effectiveness is a tricky balancing act of comparison between apples and pears and bananas. The overarching factor is to simply ask whether the camera delivers what it intends to the user group it is trying to service. The HC26 is a very inexpensive, very simple, entry-level camera for those who want to point and shoot and not think about anything else.

If you want a camcorder with some growing room to expand with your skills, one that will offer functionality and features as you become more confident and accomplished, then the HC26 is not the one for you. If you’re not technically inclined (or not inclined to want to be technically inclined), are completely disinterested in wrestling with the inner workings of depth-of-field, exposure and aperture, and want only to pointing the camera the right way and still get a pretty good picture, then the HC26 may be perfect.

This idea raises the question of format. Over the past year, camcorders that shoot directly to recordable DVD discs have become enormously popular and certainly Sony has been well and truly on this band wagon promoting the ease-of-use ‘shoot and watch’ immediacy of DVD camcorders. Indeed, a similar mindset and demographic on which the HC26 is focused. The catch however with DVD camcorders is that editing and post-production from this format is problematic. It’s here that the HC26 might fill a perfect niche for many home users – a simple cheap camera that is a snap to use but which doesn?t have the computer editing and format compression problems of DVD camcorders.