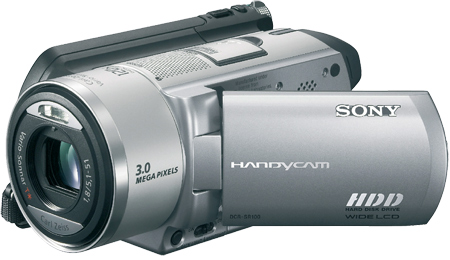 Sony has joined JVC in offering a camcorder with a built-in hard drive instead of tape or DVD media. Frank McLeod takes it out to play.

The Sony DCR-SR100E is a small brick-shaped camera, dominated by the rather large circular housing holding the optics and tiny flash. Behind this is an automatic leaf-type lens cover which protects the Carl Zeiss Vario-Sonnar T* (F=1.8-2.9) lens when not in use.

A single one-third inch CCD (5.9mm for the purists) uses 3,310,000 effective pixels to record video in the 4:3 mode and 2,050,000 when shooting in 16:9 aspect ratio. The fold-out 2.7 inch LCD monitor is in the 16:9 configuration, which means that when in 4:3 mode, the image is unfortunately quite small. Like a lot of Sony camcorders, the LCD monitor, with its touchscreen menu system, is a central feature. The menu icons are of good size, and scrolling through the various options is simple. At the left-hand edge of the LCD screen are additional separate controls for record/pause and zoom in and zoom out. The optical zoom is rated at 10x while the useless digital zoom claim of 120x is emblazoned on the camera body.

At the rear of the camcorder are the primary controls, with the power on/off switch protected by a secondary lock-off button. Once turned on, switching between video, still and playback modes is by repeatedly rocking the power switch, and a small nearby LED indicates the mode selected. Below the power switch is the Record/Pause button, and a tiny button next to this controls the (also tiny) flash. This contributes to the still photography capability of the SR100, with images up to 3 megapixel resolution. The disk access warning light is close by. The focusable viewfinder can be slid out about 15 mm, just clearing the standard battery and – surprise, surprise – it’s designed for use by right-eye dominant users. It does not tilt, which is becoming the norm rather than the exception these days sadly.

Hidden by the closed LCD are four buttons on the side of the camera. One switches from 16:9 to 4:3 mode, a second displays battery information on screen, a third allows the selection of the one touch DVD burn when connected to a PC and the last selects the ‘Easy’ mode which is sort of like a ‘Super Auto’ mode allowing the absolute minimal controls to operate the camcorder.

Below the LCD are the back light button and night shot on/off. These are just in front of a covered collection of ports – AV input, USB port and the AC adaptor socket. Another port, for an optional corded remote control is on the other side of the camera behind its own hatch.

A nice feature in the SR100 is the shock protection system called the ‘drop sensor’, activated by acceleration occurring during a fall. This aims to protect the hard disk drive from the effects of being dropped. I was tempted to test this, but then thought better of it. It is, after all, a fall back position for a (warning: clichÃ© coming!) worst-case scenario. This needs to be turned off when using the camera in bumpy situations to enable the camera to continue to function.

The SR100 has a 30GB non-removable hard disk which at its highest quality setting will allow 7 hours of recording. This would seem to be more than enough for the average family holiday or even a short OS trip without needing recourse to a computer, however, you would need to re-charge the supplied battery a number of times.

Video images are recorded in MPEG2, as mentioned, which, in HQ setting, was at an impressive 9,100 kbps variable bit rate, while its accompanying 5.1 sound was at 448 kbps. After DVD creation, while compatibility problems with some DVD players could occur with MPEG files with a combined bit rate of 9,500 kbps, this did not occur during testing.

The SR100 is a piece of cake to use, being very intuitive for obtaining basic video images. In either the Easy or Automatic mode, it really is point and shoot. After a delay for self-test, initial start-up is acceptably quick and as expected, start-up from standby is much quicker. The camera fully closes down after a selectable time has elapsed without user activity.

Access to manual adjustments – disabled in the Easy mode – is quite quick once you are used to the menu, the item order of which, in a nice touch, can be altered to suit the user’s personal preferences. All the common manual adjustments that might be needed are quickly accessible and all the options can be displayed in no more than four taps on the touchscreen. Focus, spot focus (where a particular part of the visible image can be selected as the auto-focus reference point), soft skin tone and program auto exposure with various presets for lighting and activity conditions all allow alterations while continuing to record. However, I could find no manual setting for white balance.

Personally, I found it awkward to power up the SR100 one-handed. The hand strap limits movement towards the rear and that is required to get at the power/mode switch. The zoom control is rather small but is rate variable depending on the amount of its movement. The viewfinder extends about 1.5 cm past the standard battery which rather limits its use in bright light and surprisingly, the eye cup tapers in, rather than the more usual flaring out and this certainly makes it more limiting in bright ambient light. The LCD screen was crisp and sharp and a delight to use.

The supplied battery should give over an hour and a half recoding from fully charged, but has to be charged on camera. It takes at least the same time to recharge, so an additional battery or two would be sensible.

After seeing the documentation that comes with the software, I suppose its shortcomings should not be surprising. The ‘manual’ is really an A5 pamphlet of 26 pages, one third of which is taken up with disclaimers, the index, installation instructions and a potted description of the software functions. In summary there are four – DVD creation with one touch straight from the camera, copying and viewing images on the computer and, finally, ‘editing’ and creating a DVD with ‘edited’ images.

I am sure there might be occasions that it would be handy to dump the contents of your videocamera directly to a DVD. However, given the limited on-camera editing (more or less simple date manipulation, file protection or deletion) the quality of what would be burned to disc would be variable at best. That concept reminds me of days of long ago and 8 mm film rolls straight from the developing lab.

When the ‘editing’ software, Image Mixer for HDD, is used, it simply allows straight cuts in the recorded clips to be made and then compiles them for burning to DVD. No titling, no filters, no audio editing and no transitions! It really doesn’t do much at all.

Of interest, there is no need to install any software to access the clips recorded on the SR100. Simply plug in the USB 2.0 cable and any Windows XP-based computer will recognise the camera as an additional hard drive. You can then simply browse to the appropriate spot and by double clicking play the selected file in Windows Media Player.

If this was my camera, I would be importing the clips into something like Womble MPEG Video DVD, Ulead Video Studio, Vegas Movie Studio or the like and do a far better job of tarting up my original footage.

Having taken a number of clips in a variety of situations, I used the One Touch DVD Burn menu option to make a DVD and then watched it on a standard 4:3 TV. Once read by the DVD player, all the clips were presented as chapters on a bland background and I could select any one and those following it would then play.

In good light, the SR100 performs quite satisfactorily for a single CCD camera. Colours were bright and there was little bleeding that I could see. The auto focus hunted a bit, but when that happened, I was fully zoomed in on a small grey kangaroo about 70 metres away, against a low contrast bush background, so I could not really hold that against the camera. When pausing a shot, there was a noticeable distortion of the image and I suspect I was too quick in moving the camera after pressing the pause button. In more subdued outside light, I thought the colours suffered in saturation and were just a touch muddy. In low light, however, it was much worse.

Maybe I expect too much, but with Nightshot selected, an inside shot at dusk of a brown boxer dog made him appear almost grey. I had to move the camera to make sure I was not somehow shooting in black and white. With Nightshot selected by the external switch, Super Nightshot can be turned on in the menu. At this stage, forget about taking any action shots. Breathing is about all this can cope with without serious movement artefact due to the low shutter speed. With both these options turned off, colour slow shot can be menu selected and while the colour picks up, movement again is an issue. The only type of subject I could think of where I might use this last setting would be to obtain images of a baby sleeping, or say, the birth of puppies or similar, where movement is not great but dim light is beneficial or necessary.

The on-camera surround microphone is very sensitive to hand movements while recording and there seems to be little in the way of motor hum. In the Setup menu, the main direction of the recorded sound can be indicated to better target that sound. The hot shoe socket is Sony-specific, a feature I never find attractive, as it excludes the purchase of more utilitarian external microphones, like the Rode VideoMic as an add-on. Becoming more common on newer model camcorders, strangely I think, is the ommision of a headphone socket.

One aspect that was rather impressive was the close-up ability of this camera. With no specific macro mode, I could bring the camera to within 2 cm and clearly focus on the subject. A shot of a wedding ring recorded to DVD using the One Touch DVD option almost filled our standard 4:3 TV screen. This camera would be great for close up of nature subjects and with a couple of spare batteries, a walk in the bush could provide a lot of great images. The extreme close-up ability of this camera lends itself well to videography of plants, flowers and insects.

The Sony DCR-SR100E is a small compact camcorder that takes pleasant pictures and is aimed fairly and squarely at the no-fuss videographer. The ability to record seven hours on its best setting makes it very convenient for travel, and the drop sensor HDD protection system adds some practical security to this idea. My betting is that ‘Mum, Dad and the Kids’ will buy this camera, with its limited software, and be very happy with it.

The addition of a more fully featured MPEG editing software package would take this camera to another level, but it remains a one-chip camera that records in MPEG and will remain limited by those characteristics.