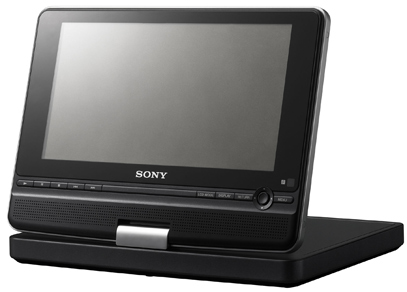 New 8 inch widescreen DVD player with six hour battery life is perfect for long plane trips, writes David Hague. But the screen could do with a rethink.

If there is anything guaranteed to bore me, it is a long plane flight – and by long I mean anything over one hour. Sure I have my Creative Zen music player, and my Ferrari laptop also travels everywhere with me, but at some point I have had enough of writing stories (I find playing games on a plane trip too difficult due to lack of elbow room) and actually want to relax.

I know I could watch a DVD on my laptop, but battery life is always an issue; even with a spare battery I get around three hours maximum, so it was with interest that I received a call from Sony asking if I would like a play with their new FX810 widescreen portable DVD player. With another an interstate trip imminent I jumped at the chance.

In my book, two major elements make for a top portable DVD player. The first and foremost is battery life and here the FX810 shines, with a lithium ion battery providing up to 6 hours of viewing. The battery is also very clever in that is it of a thin, flat style, the size of the main unit itself, and the FX810 sits on it. Astonishing is the fact the battery adds only around 200 grams to the overall weight of one kilo. A separate car (cigarette lighter) charger is also included.

Second in importance, and only a whisker behind, is screen clarity. Here, the screen on the FX810 is somewhat of an enigma. While the TFT LCD is a decent size at 8 inches (20 cm), and described by Sony as having aÃƒÆ’Ã¢â‚¬Å¡Ãƒâ€šÃ‚Â  “hard coating for durability”, I found its reflectivity to be more than annoying under fluorescent light. I wasn’t able to ascertain whether the hard coating caused this reflection, but it would appear so. If this is indeed the case, then durability is to be had at the expense of clarity.

‘Bright’ DVDs were passable, but watching a concert or a dimly lit movie was almost hard work as you had to squint through your own reflection. Similar units I have played with have a matte screen that didn’t exhibit this trait, and I am not sure why Sony chose this route with the FX810.

One the plus side, the LCD can be swivelled through a full 360 degrees, as well as folded back flat on itself, allowing viewing from almost any angle. Screen resolution is 480 x 220 pixels (compared to normal TV and DVD resolution of 768 x 576). The onboard circuitry, however, does a better-than-average job of scaling down from DVD resolution to give a sharp and clear picture – reflection besides.

Audio is available as either 48kHz with a frequency range of 20Hz to 20kHz or at 96kHz with a range of 20Hz to 44kHz. Sony does not quote actual performance figures in terms of speaker power (wattage), but suffice to say that because audio is delivered via two small inbuilt speakers (no Dolby 5.1 here), volume levels are not stellar. As such, headphones are really the way to go here and Sony has thoughtfully provided two headphone jacks (great for use by two ankle-biters in the back seat of the car). Listening to a range of audio from rock concerts to Star Wars, the sound quality to be had through these was much better than the internal speakers.

What would otherwise be a fine unit with a keen price of $499 is let down by a too-reflective screen. Hopefully, Sony will quick address this somewhat glaring – pardon the pun – fault.