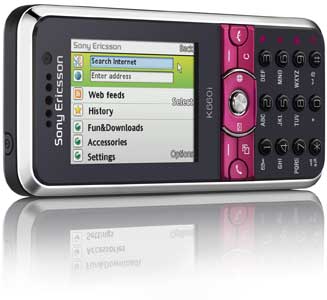 In an environment where every second mobile phone lately has seemed to be either a fashion phone with a big shiny brand name, or an attempt at the latest whiz-bang ‘mobile computer’, it’s refreshing to see a solid handset maker bringing out an inexpensive, funky new model. The latest design from popular mobile maker Sony Ericsson has not attempted to shock the market with spectacular processing power or any never-seen-before ideas, but this slick little handset still manages to keep a few tricks up its sleeve which let it stand out from the crowd.

Sony Ericsson has attempted to ramp up the credentials of the K660i as a web browsing device. With super-quick HSDPA download speeds, it’s a notch above many other 3G devices. Sony has been working on its mobile browser, and even includes a one-touch web access button that brings you straight to the home screen for Google searches, entering web addresses or checking RSS feeds. The web browser screen slips the device into landscape mode, and also switches four number pad keys into dedicate browser buttons.

The browser works well enough – but you’ll find yourself jumping back and forth from landscape mode to normal every time you need to enter text. The screen is very small for web browsing, even though it allows you to zoom in and out. Any Nokia or even Opera Mini users will be familiar with the K660i.

Another cool mobile-web feature is the in-built Google Maps application. For those who haven’t seen it, mobile Google Maps essentially gives you a GPS in your phone, without a GPS receiver. Maps are streamed using your data connection, allowing you to get directions and search nearby. Again, the small screen on the K660i doesn’t help, but the feature is a welcome addition.

Other features include Sony’s well-built media options, with an MP3 player, video etc (but you’ll have to use Sony’s headphone plug due to the lack of 3.5 mm jack), a 2MP camera (a bit below par currently), and some nifty entertainment features.

One frustrating aspect of the phone is the poor button layout. The number pad and navigation buttons are minute – even my nimble texting fingers struggled with the tiny keys (and while the phone allows for email, typing on these keys would be tiresome). A four-way navigation button is cramped up beside six other navigation keys and a central “OK” button – leaving little room for your fingertips to click around. Not suitable for the over-55’s consumers.

For an HSDPA phone, the price tag is very reasonable. $399 gets you your MP3 player with up to 4GB of Memory Stick storage, your GPS-like Google Maps, a decent internet browsing experience, and all the usual handy features like calendars and cameras and the like. For a couple hundred more you could get a slimmer, cooler Sony Ericsson – but for this device the price is right.

A sweet little all-rounder. All the features you’ve come to expect from the impressive Sony Ericsson brand, with a couple of additional extras you’ll find easy-to-use – and will find yourself using frequently. The K660i isn’t made to compete with the high-end power phones, but for the price tag, it’s a well-made device with good looks and a good feel.