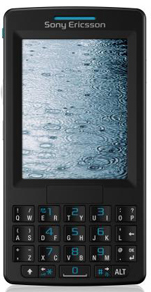 Sony Ericsson has worked hard to find its niche in the mobile phone market, but a string of stylish phones with solid features – among them the Walkman-series W800i and W810i, and the K800i camera phone – has helped set this double-barrel brand apart from the crowd.

The third member of this technology troika is the M600i. The ‘M’ stands for ‘mobile email’ (well, the first word at any rate) and it sees Sony Ericsson suiting up to woo business users who want a smart pocket-sized slab of productivity to keep them on top of the game while out on the road.

Available in black and white, with a stark block-like build that’s almost playful, the most immediately unique trait of the M600i is that – like the BlackBerry PearlÂ – letters are grouped in QWERTY fashion across the keyboard. However, each key on the M600i has a dual-rocker motion so that pressing it to the left selects one character while pitching to the right summons another. Shift and Alt keys are used to access capital letters, special characters and numbers.

The convex shape of the keys makes this easier than it sounds but so does a bit of patience and a lot of practice ? and you’ll need both.

A jog-dial on the phone’s left side is used for menu and interface navigation, with a stylus and touch-sensitive 6.6Â cm screen providing an additional means to tap your way through the phone’s functions. The pen can also used for tasks such as composing emails and editing Office documents, with a simple character-based handwriting recognition system (similar to that of a Palm or Pocket PC handheld) or a virtual keypad.

The M600i’s curious lack of a digital camera (when Sony Ericsson has some brilliant cellphone snappers at their disposal, such as the 3.2 megapixel K800i) is in response to corporate concerns over allowing camera-phones into secure areas. At least the M600i doesn’t forego a bit of downtime distraction by way of its media player, which supports the most common music (MP3 and AAC) and video (MPEG4) file formats, although video clips encoded with DiVX don’t pass muster. As a rule of thumb, the confusing number of ways to encode video makes a trial of playing clips on almost any smartphone device, so count on the M600i more as a way to pass the time listening to music than watching videos.

You’ll be able to cue a CD’s worth of MP3 tracks into the phone’s memory, and another onto the supplied 64MB Memory Stick Micro (M2) card, which slides into the phone through a slot on the side panel rather than being wedged inside under the battery.

For email, the M600i works with corporate ‘push’ email systems such as BlackBerry and Connect and Microsoft Exchange Active Sync, along with regular ISP-based email. The impressive Opera micro-browser can also be used to access Web-based mail, including Google’s mobile version of Gmail.

Sony Ericsson even throws in an RSS reader to keep you abreast of updates to your favourite Web sites, especially frequently-updated services such as news, sports and weather sites.

Naturally there’s a collection of business tools – calendar, address book, to-do list and quick notes – which are sufficient on their own and easily synchronised against Microsoft Outlook using the supplied PC Suite package and a USB cable. The M600i’s battery is recharged while the phone is connected to a computer’s USB port, and the phone can also be treated by Windows as a USB drive suitable for shunting files on or off the phone or memory card.

Sony Ericsson has packed so much into the M600i that just finding your way around the screen can be a bit overwhelming, and this isn’t helped by what appears to be an underpowered processor chugging away under the hood (although we were unable to find any information on what type of chip the M600i uses).

This is a shame, because Sony Ericsson phones have lately won many fans for their elegant interface and ease of use. At any rate, you’ll need to set aside a lot of time to have any hope of using the M600i to its fullest. On the upside, you’ll discover shortcuts like a list of the most recently-run programs and a home or ‘standby’ screen with icons for the contacts, calendar and messaging programs plus new emails, missed calls and an agenda view of your day.

After getting used to the M600i’s dual-action keyboard we found this was far preferable to using the stylus and touchscreen. In most cases it was both a faster and more accurate experience, especially for bashing out simple emails and SMS messages.

One of the immediate benefits of the M600i being a 3G phone rather than a GSM model (although it also has quad-band GSM compatibility for areas where there’s no 3G coverage, including some countries overseas) is its speed when you jump onto the Internet. The 3G networks average around 250Kbps, or five times the dawdling 50Kbps that you’d be stuck with on GSM. This isn’t crucial for email, but while we’re reticent to suggest surfing on almost any device smaller than a laptop, the M600i’s Opera browser is undeniably impressive in how well it renders Web pages.

With the M600i, Sony Ericsson delivers a stylish BlackBerry alternative with some extra features that score points for business use (such as the QuickOffice suite and RSS alerts) as well as an MP3 player for downtime. The key caveats are the lack of a camera and the sheer complexity of the device’s capabilities – it could prove to be too much for what you need.