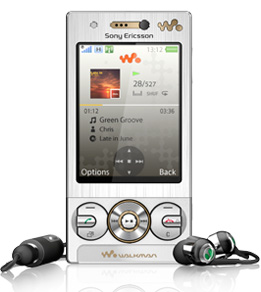 Sony Ericsson has been trying to get the Walkman brand up and running in its range of mobiles for a few years now, and the W705 marks its latest attempt at marrying the mobile and the MP3 player. With up to 8GB of memory stick capacity for your music, the W705 definitely has the Walkman element down, but theres more under the hood – a decent 3.2 megapixel camera, slim body and slick cut metal finish.

For a compact little mobile, the W705 looks like its squeezes a fair bit in – but is it enough to make it stand out from the crowd?

If you’re looking to buy the W705, the Walkman feature is probably top of the list of priorities. Sony Ericsson’s menu set up is easy enough to navigate – once you’re using the music player the central button acts as your play/stop/fast forward/rewind control, and you get to see your album art on screen.

But for a mobile which sells itself an a music player, it leaves a lot to be desired. First, and most irritating, there’s no 3.5 mm headphone jack, so it you want to bring you own earbuds you’ll have to plug them into Sony’s extension socket first – ugly and annoying.

There’s also a special Walkman button on top of the phone for quick access to your music, and holding to button and giving the phone a shake lets you skip tracks. Problem is, the button is tiny, making it a bother to use so you’ll probably just end up ignoring it.

The camera does the job – 3.2MP is hardly cutting-edge anymore so if you’re serious about taking photos with your mobile look at the LG Viewty or Renoir.

Apart from the camera and Walkman, features are pretty thin on the ground – it’s got a few games, calendar, email and IM (but of the most basic standard – it’ll never replace your BlackBerry) and the inclusion of Google Maps is handy and very impressive.

The W705 is a basic mobile. It has nothing to make it really stand out from the crowd, and if that’s just what you need – great! It makes calls and video calls, sends SMS and MMS, and has a simple web browser you might use if you’re bored waiting for the train.

Value wise, it’s a touch pricey for what you get – its price tag is creeping up into the territory of much more feature-packed Nokias or LGs, especially considering 3.2 megapixel camera phones with MP3 players have been around for years. It is easy on the eye so some night be attracted to the slick looks – but take care, the back cover is wafer-thin pastic and feels like it could snap at the hinges if you take it off regularly to change memory cards and such.

Sony Ericsson brought out the earlier W910 Walkman phone quite a while ago now and the W705 is almost a replica, save the better camera.

If you’re trying to avoid the fancy mobiles like the iPhone or Nokia N95, this one is a good pick. It’s most important feature is it’s a mobile, pure and simple, which throws in a music player and camera for good measure. The interface is simple to use and the keypad is responsive for easy texting and the occasional game.

Don’t need email, web, silly bells and whistles? Put the W705 on your shortlist – then check it against its peers in the same price range.