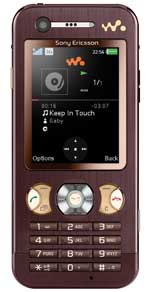 Phones don’t get much sexier than the W890i. An update to the already excellent W880i, the W890i is a 3G phone that looks fantastic, is sleek and portable, but boasts as many capabilities and the kind of battery life as many much chunkier phones.

It comes with in-ear canal-phones and PC software for ripping and uploading music to the phone.

When it comes to music, Sony Ericsson has consistently raised the bar with its Walkman series of phones. It continues to do so with the W890i. Not only does it produce excellent audio, it also boasts a suite of unique software tools for managing your music. For example, ‘SensMe’ automatically detects music style by analysing the tempo and mood of a track. You can then select the style of music you want and the W890i will only play back music in that style. We’re also quite fond of TrackID, which you can use when you’re listening to the radio. TrackID samples the music you’re listening to, uploads a slice of it to an online server, and responds with a likely guess as to the song’s name and artist. Of course you need Internet connectivity for this to work.

The headphones that come with the W890i deserve special mention. Unusually, they’re in-ear canalphones rather than the typical earbuds, and they come with several rubber casings for different shaped ears. The good thing about these headphones is that they produce very clear audio, absolutely none of which escapes to annoy the passengers near you on the train.

Neither they nor the W890i can conspire to produce the kind of volume that, say, an iPod could, however (which is probably a good thing for your prospects of being able to hear to old age). They also attach to the phone using a rather large plug that juts over a centimetre out of the side of the phone. It’s not pretty, and means the phone won’t slide so easily in to tight jeans pockets.

In addition to being a top-shelf music player, the Sony Ericsson is a more than decent phone. The audio quality is very good and it comes with a full array of messaging and Internet applications (including the ability to beam songs and photos to other phones via Bluetooth). It can even draw RSS news feeds and display them on the main page of the phone, giving you a kind of news ticker that saves you from opening the browser.

As with many small phones, however, pressing only one button at a time can be challenging. While the buttons have good texture and give, they’re very tightly packed together, though not so crammed as on the previous-generation W880i.

The phone’s 3.2 megapixel camera produces quality photos, though its lack of a flash means that you’ll need good lighting.

About the closest thing to an iPod and phone replacement we’ve seen, the W890 is light, portable and very capable. As a music player it has features and capabilities we’ve not seen in a phone – or even in dedicated MP3 players. It has a few limitations as a phone and as a camera, but nothing critical enough to dissuade us from heartily recommending the W890i.