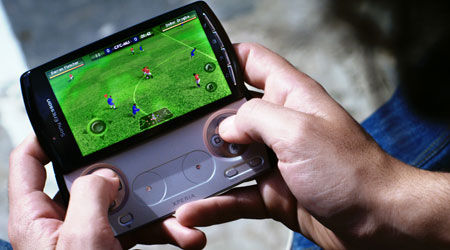 While most handset makers are busy producing iClones, Sony Ericsson is forging its own path with a phone that combines Android OS with Sony’s PlayStation Portable.

Looking at the Xperia Play, it appears that the PlayStation Portable has made weird gadget nookie with Sony’s Xperia X10 phone. Wrapped in a black and silver plastic casing with a glass top, it’s not an altogether unattractive phone, although it does have a fair amount of “chunk”.

Weighing a little under 200 grams, there’s a heft here that our pockets aren’t quite used to. Luckily, the designers have made this handset curvier than many other current models, so it rests in your hand quite comfortably.

The most unusual thing about the Play isn’t the pronounced curvature, however, but the PlayStation-inspired gamepad that’s revealed when you slide the screen up. Yup, whereas other smartphone sliders hide a QWERTY keypad, the Xperia Play conceals a controller very similar to a Sony game system.

A few changes have been made to accommodate the small size of the handset, however. The analog pads found on the console-based controllers have been replaced with two small optical trackpads, each located within a circle. These provide a more fine-tuned level of control, albeit one that gamers might not be used to.

There’s a directional pad on the left – as per the console controller layout – and action buttons on the right, as well as left and right bumpers on the back of the Xperia Play where your forefingers will rest. All up, the gamepad side of the Xperia Play has been designed well, fitting naturally in the hands and providing the best mobile game controls we’ve experienced.

The control pad isn’t your only method of interaction, though, with Sony’s 4-inch capacitive multi-touch display provided, now powered by a Bravia engine to aims to deliver similar colour vibrancy as found on Sony’s TVs.

As Sony’s first “PlayStation-certified” phone, the Xperia Play also provides something special beyond the gamepad controller: it will play games converted from the original PlayStation – a first for mobile gaming.

It will also play games designed for Android via the gamepad, with Sony making ready some of its classic titles – “Cool Boarders,” “Destruction Derby,” and “Syphon Filter” – for use on PlayStation-certified phones such as the Xperia Play via the Android MarketPlace.

Under the hood, Sony Ericsson has coupled a 1GHz CPU and small graphics processor to provide fast 3D graphics with what the company says is “minimal power consumption”. Almost everything else inside the Play is fairly standard fare for a mid- to high-end smartphone, including the 5 megapixel camera, Bluetooth 2.1 with A2DP, DLNA support, 3.5mm headphone jack, WiFi, GPS, the current release of Google’s Android OS (2.3) and an included 8GB microSD card.

Sony Ericsson is at pains to emphasise that the Play is still a phone, and as such, it does really shine. Voice calls were clear and loud through the phone’s excellent stereo speaker or Bluetooth connection, and while the touchscreen keyboard could be a little fussy – creating a little bit of havoc when typing or texting –overall the experience is a good one.

Sony’s customised Android 2.3 experience is one of the best we’ve seen yet, complete with its own dock, screen control, music player, menu system, and music identification application.

Gaming works by bringing in the “Xperia Play” software, a program that offers an easy way to find PlayStation-certified titles or games made specifically for Android. Sony’s converted PlayStation titles run quite well, although our review unit was preloaded with “Crash Bandicoot” only, a very old 3D platform title that has never been noteworthy

Other titles, such as EA’s soccer title “FIFA 10” and Gameloft’s high-speed racing game “Asphalt 6” run well with little graphical or speed complaints and excellent controls, thanks to the built-in gamepad.

Battery life tends to be where the Xperia Play chokes. Our usage scenarios saw us pulling it from charge at 8am, playing some games, making a phone call or two, texting, Tweeting, and listening to music over wired headphones. This is a typical day for us, and the battery conked out by 3pm. We tried improving this by turning off Bluetooth, but that gave only an hour more. When we enjoyed more gaming – around two hours – the battery died even earlier.

Of course, battery life will be less of an issue if you steer clear of any anything multimedia, web, or games based.

It’s a minor point, but one worth making – the power button. On a standard phone, positioning the power on/off button at the top right corner makes a lot of sense. But the moment you get into a game, you’ll find your hands holding the controller and pressing hard in this area, with the result being that we frequently put the phone into standby mid-game. Seriously, it happened a unfunny number of times during our review session.

Before the Xperia Play, only one company had tried a video game phone. Nokia’s N-Gage, however, was barely a good phone, let alone a phone with a good video game system.

Sony, however, has achieved excellent things with its first run at a PlayStation phone, and that’s a pleasant surprise. If you’re a fan of the Sony gaming catalogue, you’ll enjoy the convergence on offer here.

Overall
Features
Performance
Ease of Use
Design
Reader Rating0 Votes
It's a PlayStation phone!; One of the best stereo speakers on a mobile device; Runs the latest Google Android - 2.3 Gingerbread;
Multimedia play kills battery life ; Touchscreen can be fiddly; Placement of power button can interrupt gameplay
3.7