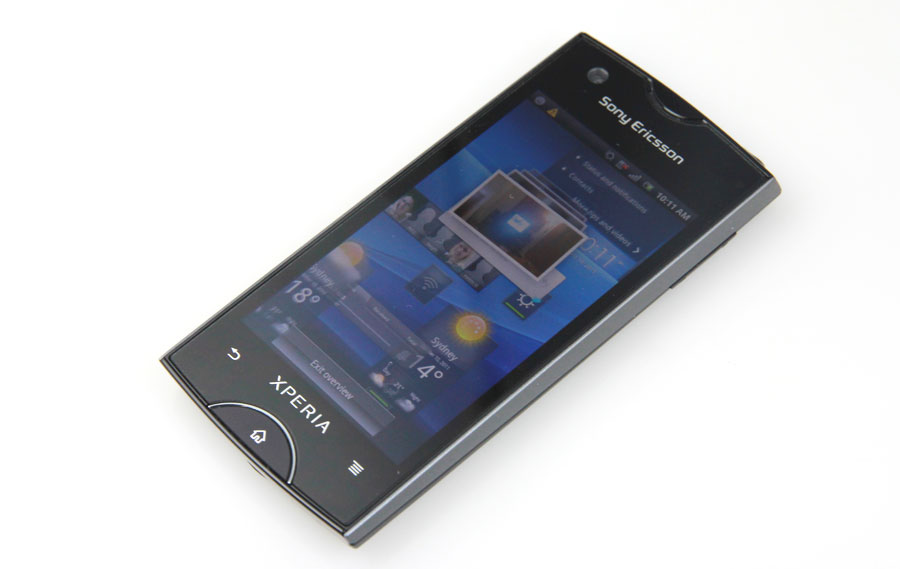 The fourth Sony Ericsson handset we’ve seen this year, the new Ray shares the “Xperia” moniker with all the company’s previous Android phones.

Like the models before it, you’ll find the company’s own brand of Google Android, and the latest version too – Gingerbread, 2.3. Under the hood, Sony Ericsson has packed in much of the same technology found in the Xperia Neo: a 1GHz processor, Adreno 205 graphics chip, and 512MB RAM.

Storage is similar, but there’s room for improvement, with 1GB built-in but only 300MB available to use. Sony Ericsson has thrown in a 4GB microSD, an acceptable amount for a midrange phone. You can, of course, purchase a larger microSD, with up to 32GB cards supported.

Sony Ericsson’s choice of screen makes the Ray unique, and the positively teeny 3.3 inch display even manages to support the same 450 x 854 resolution of other Xperia handsets. With no compromise in resolution, the image quality is superb and text is super-easy to read. It’s also covered by scratch-resistant mineral glass, similar to Corning’s Gorilla Glass used on other mobile phones.

It’s not just the screen size that’s small, as the unit is tiny, too. In comparison against all of the other phones we’ve been seeing lately, the 100g Xperia Ray is positively compact, feeling smaller than small handsets such as the Huawei X1, a $99 phone with an even smaller screen that’s much lower quality than the high-end one found on the Ray. Here, the display technology borrows from Sony’s Bravia TVs, with the Mobile Bravia Engine in use here designed to deal with video noise, contrast, and sharpening.

The high spec visuals continue with the camera, an 8.1 megapixel autofocus camera with LED flash. Video is also catered for, with 720p HD recording supported.

Regarding connectivity, you’ll find support for WiFi 802.11 b/g/n, DLNA, Bluetooth 2.1 with A2DP, and GPS. MicroUSB is also provided, and is your only real way of charging and moving data to and from the handset.

You’ll also find a 1500 mAh battery on the Ray, a similar capacity to what we normally see in smartphones with screens measuring 4 inches and above.

There are only two ports on the Ray, with a headphone sockets on the top-right edge and an exposed microUSB port on the left-side edge. Two soft buttons are located on the front – back and menu – with a physical home button on the front centre. A power button is positioned on the top, with volume buttons on the left side.

The design of the Ray is a little different to previous Sony Ericsson mobile phones. The more fashionable styling does away with the silver function buttons typically seen on the company’s Android phones and turns them into soft buttons that blend into the plastic face.

Only one physical button exists on the face of the phone – the home button – and it’s accompanied by an LED that changes colour according to what’s happening. Plug the Ray in to charge and – depending on battery level – you’ll find it switches to red, orange, or white as the handset recharges. The light will also flash when there are messages or other notifications, bringing back that old notification light and making it useful again.

In the hand, the combination of graspable plastic on the rear and mineral glass on the front makes the Ray very satisfying to hold.

We’ve talked about Sony Ericsson’s customisations of the Android OS before, and they’re still here in the Ray. The homescreens are all as customisable at the bigger handsets, supporting lots of widgets, folders, and shortcuts, and there’s still an easy left-to-right application menu system, similar to the menu screens seen on other popular smartphones.

One of our favourite features from the Neo is here too, allowing a pinch-to-zoom gesture to collect all of your widgets and then shake them onto your screen. A cute extension of this feature occurs when you shake the handset, prompting the tiny widgets to scatter and bounce around your screen.

There’s certainly a lot to like about the Xperia Ray – even the way the screen turns off is charming. Reminiscent of old CRT TVs, the screen folds itself in a thin white line that disappears when the phone has completely powered down.

Interestingly, the battery is better than many of the competing phones we review. The 1500 mAh works a treat, operating for well over a day throughout our usual test activities (calls, email, web surfing, social networking, browsing, taking photos).

Use your phone more sparingly than us, which wouldn’t be hard, and you can achieve over two days on one charge.

Much like the Sony Ericsson Xperia Neo before it, the 8.1 megapixel camera is excellent. While the image quality drops in low light, it’s useful to remember that this is a phone camera and not a true digital compact.

That said, the white balance is solid and the camera fast, generally grabbing focus in a second and firing. Face detection has been improved and the Ray’s camera can now pick up on three different levels of smiles.

As mentioned previously, the Ray is smaller than conventional smartphones, and we were surprised by home much we enjoyed it.

Its compactness, however, makes the keyboard a hit and miss affair. Turning it on for the first time, you’ll find a responsive touchscreen alphanumeric keypad, similar to what old phones had before QWERTY keyboards became de riguer.

You can switch this easily to an virtual onscreen QWERTY keyboard, but the keys are very small. In fact, users with anything but small or dainty fingers may struggle to get their messages across without mistakes. Despite this, the keyboard performance is very good, with the spell check system quick to offer word suggestions as you type.

Sony Ericsson has also done an excellent job with integrating social networking across its platform, but its email application leaves a lot to be desired. The smaller screen doesn’t afford much display area in either portrait or landscape mode, and there’s actually no way to search your inbox. We’re used to seeing a search button on Android phones, but the Ray not only lacks one, it also eschews a search button inside the mail app.

Video is a little lacking too, with only 720p HD recording on offer, instead of the 1080p Full HD we’ve come to expect in many mid-to-high end Android smartphones.

You also may experience a few speed slow downs from time to time. It wasn’t an every-time occurrence, but it would sometimes take more than a couple of finger presses to get the screen to respond.

The Ray’s tiny form factor really is a unique point of difference among a crowded smartphone market. Smaller and lighter than the competition – and nicely styled to boot – the Ray is better in the pocket and the purse, and that will appeal to many. What’s more, the miniaturist handset doesn’t sacrifice much in the way of function either.