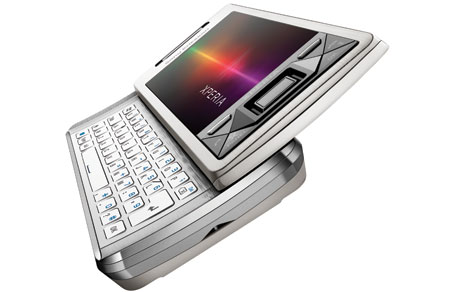 All has not been well for Sony Ericsson lately. They’ve made some great mid-range mobiles in the past, and they still do, but talk of Ericsson leaving the partnership then talk of them providing a “bailout” in the economic downturn is not good news. It’s become increasingly apparent in the past couple of years that the world has moved on from basic mobiles and the smartphone has really taken centre stage, and Sony Ericsson hasn’t kept up.

So here we have the XPERIA – but is it too little, too late from the once mighty mobile maker?

Reading the specs sheet makes the XPERIA look like a device that’s got it all. Full QWERTY keyboard, touchscreen, two internet browsers, camera, WiFi – the list goes on. All the things a smartphone should have, basically. But the biggest problem isn’t the features – it’s how hard they are to use.

Simply trying to use the XPERIA is nothing less than a nightmare. First of all there’s the touchscreen, then your typical navigation keypad, then a ‘mini-joystick’ in the middle of the keypad, then the QWERTY keyboard too.

Problem is, you’ll need to constantly jump between all input methods to effectively use the device. Sometimes you can tap the screen with a fingertip, other times you’ll need to use a stylus to tap the miniscule icons. Where the best smartphones aim for as few ‘clicks’ as possible to open apps, the XPERIA forces you to tap through menu after menu looking for what you want, and what each buttons does seems to change a lot.

The operating system is a mix of Windows Mobile and Sony Ericsson’s own ‘Panels’ interface, designed to give you easy access to your most commonly used applications. The Panels idea is good – you can even download new Panels (like CNN, Skype, or Facebook) just like an ‘app’ on other smartphones. But even the Panels screen is difficult to use, with touch-scrolling often resulting in you clicking on the wrong thing.

The web browsers (Opera Mobile and Internet Explorer) are workable, but again require finicky taps on both the keyboard and screen to effectively navigate. Light years behind fellow smartphones from Nokia, Samsung, LG, BlackBerry and the iPhone.

Users familiar with Windows Mobile will know what to expect – handy applications like Mobile Office (with Word, Excel etc), calendar, MSN messenger, Windows Media Player. All of which operate without too much difficulty, but they’re certainly showing their age when put up against other models on the market. Email and SMS should be easy with the full QWERTY keyboard. They are not. The keyboard is cramped, and even in landscape mode the screen appears small. Google Maps is always handy, especially with in-built A-GPS.

The XPERIA comes with an astronomical pricetag compared to its peers. Very few devices cost above $1,000, and in reality the best devices you can buy are actually below that figure. If you’re looking for the full QWERTY keyboard for email and easy messaging, look for the great value Samsung Blackjack, Nokia E71 or BlackBerry Bold. Want touchscreen with good business and personal apps? LG Viewty or Arena, or the Apple iPhone. All these phones will give you a better experience and cost less.

The most hard-to-use device on the market today. While it has a solid build and everything looks great on paper, it is slow, offers too many inputs, and behaves like a mobile from 2006, not 2009.

The XPERIA wins points for its keyboard, GPS and Mobile Office apps, but loses points for its awful interface and navigation. There are just way too many great smartphones out there to waste your time on the XPERIA.