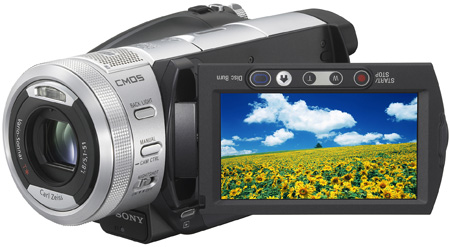 We seem to be swamped by exciting ways to view high definition television (HD), with LCD and plasma toughing it out. But, until now there’s not been a method to shoot full res consumer HD video.

Recently Sony and Panasonic developed a codec to compress HD video in the full 1920/1080i resolution, along with the capacity to capture 5.1 channel surround audio. Its name is AVCHD.

As the first model to employ this approach, Sony’s HDRSR1 camcorder is an amazing piece of technology that delivers the most enticing way to shoot 16:9 wide screen video to match top quality broadcast television.

Using a 30 GB hard drive to store the AVCHD video, it can hold, depending on record quality selected, anywhere from four to eleven hours of HD movie shooting; you can also shoot hours and hours of MPEG2 movies and write them to a Memory Stick. A cheaper companion model, the HDRUX1 uses 8 cm DVD discs to store 27-60 minutes of the same top quality HD video.

And stills: the SR1 will capture up to 2304×1728 pixel JPEGs and store them on the Memory Stick or direct to the hard drive itself.

The SR1’s lens is a 10×1 Carl Zeiss Vario-Sonnar T*. Viewing is via the familiar turret viewfinder or a huge, fold out 8.8 cm LCD screen. The camera is well-balanced in the hand and the big screen makes shooting and previewing easy chores.

Getting around the viewfinder menu system is a different approach and uses a series of icons, accessible via a touch screen interface. The result of this is the lack of external controls, which some may find a boon and others a benefit.

The fun really begins when you connect the camcorder to a high definition TV to replay your efforts. The camera offers outputs in HDMI or component for HD viewing; there is also an AV output for replay on a ‘bread and butter’ SD TV set.

Connection to a Windows PC is via USB 2.0 or FireWire. You can view the video on the computer with the bundled software and then burn DVDs.

Sadly, the news is not all bright and cheerful: at time of writing this review there were no software solutions to help with computer-based non linear editing. These fixes are promised from the major application makers such as Adobe, Apple, Canopus, Nero, Ulead and others.

The on-screen comparison of the SR1’s 16:9 picture and surround sound quality with that of top programming from your favourite channel is little short of breathtaking. For me, there was negligible difference between the lowest and highest quality possible with the AVCHD codec.

Be warned: after you’ve seen the quality the SR1 shoots you’ll fall for it, hook, line and sinker.