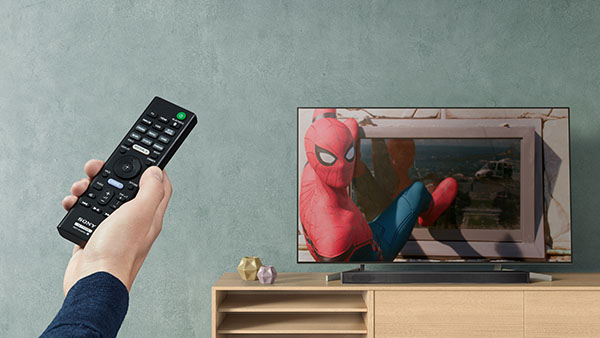 I’ve got to write this bit before I unbox the Sony HT-X9000F: a soundbar for less than $700, yet UltraHD video passthrough, and Dolby Atmos/DTS:X support? That’s what I’ve got to hear for myself.

Sony doesn’t say much about the tech inside the units. By dint of a torch and some careful peering through the fixed grills, I could determine that there are two oval speaker drivers inside the soundbar. Each is near one of its ends, and each measures around 75mm by 25mm.

The subwoofer uses a forwards-firing driver, around 130mm in diameter. The cabinet is bass reflex loaded, with the port also firing to the front.

The HDMI output works with the Audio Return Channel from most modern TVs. So, the HT-X9000F can easily reproduce the sound from TV programs (and streaming video, such as Netflix, showing on a smart TV).

The soundbar can be wall mounted or placed on the bench in front of the TV. It comes with an infrared remote control.

Switch them on again, and they’re right to go. At that point, I was almost shocked to see an on-screen menu from the soundbar appear on my TV. In my experience, that just doesn’t come at this – or even rather higher – price points. The menu conforms to Sony norms, with “Watch”, “Listen” and “Setup” master selections. You can use the setup to section to, for example, code in the distance between your seat and the soundbar, and then your seat and the subwoofer. That aligns the bass and treble in time. You can also set their levels.

Another setting allows you to have something called “DSEE” switched on. This is a processor which attempts to restore missing high frequencies. In general, I recommend against such things. It was switched on out of the box.

While Sony would obviously prefer you to use a Sony TV, I used the soundbar with my LG OLED TV.

Also important, do go and switch on the “IR-Repeater”. TVs are often low-set these days. That means the soundbar might block the little remote control sensor on the front of the TV. If you switch this function on, the soundbar will take the remote signal from your TV remote, and flash it out at the back to make sure the TV receives it.

Just one word of advice: it’s usually best to put the subwoofer in a corner if you can swing it. Unless you are highly expert at such matters, you’re unlikely to find a place in which it will provide smoother performance. Even if you are an expert, you won’t find a place where it can produce higher output levels.

The Bluetooth connection supports the AAC codec in addition to the standard SBC. That provides higher quality from most iOS devices. And, I’ve recently discovered, my Google Pixel 2 XL phone. As I’m writing this, I am playing the FLAC version of Hotel California, which is located on a NAS server in my office, on a DLNA music player on the Pixel 2 XL. The phone is connected to the Sony HT-X9000F soundbar by Bluetooth, so that’s where the music is playing.

The first thing to note about this is that the TV is showing track details provided by the soundbar. This screen also shows connection details, naming the device connected, the Bluetooth signal strength, the format and bitrate (AAC and 326kbps).

The second thing to note is that it sounds way better than a $700 soundbar ought to sound. I won’t pretend it challenges my $2,000+ stereo speakers, but still it was listenable. Those cymbals on the title track don’t have that lovely hovering quality they do with a good stereo speaker system, and sometimes the midrange sounded a little recessed, hiding the sung vocals just a touch. But still, it was impressive.

The tonal balance was good. Despite being slightly recessed, the vocals were clear. Their stereo image was surprisingly wide.

There are several pre-set listening modes which you can punch in from the remote control. Even though one was labelled “Music”, the “Standard” mode was by far the most accurate, the most like a higher quality stereo system. The “Vertical Surround” mode also worked. It was quite startling the way it turned a two-dimensional left-right stereo image into a wall of sound, with a clear sense of height. Indeed, this “wall” seemed to curve over at the top, somewhat towards the listening position.

Startling and interesting, but I still preferred “Standard”. One oddity made it harder to compare the modes. Most times when I selected a new mode, the soundbar would switch over immediately, but the subwoofer would drop out for a second or two before resuming in the new mode.

Movie sound worked just as well as stereo sound. There were limits to volume levels, which isn’t surprising since it is just two small oval speakers doing so much work. But with material like the DTS:X soundtrack on the UltraHD versions of the Harry Potter movies, the surround engagement was surprisingly effective. The system is certainly loud enough to fill a good-sized room with sound comfortably. Just don’t expect to be pummelled by it.

Effective surround does not necessarily equal accurate surround. I have some surround tracks which have single sounds going around the room. These mercilessly show any surround weaknesses. When they were supposed to be to the side of the room, or behind the listener, these sounds became an indistinct mush in terms of location. There are limits to what even the fanciest electronic processing can produce from two speakers.

If you want real surround, discrete speakers in the right positions are still the way to go. But they’ll use up a lot more space and cost you a lot more money.

I did experience one operational wrinkle. When I played some DVDs, the on-screen menu wouldn’t work. Normally when you change the sound mode or even adjust the volume control, something pops up on the TV screen indicating what’s happening. But not with DVDs.

But then I realised that I had my UltraHD Blu-ray player set to output the video at the native resolution of the source. So, the DVDs were coming out in standard definition. It turns out that the Sony HT-X9000F soundbar can only overlay that stuff on 1080p or UltraHD video, but not SD video.

I doubt this is an issue for most people. I suspect that I’m about the only person in Australia who has their player set up that way. But if you only have a DVD player, and it won’t upscale to full HD, you won’t get that useful on-screen menu.

The sound from the HT-X9000F subwoofer was generally tight and well controlled. It clearly didn’t extend deeply enough to produce ground-shaking dinosaur footsteps or explosions, but it did deliver the occasional satisfying thump during movies and produced most of the important bass in music.

Again, the surprise is what it delivers for the money. That was solid performance down to 41 Hertz. I measured the output up close to the main driver, and that produced good output from 51 hertz to 130 hertz. At the bass reflex port, the output was useful from 41 hertz, peaking in the 45 to 71 Hertz range.

Importantly, the subwoofer happily kept up with the soundbar, delivering the necessary volume levels without noticeable stress.

The output from the soundbar speakers starts to diminish below 200 hertz to be about 9dB down from its average at 150 Hertz. Since the subwoofer output falls off to be about 9dB down at 150 hertz, there’s probably a slight dip in output at that upper bass frequency. If anything, that probably clarifies the sound a little.

I was going to skim over the USB input that’s on the connection panel of the
HT-X9000F. Who cares about USB connections anymore? Then I noticed in the manual that it supported DSD files. That is Direct Stream Digital, the kind of digital sound encoding beloved of many audiophiles. It’s something that’s generally only playable on very expensive gear. So, I plugged in my test USB memory stick with its collection of formats and ran through them. Regular MP3 and AAC? Check. FLAC? Yes. High-resolution FLAC? Yes, for 88.2kHz, 96kHz and 192kHz. Apple Lossless? Yes, including high-resolution 96kHz. And Direct Stream Digital? Absolutely. Not just standard DSD but also double speed DSD, otherwise known as DSD128.

Not that the Sony HT-X9000F soundbar has quite the sonic chops to get the best out of these formats. But it was fascinating. Doesn’t Sony know that these kinds of capabilities are supposed to be disabled in budget gear, even if they happen to be built into the processing chips?

What can I say? If you have a limited budget and want surprisingly good movie and music performance, then the Sony HT-X9000F soundbar could very well be just the solution that you’re after.

Sony’s site for the HT-X9000F soundbar is here.