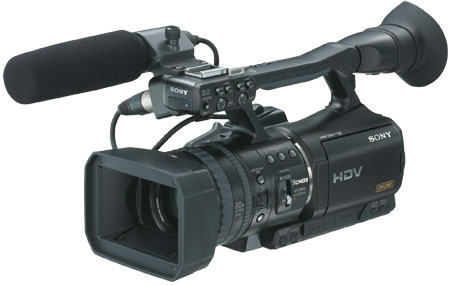 The medium-sized HDV market is about to become awash with fabulous new camcorders and Sony is quick off the block with the HVRV1. This is being touted as the replacement for Sony’s legendary PD-150, which was the workhorse for so many filmmakers.

The V1 is smaller than the Z1P and will not replace it. Having said that I’d wonder why you’d go for the Z1P once you’ve seen this camera. It sports three quarter-inch CMOS chips which are smaller than its rival’s one-third inch CCDs but, really, the fact that it’s 1080i (or 1080p) and three chips makes the comparison slightly irrelevant. According to online forums, head-to-head shoots against the Z1 show no difference in picture quality and the video I shot with it is really good.

This one is so new it came in a brown box and had no instructions. What self-respecting bloke needs them anyway – I am concerned at first look that you seem to need to have the battery on the camera to charge it. This would be a major design fault for serious users.

The Z1 has the nice leaf shutter to cover the lens and the V1 follows suit. Simple but a great feature.

Sony aims this model at both lovers of 1080i and those wanting progressive filming. They claim it has the best in-camera progressive ever and should blow away the opposition. In Sony’s sights are Canon with the XLH1 and Panasonic, which for several years has held the high ground in progressive ‘film look’ shooting.

My only criticism of Sony in respect to this camera is its love affair with menus. There’s too many to wade through to change settings that should be on an external switch (simple things like switching on colour bars). However, if you’re an existing Sony user then this won?t be an issue.

There’s no built-in mic, but so what? It has a very nice XLR mount on the top that covers most bases for mono shotgun or shotgun/radio combinations.

The top-mounted LCD of the V1 moves to the side where most LCDs live these days but the viewfinder switches off when you open the door. This is a pet dislike of mine. It’s better balanced than the Z1, so less backache there. Hand-held, it was easy to remain steady while zooming.

My most favoured change is the 20x zoom lens. The Z1’s 12x zoom was too short, but gone is the nice manual ring and, making a comeback is an infinitely rotating one that will annoy those used to the Z1.

It has swag of outputs (see the list) and the newest is HDMI, which is a nifty idea. It also records a smooth slow motion for six secconds by recording fast then playing back slow.

The CMOS chips use less power so longer life can be had from the battery. All in all this is a fine piece of kit and will carve a nice place in Sony’s line-up. Whether it achieves PD-150 fame remains to be seen.

Overall
Features
Value for money
Ease of Use
Reader Rating0 Votes
The iris ring on the lens. The settings store to memory stick. HDMI output. Smooth slow motion recording. The price.
It's a camera you hold in front of your face. Battery charged on camera. Would like a full iris ring on the lens.
4