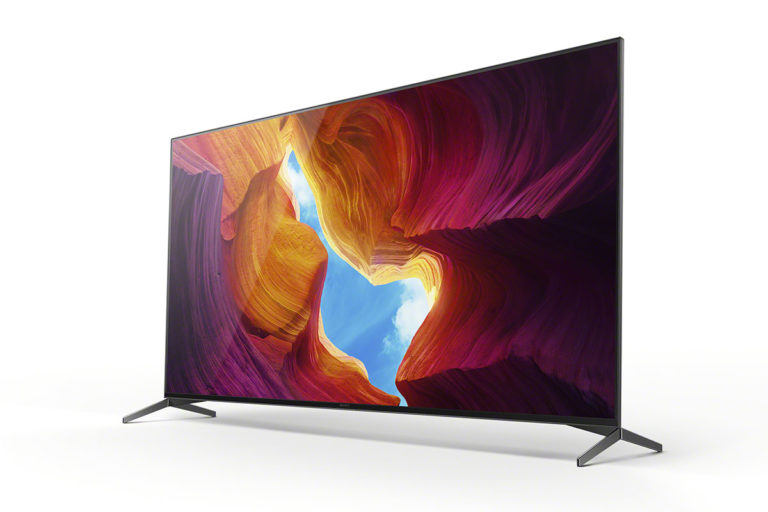 The Sony KD-55X9500H smart TV runs on Android, as is Sony’s wont. I’ll return to the smart stuff, but for now let’s consider the panel. This is LED-backlit. It uses the company’s Triluminos colour technology and employs the X1 Ultimate picture processor out of last year’s 8K model. I’m told that the Triluminos designation means the panel supports 10-bit video (and can thereby map more than a billion colours, and actually do something useful with HDR). The panel offers UltraHD resolution – 3,840 by 2,160 pixels.

The TV incorporates a host of technologies that I’m not going to list in full. Sony has a full feature list if you want to read more about them. The important ones are that there’s a Netflix Calibrated Mode which would be why the Sony KD-55X9500H is a TV “recommended by Netflix”.

The panel has a full array backlight. The number of individual zones aren’t specified. And to jump ahead briefly, I tried but could not actually come up with a reasonable estimate. Which is a good thing.

The TV’s aluminium bezel is thin and unobtrusive. The TV picture large floats in space against your back wall. The stand is a set of two straight legs that can be installed either at the extreme edge of the TV, or turn around so that they’re about 25% of the way in from each edge. In the wide-apart configuration, a Sonos Arc soundbar fitted nicely between them. Any soundbar up to 122cm should.

The usual range of inputs are on the left-hand side. The remote control looks conventional but actually operates via Bluetooth, so it doesn’t need line-of-sight.

The Sony KD-55X9500H TV is well equipped in the smarts department. Being Android, there are a wealth of apps. But there’s more to it than that. Take Apple AirPlay, for example. A bunch of Android TVs support Apple AirPlay, sometimes even Apple AirPlay 2. But usually this is by means of some kind of app running in Android, and I’ve generally found the results somewhat hit or miss. Too often, miss. Rarely hit.

But the Sony X9500H performed as though Apple itself had built AirPlay 2 into it the TV. I quizzed Sony about this, and it says that this is an actual hardware implementation. Which would explain why it worked so well, so seamlessly.

The TV also supports Chromecast but not Miracast. These days you can mirror via Chromecast all modern Android phones using the Google Home app, and Windows computer screens via the Chrome browser.

I have one problem with Chromecast. It doesn’t fully support 4K video. This TV conformed to that disappointing Chromecast norm. It downsampled all content down to 1080p or less. Specifically, it ran photos through a 1080p bottleneck, and with videos it seemed to be something of even lower resolution. I can tell because I use a test pattern someone out there on the Internet created. The pattern – it’s available both as a still image and video – consists of lines which are spaced just one UHD line pixel from each other. These were mushed together for the image version, and mushed together even more for the video version.

uPnP to the rescue!

Fortunately, the TV also supports uPnP network video. And this passes through both photos and video at full UltraHD resolution. The photos on this page show a closeup of the pattern, from video and photo, via Chromecast and uPnP, demonstrating the difference. Look, I like Chromecast in general. But just don’t expect top-notch video quality from it.

There are stacks of apps on the TV, including all the useful streaming services. The remote control has special Netflix and Google Play buttons, but things like Amazon Prime, ABC iView, Seven+ and so on are readily available from the home screen. Remember, even though there’s Android running in there, the thing is skinned with a fine TV-appropriate interface.

I must pay special attention to one very useful button on the remote that is too rarely implemented. It’s the “TV” button. If you’re watching a HDMI input or some network source, with most TVs you have to hit the input button and then go up and down the list to find “TV”, just to get back to watching free to air stuff. The Sony KD-55X9500H TV privileges that traditional function with that special button. No matter where you are.

The remote control generally worked very smoothly an effectively, but some of the menus had a kind of animation on certain entries. When those items were selected, there would be a brief pause as the item opened up and for that moment the arrows for keying through the menu would cease working. It slowed menu navigation.

That aside, everything that the TV was supposed to do it did, often with style. Sony’s TV platform is very well developed.

Well, 55 inches is a little smaller than I’m used to these days, but despite that the viewing experience proved to be very satisfying. Colours were strong and accurate. Upscaling of SD to the full screen was nicely done, with a surprisingly sharp and clean result.

I tend to do most of my reviewing with the default TV settings, except where something obvious presents itself as being wrong. That’s typically things like the “sharpness” control being up too high, or likewise for the motion smoothing. I really didn’t need to change many of the defaults in this TV.

Black levels weren’t quite as deep as they are with my regular OLED, but for 99 percent of the time, I did not notice.

With my test patterns – displayed in “Photo mode” since I was streaming them from my network server – the TV performed quite well. With a full black screen, it was quite dark, but there was still a subtle glow of the backlight breaking through the LED, just a trifle unevenly. The default settings had local dimming on “Low”. Turning it up to “High” darkened the whole screen a little.

With several other test patterns I attempted to discern the resolution of the full array backlighting. My patterns consisted of white dots of various sizes on black backgrounds and in most cases I can see where the oversized glows are and estimate the proportions of the screen dimensions they consume and, thus, determine their density. I failed with this TV. There were no countable breakthroughs of light.

Just as importantly, the backlights showed all the finest detail. Even if there were single white pixels in a full screen of black, they were properly displayed.

Smoothing things out with the Sony KD-55X9500H TV

Sony motion smoothing has been above par for many years, and the X9500HK series of TVs does not depart from that. The default setting seems to interpolate just one frame between the incoming frames, so it can leave a little visible judder in particularly judder-prone scenes. Fortunately, there aren’t too many of them. For the most part, the processing made the image silky smooth. And unlike most frame interpolation systems, there was absolutely no processing artefacts on this setting. (If you push it to the highest level of smoothing, some do appear.)

The Sony X-9500H TV performed in a mixed way on interlaced 50-hertz content. That’s the kind of content that you will receive from Australian free-to-air TV broadcasts and many Australian DVDs. It actually performed better on 1080i50 material, correctly identifying the film-source nature of the material despite ambiguous picture content. With 576i50 signals it was more likely to accidentally slip into video-appropriate deinterlacing, leaving irritating on-screen distortion. Look, chances are that your disc spinner already deinterlaces and scales for you, in which case you’ll never notice. The scaling itself was first class, making SD look sharper and cleaner than it actually is.

You can’t go wrong with the Sony KD-55X9500H TV. The brand is great, the smarts solid and the picture quality is very good. Go check it out.