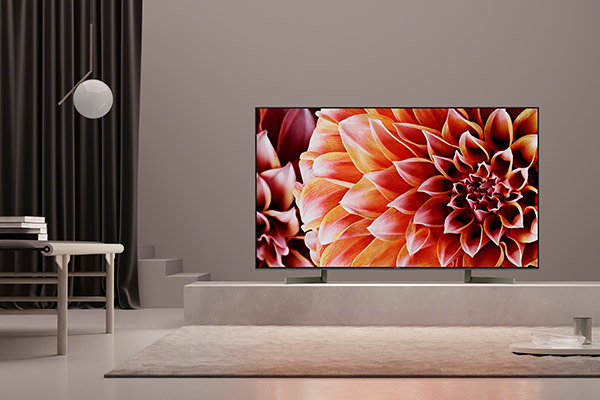 We totally loved the Sony A8F OLED TV. But not everyone can afford the premium pricing of OLED. So now we’re looking at Sony’s top of the line non-OLED 65-incher: the Sony KD-65X9000F Smart TV.

The panel is UltraHD in resolution and uses LED backlights. The TV enhances blacks with something called “X-tended Dynamic Range PRO”, which Sony says delivers “up to six times the contrast of conventional LED TVs”. Sony has not gone for a super skinny panel. It’s 69mm thick for most of its area. Sony calls the backlight “Direct LED”. I’m hoping that this is Sony-speak for some kind of array of LED backlights.

The Sony KD-65X9000F TV, of course, supports HDR10 (ten-bit high dynamic range) and HLG (hybrid log gamma). There’s no mention of HDR+, so I figure it does not handle them. (Content encoded with these will typically be delivered instead as standard HDR.) It does not support 3D. UPDATE: I don’t know how I missed it before, but there’s a clear “Dolby Vision” logo flashed up when you play Dolby Vision content. Googling around, I see that a recent firmware update added that functionality.)

On the audio side, there are twenty watts of total power for the built-in speakers. Apparently, they use some form of bass reflex enclosure. There are indeed two holes on the bottom. When I had the TV upside down for attaching its legs, I assumed that these were just another mounting option. But, no, bass reflex ports. The speakers fire downwards.

Sony lists a bunch of special image processing functions with very exciting sounding names, but in the absence of clear technical explanations of what they are, there isn’t much point repeating them.

The TV has a 3.5-star energy rating and an annual energy consumption of 600kWh per year.

In case you’re wondering about the “hope” I expressed earlier, I’m writing this bit before using the TV in any kind of analytical way. Indeed, as I’m writing, it’s gradually downloading a firmware update (30% and counting). Because, of course, this is a computer as well as a TV. It runs Android (Version 7.0, if it matters) to manage its smart functions. And that means there’s a host of apps available for it. The Android is covered over with a Sony interface, so it won’t look like your phone screen.

The Sony KD-65X9000F TV is highly connectible with 802.11ac dual-band Wi-Fi, Ethernet (only 100Mbps, rather than gigabit), Chromecast and Miracast, Bluetooth, four UltraHD supporting HDMI, three USB sockets, optical audio out and headphone out. Oddly, according to the specifications you can’t record live TV to USB storage. That’s a bit out of step with many premium smart TVs.

There is wide support for playback of media, including high-resolution audio and just about all video formats available.

There’s no fancy pointer remote, but you can use the Android TV app on an Android phone to act as a fairly effective remote. If you want to do heavy-duty web surfing, then plug in a mouse/keyboard combo and the TV becomes a very large browser. It has 8GB of storage, with 6.7GB available for use.

A smart TV means having an account with someone. An Android TV means having an account with Google. The Sony KD-65X9000F Smart TV is an Android TV. If you’re already an Android phone user, you might as well make life easy for yourself during the setup wizard and use your phone to transfer your Google account details to the TV. That cuts out most of the setup work. It was even easier because I used an Ethernet cable, so I didn’t have to connect the TV to Wi-Fi. (The Wi-Fi supports up to dual-band 802.11ac standards.)

If you don’t do that, it takes a little longer, but the process is clear as the TV describes what to do at each point. The slowest bit is when the TV tunes in all the stations.

Towards the end, you have to say whether your TV is wall mounted or on a table top stand. That adjusts the sound tuning to optimise it for the position.

There’s also this thing called “Samba TV” which you can choose to enable during setup. When I first saw it, I thought it was the Linux software that interfaces with Windows file systems, but it’s just another one of those recommendation services. Apparently, it monitors what you’re watching and, after gathering that information, makes what it thinks are relevant recommendations for you for further watching. I don’t use that kind of thing.

The first thing I do with TVs, once I’ve set them up, is send them a bunch of digital files I’ve assembled. These disclose some useful information about how well they work. I started with an UltraHD HDR test clip. This was created by a competitor to Sony to show off the astonishing contrast available on OLED TVs. Usually, LCD/LED TVs simply look flat and unimpressive by comparison.

But the Sony KD65X9000F didn’t look at all like that. No, the black levels on screen weren’t as inky as they would be on OLED, but they were really quite adequate. Subjectively they seemed truly deep. There was no sense of the picture being washed out by the backlights. In part that was due to the intense brightness of the highlights. This was higher than an OLED TV could deliver.

On balance, I’d prefer OLED, but I’d be perfectly satisfied with this TV as well. Especially as it is better than OLED when room lights are on, thanks to that brighter overall image.

Another video test pattern I use is all black, except for two white pixels. This can help show how a zoned backlight is arranged. The first surprise was that there did not seem to be any halo or wider glow around those pixels. It could be that the TV sacrifices the brightness of such small detail in order to prevent the darker area around them from being brightened by the local backlight.

The black screen around the pixels was impressively dark, albeit with a very low level of mottling due to the (somewhat dimmed) backlight breaking through the LCD panel. The panel was a touch brighter with this pattern around the edges than in the middle.

Another pattern tests colour and pixel resolution. Fed as a video file via the network using DLNA protocols, the resolution was perfect. Every line was properly displayed, and properly displayed in the correct colour. Fed using Chromecast, the whole thing was downsampled to Full HD resolution. For the highest quality network video, I find DLNA the best. I have never been able to get Chromecast to deliver 4K resolution.

Feeding the same pattern to the Sony KD-65X9000F as a JPEG image rather than as a video file, again via DLNA, preserved full pixel resolution, but showed a halving of vertical colour resolution. You probably won’t notice when you’re displaying photos on the TV, but this does seem to be an oversight.

The problem with modern TV viewing as that the great majority of stuff we have available to us is not 4K. A lot of it isn’t even full HD. So you want your TV, especially a big 65 inch model like the Sony KD-X9000F, to make those lower quality sources look as good as possible.

This TV does that. Even 576i material – which is what you get from standard DVDs and SDTV – comes up about as well as I’ve seen. The TV does a pretty good job of enhancing the edges and cleaning up the images. When they appear on screen, while not as sharp and precise as full HD, they are sharp enough not to be tiring on the eyes. The TV also does a good job of working out the best method for progressive scan conversion and applying it.

Australian HDTV uses 1080i as its the standard. This TV handled that equally well. Occasionally it approached the quality of UltraHD Blu-ray with this TV.

The other job of the modern TV is to smooth motion. Plenty of TVs can make motion very smooth by creating new frames to insert between the signal frames. But the job the Sony KD65X9000F TV does is perhaps the best in the business. With most TVs, you have to compromise between producing a smooth picture, and the generation of picture distortion. Not with this one. The “Standard” setting produced no visible distortion. It left the picture grain in movies intact. And it made motion beautifully smooth.

Sony’s web page for this TV is here.