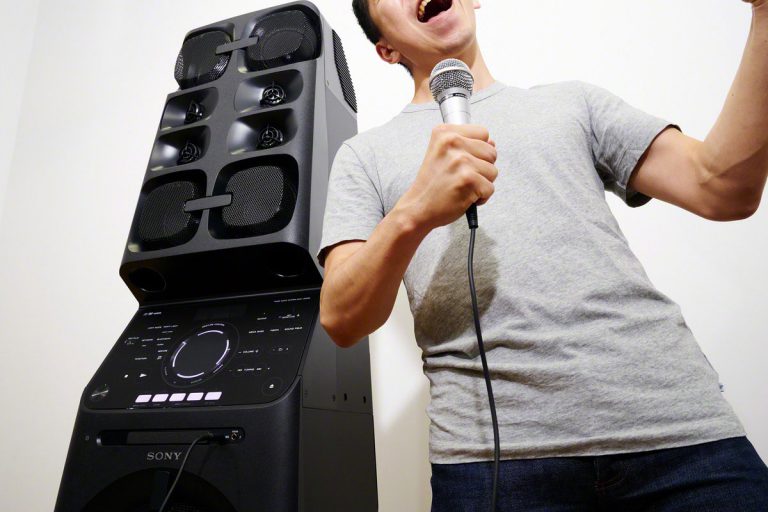 As a slightly snooty hifi guy from way back, I’ve tended to look down my nose somewhat on the brasher kind of audio systems. Their big woofers and flashing lights showing they’re clearly not aimed at this particular type of listener. But when for one reason and another I ended up using one from Sony for a couple of weeks, I  discovered that they weren’t quite what I thought.

Yes, they have those lights (indeed, it was a bit tricky to work out how to switch them off). Yes, they have a microphone input so you can sing along, if your party ends up taking you and your guests that way. Yes, they have big woofers.

But, yes, they actually sound quite respectable. No, not like the similarly priced high fidelity system I would purchase instead, but loud, clean and balanced. So long as I didn’t engage the “Mega Bass” boost function.

Which brings us to Sony’s latest, which it has dubbed a “Tower of Power”. The less sexy official name is the Sony MHC-V90DW High Power Home Audio System.

It stands 1.7 metres tall and packs ten speakers. Sony doesn’t actually say very much about the speaker drivers themselves, but the pictures show it has two woofers in the bottom section – I estimate these as 200mm (that is, eight inch) drivers – and four midrange drivers and four tweeters in the top section. And it’s heavy – over fifty kilograms – so the drivers are likely no lightweights. It has castors attached so it can be moved around.

Sony says that the unit employs a “Spread Sound Generator”, which it describes as “an open back-type cabinet to increase the range and spread of music”. That sounds worrisome. Perhaps they mean a port, as in bass reflex port, which is a very different matter. A real open back cabinet would act to weaken bass output.

It has the inevitable microphone inputs – two of them – and a CD spinner and even a HDMI input for sound from a Blu-ray player. These days, the most important inputs are networking and Bluetooth. It has fine support for networking. That includes Spotify Connect and Google Chromecast. With Chromecast there are a wealth of apps for sending music directly to the speaker, from both Android and iOS devices. That includes Youtube.

Also supported, the DLNA standard which is widely supported by Windows and Android devices. So you can send to it the music on your phone, and otherwise control it with an app. The unit can decode all manner of high fidelity file formats, including FLAC and Apple Lossless up to 192kHz sampling, and both regular and double speed Direct Stream Digital.

It has a USB input, too, so you can play those digital audio files from a USB stick if you prefer.

For those wanting to play and party, in addition to the microphone inputs and full Karaoke functions are LED lights and weird sound processors, including flanger and wah effects and a pan manipulator.

Also built in is an AM/FM tuner.

Sony says that the recommended retail price is $1199.