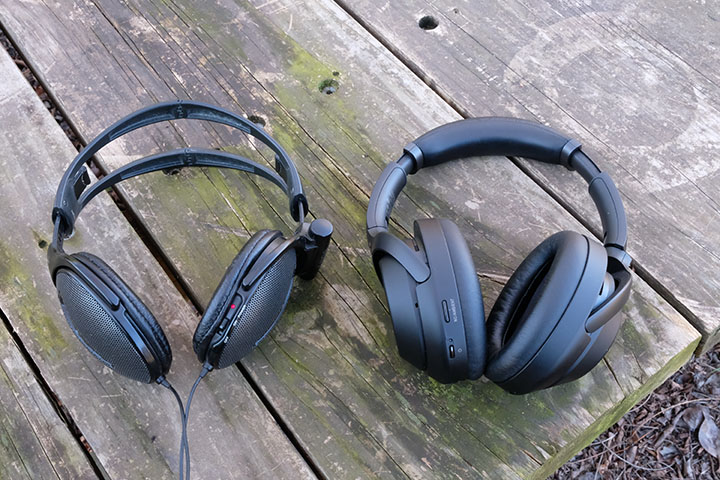 Has the technology has come along at all this past 21 years. By much? By a little. Not at all?

You can read what our editor thought of the latter here. Spoiler: he gave them an overall score of 4.9 out of 5.0.

The MDR-NC20 headphones were very expensive for those days — $299 – as befitted ground-breaking technology. The noise-cancelling models from a certain well-known competing brand didn’t appear until the year 2000.

I laid hands on Sony model in 1998. They are light-weight on-ear headphones with a spidery headstrap. They kind of collapse into a ball for packing away or taking with you. The Sony MDR-NC20 headphones are wired – nothing was Bluetooth in those days. They were powered by a single AAA battery which resided in a pod above the right earcup. Then, as now, Sony made left and right distinct by using red labelling for right.

I won’t go deeply into the Sony WH-1000XM3 headphones. They are thoroughly covered here. But, in short, they are over-ear models that thereby offer a little extra passive noise isolation. They come with a case, and while they also come with a cable to connect to analogue outputs (an airline 2-prong adaptor is included), they are primarily Bluetooth headphones. They support all the higher quality codecs: AAC, aptX, aptX HD and Sony’s own LDAC.

The old Sony MDR-NC20 headphones were specified to reduce noise in the band from 40 to 1,500 hertz. Sony is coy about the noise reduction capabilities of the newer headphones.

I can’t help but agree with my colleague in his review of the Sony WH-1000XM3 headphones. They sound very good. In fact, they sound much, much better than any $400 headphones have the right to sound. Even passive ones. Throw in the Bluetooth, the advanced codecs and the noise cancellation and you have an incredible bargain.

As for the Sony MDR-NC20 headphones, I had a problem. Having pulled them out of storage, I found that the headphones produced no music when plugged into a player. After some tests I have determined that the problem lays in the weak point of older headphones and earphones: cables fatiguing and breaking. Something in the bottom section of the cable something has broken.

I contemplated performing some surgery on the cable, but decided instead to rely on my original review for listening impressions. Here’s some of what I wrote:

Sony took the opportunity of having amplification built into the headphones to flatten the frequency response. This is just as well as the unequalised drivers are rather deficient at both extremes of the sound spectrum, colouring the sound with a distinctive midrange forwardness. The change to a flatter response and a marked increase in sound level (surely more than the 1 dB Sony allege) whenever the circuitry is engaged makes it difficult to judge what differences can be attributed to the noise-cancelling circuitry alone.

The sound quality with the circuit off is inferior in conventional terms, but more attractive and somehow easier on my ears (even after I’ve cranked up the volume). Flicking the switch (and turning down the volume), the effect to my ears is that of a closing in of the sound, a flattening of the distinction between instruments. If these were speakers rather than headphones, I would describe it as a loss of depth, its replacement with a solid wall of sound. The headphone hiss also subtly modifies the higher frequencies, reducing the sense of air that so helps define them. Indeed, it may be this is the sole problem, rather than anything to do with the noise reduction circuitry itself.

The Sony MDR-NC20 headphones are expensive – $299 – and if that was my full headphone budget I would not spend it on them. Better sonic performance is available at that price elsewhere.

So, how to test noise cancellation? Well, the method I use is with airplane noise. A couple of years ago I sat in the rearmost seat of a Dash 8 turboprop airplane on the Canberra/Sydney route and videoed the passing ground through the window. I play that video back on my computer and don various noise-cancelling headphones to assess their effectiveness. I have exceptionally good speakers on my computer, so when I wind the level up to average around 100dB SPL (C-weighted), it’s pretty much like it was on the airplane, except worse.

Now – remembering that noise cancellation was a very new thing for consumer tech back in 1998, I was impressed. Really impressed.

In my review, back then, I prattled on about its effect in various environments, and concluded:

In short, though, the noise-cancelling circuitry effectively reduces markedly masking of music by external noises, particularly in the frequency bands in which it tends to do the most damage.

Is this noise circuitry cost free? Well no, of course. The most obvious cost is that the circuitry produces its own its own upper midrange hiss – at a quite noticeable level, perhaps nearly as loud and of a similar character as audio-cassette tape hiss with Dolby B engaged.

And now? The results with the old headphones are much the same. That 100dB aircraft noise is actually oppressive when played back on my computer speakers. You can tell that after an hour, your hearing is going to feel flattened. When I first put on the Sony MDR-NC20 headphones, it makes hardly any difference. They don’t offer a great deal of acoustic isolation. But when I switch on the noise cancellation, there is definitely a significant difference. The noise is still there. It’s still quite strong. But the edge has been taken off it. It is no longer oppressive. I get the sense that were I to play some music I’d be able to hear it over the still prominent environmental noise.

As I wrote twenty-some years ago, about using them on an Ansett (remember them?) Boeing 737 from Canberra to Sydney:

The Sony noise reduction circuitry did its work. The headphones reproduced with reasonable fidelity the flutter-laden channels provided on the in-flight audio system and, thankfully, permitted the program material to be heard – even during take-off and landing.

So how about 2018’s Sony WH-1000XM3 headphones? Of course, they’re be better than those old ones on the noise-reduction front, right? Yes. Astonishingly better. Almost incomparably better,

You think I’m exaggerating? No. As I’ve made clear, I’ve been reviewing noise reducing headgear for more than twenty years. I know this stuff. The noise almost entirely goes away. Not just the midrange, but most of the treble and much of the bass.

But bass is a persistent problem. Deep, loud bass assaults your body as well as your ears. I noticed a strange sensation when I turned on the noise reduction in the Sony WH-1000XM3 headphones. There was this weird sensation in my torso, as though it were being lightly pummelled at a great rate.

And it was. The physical impact of high volume levels in the deeper bass can be felt by your body. But, generally, you don’t notice that because the sensations from your ears dominate. Remove the sound though, and you can sense that.

Of course, asking headphones to do something about that is silly.

Oh, and although I barely need to say it, the new headphones do not produce objectionable hiss.

The Sony MDR-NC20 headphones cost $299 back in the day. According to the Reserve Bank of Australia’s Inflation Calculator, that would amount to the oddly specific amount of $502.44 in 2018.

The Sony WH-1000XM3 headphones cost only $395. They sound far, far better and they truly do cancel noise way, way better.

We live in amazing times!