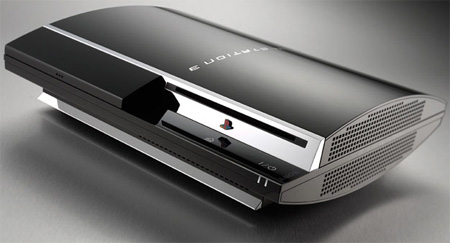 UPDATE 3 MARCH, 2009: We have a new PlayStation 3 review, looking at it purely as a Blu-ray player.

Here it is – the PlayStation 3. The AV device everyone has been waiting for. The ultimate entertainment package, all things to all men (yes we’re being gender specific), the little box that could, the only thing you’ll ever need inside your entertainment hutch.

Well, perhaps not quite. But the PlayStation 3 is a significant step forward in the quest for a multipurpose lounge-based data and entertainment hub that’s cheaper and easier to use than a PC.

What Sony has achieved with the PS3 is similar to its earlier product the PlayStation Portable. As the PSP redefined handheld gaming, the PS3, while technically in the same generation as the Xbox 360 and the Nintendo Wii, nevertheless feels like a device half a generation ahead. The long delay, far from hurting Sony, has allowed the company to produce a more polished, a more powerful, and most importantly a more adult device than anything

The PS3 is the first lgames console that you – the 35 year old merchant banker who wants to look at photos on a 50 inch LCD TV and maybe play a couple of serious and realistic car racing simulations on weekends – won’t feel faintly embarrassed having stacked on top of the rest of your serious, adult entertainment gear.

Forget the Wii’s sleepover party control dynamic, forget the Xbox 360’s ridiculous candy-coloured interface, the PS3 is a proper AV device that deserves to be plugged into your $10,000 rack.

But is it perfection in a glossy black case with subtle silver highlights? Not quite.

It seems clear that Sony realised there was no way to effectively sell the PS3 on games and gaming alone. There are already plenty of devices in the market, and the company’s own product, the PS2, costs less than $250 in most places and has a massive library of games to choose from.

Yes, the graphics on the PS3 are better and take advantage of 1080p displays. And they do offer new online elements because after all, online gaming is now part of the console experience. But as always, the success of the PS3 as a gaming platform will depend less on the hardware and more on what developers do with it. Still, it seems counterintuitive to suggest that now the most successful console brand ever has powerful new hardware, it won’t continue to boast a library of games that seriously challenges its older rivals.

So gaming will still remain a dominant element of the platform, but the PS3 also boasts some clever and effective media management tools. By combining standard interfaces – USB2.0, Ethernet, Bluetooth and 802.11g Wi-Fi – with Sony’s custom hardware, the PS3 aims to offer the same functionality as a PC-based media server, but one that works faster, more stably, and more intuitively.

The online component of the device also allows for socialisation via friends lists, messaging, and an online 3D community called ‘Home’ to be launched later this year.

And finally, despite its seemingly exorbitant price as a games console (note: at launch the PS3 was $999, the price has since dropped to $699), the PS3 is the cheapest Blu-ray player on the market, especially when you consider it offers 7.1 surround and high definition video (1080p) via its HDMI terminal.

If your system is not HDMI-equipped, component video and optical audio are your fallback options for serving up high definition video and multichannel soundtracks. If your AV receiver provides only a coaxial audio connection, however, you won’t be enjoying any surround sound through your system at all, as the PS3 only offers surround via optical or HDMI.

Gaming on the PS3 is as games consoles have been since optical drives were incorporated into the format. Stick in the disc, and away you go. The SIXAXIS controller is very similar to the older Dual-Shock PS2 controller, but is extremely light. Unlike the Xbox 360 controller, the SIXAXIS doesn’t have removable batteries. Sony includes a USB cable to charge it. Time will tell how long the controller will last before you need to take it to a service centre for a new battery. Will there be an iPod battery controversy all over again? We’ll see.

Like the Wii, the SIXAXIS controller has motion-sensing capability, but initial implementations suggest a less excitable model than Nintendo. The remote can be tilted to fly a plane or rotated to steer a car, but some of the arcade games available at the PlayStation Store use flicking or shaking actions to launch special attacks and similar trick moves.

The PS3 uses the Cross Media Bar (XMB) interface pioneered on the handheld PSP. While qualified ergonomists will probably be unimpressed, the clean lines and minimalist icons do a lot to make the device seem like a serious bit of kit, and not an expensive and over-indulgent toy.

Importing media – be it music, photos or video – onto the PS3 is relatively simple. You slip in the CD, flash card or USB external hard drive, whereupon the interface detects the kinds of files on the storage media and associates them with appropriate menu items  (music, movies, photos) ready for you to access. These files can be copied – and at lightning speed – to the hard disk, which you can upgrade with an off-the shelf larger capacity drive as needed – but play back just as quickly and easily off the connected device (MP3 player, camera, PSP). We had trouble with our external hard drive, however, where the PS3 would find the folders the music was in but couldn’t locate the actual tracks.

And it seems Sony’s proprietary gates are not fully dismantled yet, as certain devices and formats simply won’t work with the PS3. The Apple iPod connects but won’t display any of its music, while the long-standing corporate animosity between Sony and Microsoft is evident in the console’s total lack of support for WMA and WMV file formats.

The PlayStation Store, a menu item that allows you to buy downloadable games and demos, works extremely well. If you have a fast net connection (we tested with 20Mbps ADSL2+) even very large demos of almost a gigabyte download in the time it takes to make a coffee and flip through a magazine. You can’t play games while downloading, which is unfortunate, though you can of course listen to music and browse photos at the same time.

Actually getting the device connected to a network is very simple, assuming your network is well set up. Users who have a router that takes care of the home internet connection will have no trouble. Just point the PS3 to the wireless network, enter security codes if necessary, and you’re away. Wired connections are even easier – just plug the device into the Ethernet cable. Users of USB ADSL modems that connect directly to their PCs should consider upgrading to a router.

Blu-ray performance is acceptable. Dolby 7.1 surround is supported (although DTS HD 7.1 isn’t) but movies exhibit the same jerkiness we’ve experienced from other Blu-ray players which export video at 1080p/50/60 frames per second rather than the optimal 1080p/24 frames for per second. This is a limitation of all current-model Blu-ray (and HD DVD) players and, while eliminated in standalone players appearing later in the year, will be an enduring bugbear of the PS3.

Disappointingly, and unlike the Xbox 360, there’s no AV-style bar remote in the box. Controlling photos, music and Blu-ray with the SIXAXIS game controller does dent the PS3’s otherwise very adult profile.

The PS3 is a much better multi-purpose device than the Xbox 360, which claims similar functionality. Media management is better integrated, web browsing (while not fully standards-compliant) is more straightforward and the social elements of the device mean you could seriously consider buying it as a low-cost Blu-ray player with funky online functionality, and never boot up any retail games at all.

As a games console, the PS3’s high price is likely to make parents think twice before splurging on it for the rumpus room. But conversely, young professionals may now buy into the gaming space because they can justify the purchase based on the additional features.

If you can stomach the cost, grab the optional AV-style remote ($49.95), sit back and enjoy a sophisticated and very modern entertainment device. One that might still be firmly in touch with its inner child, but doesn’t kid around when it comes to functionality.

We wrote our PS3 review using a unit from overseas, shipped to us specially. It was running the 1.0 version system software, and so some of the comments in our review were based on the functionality that version of the system offers.

Buyers of the Australian PS3 should immediately run “System Update” under System Settings. This upgrades the system to version 1.60.

This new version addresses some of the issues we had with the device. There’s now an option to enable WMA playback (though bafflingly this, and ATRAC support, are switched off by default). No word on WMV yet though.

For fans of the PlayStation Store, when you purchase a game or start a download, there’s now a button to “Download in Background”. This allows you to either continue browsing the store, or even drop back to the XMB interface and use the machine’s other functions while it downloads. A discreet message will appear in the top right hand corner of the screen when the download is complete.

Something to note: when you download in the foreground, the PS3 automatically installs the game when the download completes. A background download adds the game’s install files to the Game menu. Fortunately most games only take a few seconds to install.

The nature of a multimedia device with online connectivity means the PS3 will have numerous system updates in the future, which will improve functionality and even add new features. We’ll be sure to keep you posted!