Sony PlayTV in stores this Thursday 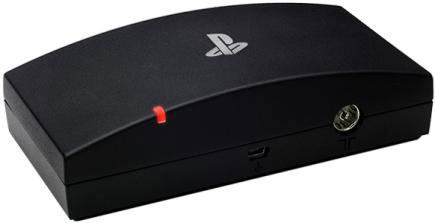 The Sony PlayTV, a little black box that turns your PlayStation 3 into a PVR (or DVR, call it what you will) was launched today, and will be in stores on 26 November.

We first saw the PlayTV device around 18 months ago – Sony say the reason for the delay is that Australia waited for the high definition version, the version on sale elsewhere in the world has been standard definition.

So you connect the aerial to the PlayTV box, then connect PlayTV to the PlayStation 3 via USB, and then the PlayStation to the TV, and voila, your PlayStation becomes a personal video recorder with a 7-day electronic program guide (EPG) – 8-day really, being the present day and then 7 days forward. Robin Parkes, the CEO of Freeview, said that an extended version of the EPG is in the pipeline.

Onboard the PlayTV is a twin HD TV tuner, so you can:

If you’re worried about the limitation of storage, and want to upgrade either the inbuilt 120GB or 250GB non-proprietary hard drives of the current PS3, then you do have the option of upgrading your PS3 with a larger hard drive. Sony stated outright that this action would not in any way void the warranty of the PS3.

The PlayTV is Freeview-compliant, which means that yes, you will be able to watch all the free-to-air channels (as you could even if it wasn’t, Freeview is essentially just a marketing umbrella for the free-to-air channels), including the new HD channels, given the HD tuners. It also means the fast forward speed will be restricted to 30x speed.

As a standalone, the PlayTV has an RRP of $169.95. If you’re buying the 250GB version of the PlayStation 3, which has an RRP of $599, then the PlayTV will be bundled in for free. When asked if this was a limited time bundle offer, Michael Ephraim, the Managing Director, Sony Computer Entertainment Australia, said there are no plans – now – for a time limit on the offer.