Sony puts on the Santa suit – bonus game with PlayStation 3 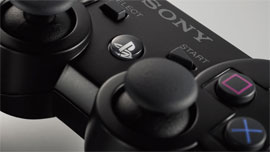 Sony Computer Entertainment Australia (SCE Aust.) this week announced a four million dollar Christmas marketing campaign for its leading range of PlayStation platforms and exclusive software titles. Spearheaded by PlayStation 3 (PS3), the campaign will showcase the ‘world of entertainment’ that only PlayStation can deliver to all entertainment seekers, with both hardware and software set to be promoted through an integrated campaign that includes TV, online, experiential, PR, plus a strong retail presence, all in the lead up to Christmas.

SCE Aust. also confirmed that it will be offering one bonus game with every PS3 purchased during the holiday season, starting from today. Consumers will have the choice between LittleBigPlanet, SingStar ABBA, MotorStorm Pacific Rift and Resistance 2, as and when each new blockbuster title is released over the coming weeks. All games are exclusive to PS3 and valued at $109.95.

One of PlayStation’s most eagerly anticipated games ever, LittleBigPlanet, featuring the charismatic Sackboy, is released today and expected to be under the tree of many gaming fans this Christmas. A game that so defies convention it’s been given its own genre; creative gaming.