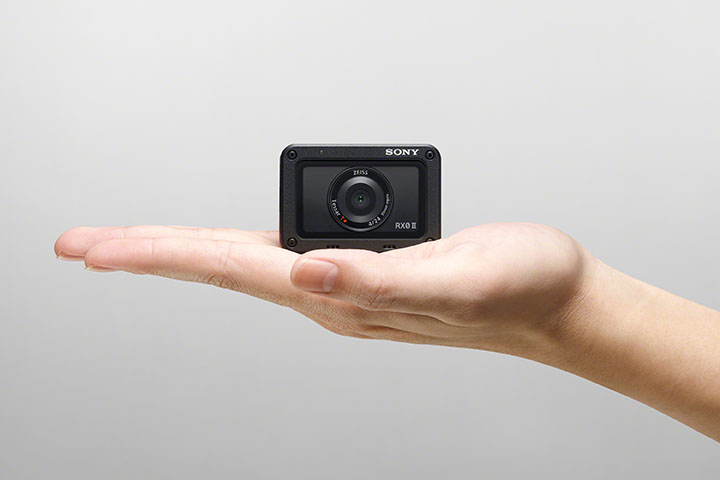 My goodness, the Sony RX0 II had me confused for a while. Lately I’ve been using various action cams, so perhaps I can be forgiven for thinking that that’s what this is. After all, it’s shaped like one and it’s the size of one. And, well, it kind of is, as we’ll see. But it is principally a still camera.

Indeed, it uses Sony’s still camera designations. It says “Cybershot” on the box and the formal model number is DSC-RX0M2G.

So what’s it all about? I guess Sony’s marketing tagline is apt: “Waterproof, dustproof, shockproof and crushproof, this camera really is invincible, making it a must have for the holiday season and any adventures you have lined up for the warmer weather.”

Yes, the Sony RX0 II is small and boxy. It’s 59mm wide, 41mm tall and 35mm deep and weighs only 132 grams, loaded with battery and microSD card. It’s IP68 rates. The 6 means it’s dustproof. The 8 means it can be immersed in more than a metre of water. Sony says that it’s good for use at depths of up to ten metres.

It’s shockproof according to military two-metre drop standards onto plywood. And crushproof, to 200kgf. That means I ought to be able to stand on it, without problems. Of course, as the footnotes on the Sony RX0 II specification page note, if you start dropping it from heights of a couple of metres, waterproof performance may suffer.

That crush and drop stuff is based on the fold-out screen being properly in place.

Yes, as I said, this is a still camera. There’s a rear monitor as there is on an action cam, and a glass-protected lens on the other side. But the monitor can fold out and up, so you can take selfies. The monitor is not touch sensitive. Given that it’s only 3.8 cm in size, touch sensitivity wouldn’t really offer much. Its resolution is 230,000 pixels. There is no regular viewfinder, of course.

On top is the on/off button and the shutter release. There are six more tiny push buttons around the edge of the screen, most of them multi-purpose. Next to the monitor is a Micro-B USB connection for power and photo transfer, a 3.5mm socket for connecting an external microphone and a micro-HDMI socket for outputting videos and photos on an external monitor. With them is the slot for the microSD card. They are all concealed under a removable waterproof cover.

In addition, the camera supports Wi-Fi (2.4GHz only) and Bluetooth, so you can use it with Sony’s camera app.

Sony says that the battery is good for around 240 photos or between 35 and 60 minutes of video shooting, depending on various settings.

The lens is a proper one: it’s a ZEISS Tessar T* lens with 6 elements in 6 groups. It has a fixed aperture of f/4 and a fixed focal length of 7.9mm. With the 13.2mm x 8.8mm Exmor RS CMOS sensor it works out to a 24mm-equivalent focal length in traditional terms. That’s an 84-degree field of view. Focus range goes down to 200mm.

Movie recording goes up to UltraHD at 24, 25 or 30 frames per second. Full HD can go up to 120p in regular mode, and there are a bunch of high frame rate modes up to 1,000 frames per second in 1080p. In 4K mode it uses the full sensor (at least to the appropriate aspect), not a crop.

You know all the modes that a modern camera provides? Well, most of them are here. You can shoot in RAW. There are intelligent scene identification modes for both movie and still shooting. You can bracket exposures, burst shoot, choose picture profiles and styles.

There are a couple of electronic zoom modes. One just crops down the frame, one’s a digital zoom and one’s called “clear image zoom”, which goes up to 2x “with minimal loss of quality”.

There’s one significant problem with using the Sony RX0 II camera: it’s so very small. Apart from the two buttons on top, all the controls are tiny. The text around the monitor is almost microscopic at times. The menu display is small.

To change many settings, and select some of the things that are close to hand on a larger camera, you have to dive into the menu. For some functions you need a little patience to invoke them.

Sony included the GPVPT1 Shooting Grip With Mini Tripod with the review camera. The $149 it costs is a good investment. The camera has a standard 1/4 inch mount on the bottom. You screw it onto grip and plug the grip’s cable into the Micro-B USB socket. You can then start and stop video with one button, take photos with another one and use a slider to zoom. (The camera is not waterproof in this mode).

That’s what I used during the test. It solved the handling problems for me.

So, how good were the pictures and videos it took? To help answer that question one should ask: compared to what?

For a camera this size, I decided to compare it to my phone, a Huawei P30 Pro. Its camera is up there close to the best presently available in a phone. With its standard lens it has a shorter focal length and a roughly similar field of view.

The photos I took with the Sony RX0 II camera were very good. The automatic settings were highly reliable for colour, brightness and focus. There wasn’t much difference in the level of detail between the phone and camera, although these was a little less JPEG compression smear with the latter. It tended to produce JPEG images sized around 8MB, or twice the size of those produced by the phone.

Where the Sony RX0 II camera stood out clearly better was in the far more natural processing, which avoided the sometimes artificial-looking enhancements applied by the phone.

Its photos were smooth and realistic.

The video performance was very good too. Again, the video looked highly natural and realistic. But there is no in-camera stabilisation, which puts it behind some phones and certain action cameras such as the GoPro Hero 8.

Or maybe not. You see, the Sony Movie Edit add-in for the camera app – available for iOS and Android – allows you do stabilisation in post along with a lot of other video manipulation, including re-framing the video. And that tends to have more control and flexibility than in-camera stabilisation.

And do remember, the GoPro camera is nowhere near as flexible or controllable for still photography.

A last thing to note: again, you’ll need patience if you want to transfer your photos via the USB connection. For me, it managed speeds that rarely hit 20MB/s. It’s probably best to pop the microSD card out and put it in a fast card reader.

The Sony RX0 II camera is ideal for someone who prioritises compact size over handling convenience. Within the limitations of a fixed focal length, it takes excellent photos and video.