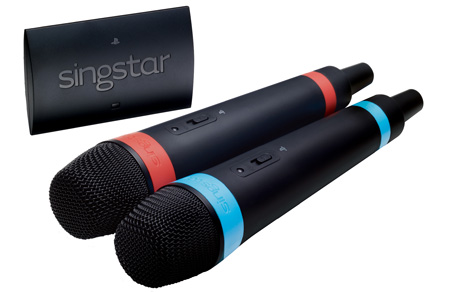 Let’s just say right out of the gate – right out of the box, in this case, and what a lovely presentation box it is – that the new SingStar microphones from Sony are superb. Unlike their competition, the funky Lips microphones from Microsoft that connect to your Xbox 360 only when they feel like connecting and don’t give clear indication when they do eventually find your console, the smart SingStar wireless microphones are a dream to set up. Stick the batteries in the units, push the switch all the way up and you’re good to go. There’s a small receiver unit to connect to your console by USB, but it’s designed sympathetically enough to match your PS3 console and sits happily atop the unit shining its cute little green light at you.

SingStar has been a phenomenal success for Sony, with over 16 million units sold worldwide since its original launch on the PlayStation 2 back in 2004. Since then, there have been over a dozen SingStar releases, focusing on various genres or even single bands, like with the recent SingStar Abba release. The new batch of SingStar games includes another one – Queen this time – and really, does it ever get old yelling ‘Bohemian Rhapsody’ at the top of your lungs into a microphone? No, no it doesn’t, is the answer, even if it does always immediately bring Wayne’s World to mind.

The biggest surprise when starting the game proper has to be the new voice recognition capability – instead of having to connect a regular controller to navigate all the menus, the new Pop Edition software allows players to use voice control to zip through the menus and, best of all, the voice recognition is first class. It not only responded perfectly to my voice, instantly zipping through the music collections and moving between gameplay options, but did exactly the same when my five year old son excitedly grabbed one of the mikes from me.

Now in its second year gracing the ‘next-generation’ machines, there wasn’t any real reason to buy the PS3 version of SingStar until now – the voice recognition is excellent and the online ‘SingStore’ (see what they did there?) shop is stuffed full of more than 1,000 tracks for you to download, new tracks also available in SingStar SongPacks (OK, the pointless capitalization is getting a bit tiresome by now, marketing dudes) of five tracks for around 10 bucks each. So if there’s a PlayStation 3 in your household, you’ve just found the perfect Mother’s Day present for May 10! – get the Pop Edition disc if you want the excellent voice recognition feature.