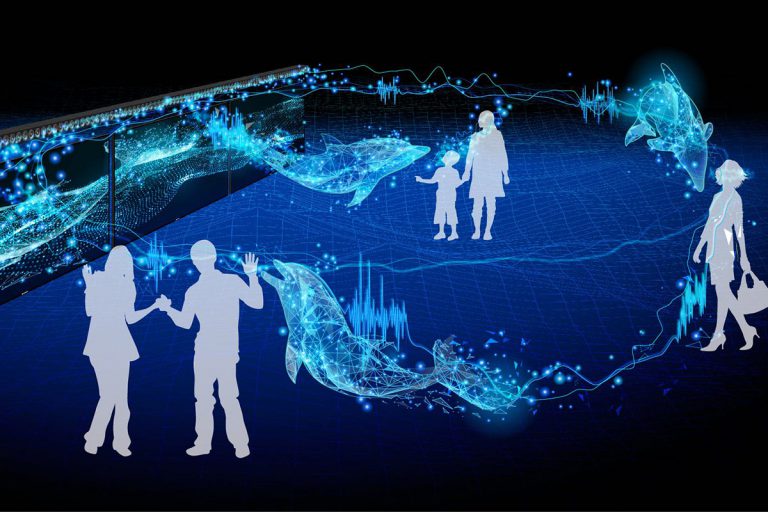 We mentioned it last month when it appeared at Europe’s ISE 2018, but now we’re getting a better handle on what it’s all about. Sonic Surf VR is a special technology for presenting the audio side of virtual-reality-like experiences in public spaces … without the need for headphones. Which, let’s face it, don’t really work all that well in public areas.

Sony calls Sonic Surf VR “a unique suite of spatial audio technology combined with new multi-channel speakers and specially developed software”. This allows it to “partition” sounds. That is, it can aim sounds so that they are directed at just one point in the space. That allows it to create “an interactive space where sounds move freely around within a space to create immersive experiences.”

Sony’s Brad Hanrahan, notes that presently, Virtual Reality is mostly about the visual experience, but he points out that an audio solution such as Sonic Surf VR “can produce powerful space of sound and further enhance VR experience by enabling multiple numbers of people to enjoy simultaneously without headphones”.

The system is intended for many public applications, including “theme parks, special events, exhibitions, museums, aquariums and corporate showrooms”.

There are two demonstrations of Sonic Surf VR at SXSW 2018. “Ghost Whisper” provides “a series of simulated paranormal events designed to stimulate the senses, surrounded by the immersive sounds.” This demonstrates Sonic Surf VR’s “virtual sound partitioning”. Sony says that “sometimes certain sound can be only heard by a selected person, even if all are in the same room.”

The other demonstration, called “Acoustic Vessel ‘Odyssey’” delivers music tailored to each person in the space. It uses an astonishing 576 speakers and “sound field synthesis technology” to deliver this.

Sony Sonic Surf 2018 will be available from June 2018. It combines “Sound Field Synthesis with speakers, a control unit and software based on an algorithm unique to Sony. It is also scalable depending on customer needs and location size”.