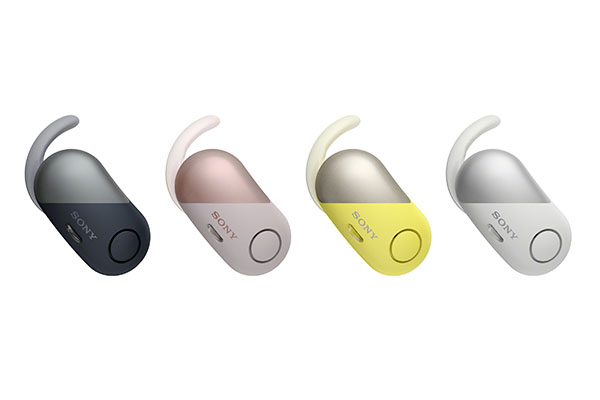 They sound good. But does the “Digital Noise Cancelling” in the Sony Sports WF-SP700N wireless earbuds actually work? I’m not so sure.

If you’re using an Android phone, they’ll use the basic SBC codec. With iPhones, you get the higher quality AAC codec. They support NFC for easy pairing. You can also use them for hands-free operation. There’s also an app to control the headphones and update their firmware. The app can also apply a number of preset EQ curves, but there’s no option to create your own.

The buds use 6mm drivers, each of which is contained within a sealed enclosure. They are rated at IPX4, making them sweatproof. With the largest silicon tips fitted and the standard fins, they each weigh 8.1 grams according to my scales. There are four pairs of tips in three sizes, along with two sizes of fins. Combined, the case and buds weigh 59.7 grams. The case is pocketable at 38mm thick and 61 by 59mm, width by depth. The buds themselves are available in four colours.

Even without active noise cancellation, silicon tipped earbuds provide some isolation from the outside world. The earphones have an “Ambient Sound Mode” which pipes outside sounds into the music stream. That can be useful if you’re outdoors and hope not to be run over by a bus.

The battery life of each is up to three hours. The charge case can give them two more full charges. It takes three hours to charge fully the charge case, and 1.5 hours to charge the buds inside the case. But the first fifteen minutes of charging the buds will give you up to 70 minutes of listening. You charge the case via Micro-B USB. You supply the charger. Sony supplies the cable.

Sony specifies the “waiting time”, which means when the earbuds are on, but there’s nothing happening. That’s up to 35 hours, it says, but only if noise cancelling is switched off. If it’s on, the “waiting time” reduces to 8 hours.

The charge case is a little different to those I’ve seen from others. First, the lid is hinged at the back and swings out to the side, rather than lifting up. It is held in place with a gentle, but adequate, grasp from a magnet. Second, rather than the buds themselves lock in mechanically, rather than magnetically. The fins act as a spring. As they go into place, a small red LED shines in each so that you know that there is a proper electrical contact.

The default sound of these headphones was quite sweet on ballad-like material, such as Deep Purple’s “When a Blind Man Cries”, but a bit bitey on harder-edged content, like Eminem’s The Marshal Mathers LP. You can tame that by choosing the “Mellow” EQ setting.  Bass was clean and reasonably solid, if a little quieter than I would have preferred. There was plenty of gain, so even quietly encoded music could be delivered at a decent level.

According to Sony’s website, the Sony Sport WF-SP700N earphones include Sony’s trademarked “Extra Bass”. “Select”, it says, “EXTRA BASS for powerful, punchy low-end sound to give you the drive to keep going.” I could find no way to select Extra Bass. Nor could I find it in the “Help” section of the app.

The earbuds fitted securely in my ears and didn’t move as I stomped about the place. The Bluetooth connection with a Google Pixel 2 XL went out to a solid twenty metres, regardless of orientation. Indeed, these earphones had amongst the most reliable of connection of any I’ve used.

Um, well, what can you say. Active noise cancellation systems work well, or they don’t work well. Or, in the case of the Sony Sport WF-SP700N earphones, they seemingly don’t work at all.

I was cooking dinner, and the extractor fan was making its usual noise, most of the energy in the mid-frequency ranges. I pressed the button, and the voice in my ear announced, “Ambient sound”. And now the sound of the fan was a touch louder, with a tilt towards more high frequencies. So that part worked, allowing me to hear the outside world a bit better.

I pressed again, and the voice said “Off”. The outside noise went back to what it had seemed before “Ambient sound”. I pressed a third time. “Noise cancelling,” said the voice. The noise? Identical, it seemed to me.

I went to a quiet place and cycled through again. Whenever I got to “Noise cancelling”, a fraction of a second after the announcement I could sense the distinctive application of noise cancelling. It’s common to all active noise cancelling headphones. It feels as though there is sudden, slight variation in room pressure, accompanied by just barely perceptible white noise. Modern noise-reducing headphones keep this effect down to something you really have to listen for, so there’s no discomfort involved.

So, it seemed, something was happening. But nothing that reduced the noise.

Standard noise reduction test time! I played a video clip I took on a turbo-prop airplane a couple of years ago at an average of 100dB (C-weighted). I switched the noise cancellation on and off. No perceptible difference. I played a crowd noise I recorded last year at 90dB (C-weighted). No effect. I turned that down to 80dB. No effect.

For all practical purposes, the noise cancellation in these earbuds does nothing.

The Sony Sport WF-SP700N earphones are actually very good earbuds, well designed, comfortable and with respectable sound. Just don’t expect to get anything much out of the active noise cancellation.