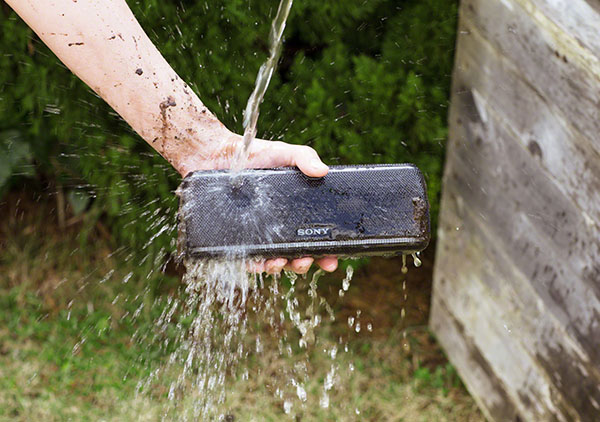 I’ve been dismissive of it before, but the “Extra Bass”function in the Sony SRS-XB31 Bluetooth speaker lifts it above most.

And should you drop it in the drink, all should be fine. Sony rates the speaker at IP67, which means that it’s totally dust-tight, and can survive a dunking in a metre of water for up to half an hour. It comes with a plastic pseudo weave covering that absorbs some of the impact should you drop it. You can choose red, blue, white or black models. The review unit was red.

Inside are two 48mm full range drivers, with a passive radiator between them. A passive radiator is a kind of weighted panel – sometimes it’s just another speaker driver but without any wires. It is designed to convert the energy from the inside of the enclosure into sound. Remember, if the speaker enclosure is sealed, the air inside it is being repeatedly compressed then released as the driver cone vibrates. With a properly chosen passive radiator, the bass portion of this energy can be released into the room. That provides deeper and more powerful bass.

Sony does not mention how powerful the internal amplifier is.

It uses Bluetooth as the main means of signal inputs, of course, but it also has a 3.5mm stereo socket for analogue inputs. That socket is in a recess on the back underneath a silicon/rubber panel. With it is a Micro-B USB socket for charging up the unit, and a Type-A USB socket for powering your phone, if necessary.

There are the usual control buttons on the top for switching the unit on and off and for putting it into pairing mode and play/pausing. That last button can be used to skip tracks forwards and backwards if double- and triple-tap.

There are also three control buttons in the recess under the cover. One is for adding another Sony SRS-XB31 speaker so that they can form a stereo pair. Another links the speaker in with several others to form a “Wireless Party Chain”. That is, a bunch of similar speakers can be scattered around, providing the same music across a larger area.

The third button is dual function. A quick press makes a voice tell you the battery level to the nearest ten per cent. Hold it, and you can switch the lights on and off.

Lights? What lights? Well, tracing the front grille all the way around, and down the sides to the back, is a strip of (presumably) LED lights. There are also two bright white LED lights under the grille near the left and right edges. I was startled when I first charged up the unit, paired it to my phone and listened to some music, to see this light band pulsate in a wide range of colours to the music, while those white lights flashed under the grille.

They are on by default.

The glitzy default light setting isn’t the only one available. But to change this, as with several other settings of the Sony SRS-XB31 speaker, you must install the Sony Music Center app on your phone. This was formerly known as SongPal. It’s available for both Android and iOS in the usual stores. There are a dozen different light modes to choose from. I kind of liked the default “Rave”, but you can try things like “Calm Cinnabar” if it’s all a bit too frenetic for you.

I wasn’t going to bother too much with the app, but I had noticed some disappointing aspects to the speaker. First, although the packaging makes it clear that the speaker supports the AAC and LDAC codecs, my Google Pixel 2 XL only reported the Bluetooth standard: SBC. Both AAC and LDAC provide higher audio quality than SBC.

It turns out that, by default, the Sony SRS-XB31 is locked into an SBC-only mode out of the box. To enable AAC and LDAC, you have to switch them on using the Sony Music Center app.

So get the app. Amongst other things, it allows you to change the sound mode (Extra Bass is the default, but Standard and Live Sound are also available) and use a three band equaliser. By default, the speaker switches off after fifteen minutes of doing nothing. You can disable off.

And you can switch on the …

Yes, Party booster. Is that a fancy sound mode? No, you’ve got “Live Sound” for that. Party Booster turns the speaker into a percussion instrument. You can assign one of fifteen sounds – “Synth Tom”, “Explosion”, “Cowbell” etc. – to five different spots on the speaker. You whack the relevant spot – either side, top, bottom or front – and the noise comes out.

A gimmick, to be sure, but once a certain blood alcohol level has been attained, it could be fun.

If you have an Android phone with NFC, then you can pair via a tap. That’s how I did it with the Google Pixel 2 XL. Later I also paired it in the conventional way with a Samsung Tab A. When I did that the Sony Music Center app, which happened to be on that device,fired up.

Later I went back to using the Pixel 2 and found that I had the same app on that as well. But it hadn’t fired up automatically. I started it, and it found the Sony SRS-XB31 speaker but said that further action was required. It wanted the phone to pair with the speaker. Which it already was. After fiddling around ineffectually for a while, I fixed it by telling the phone to “forget” the speaker. Then I started the app again and went through it to do the pairing. All was fine then.

After making the setting change, the Google Pixel 2 reported that it was connected to the speaker using the LDAC codec.

So why do you have to switch this on? Another Sony product I use also has that option in the Sony Headphones app, but this one explains that choosing SBC provides for a more stable connection. That makes sense. Things like LDAC use a higher bitrate to achieve their higher fidelity. That would be likely to result in a more fragile connection. Sony has sensibly defaulted to reliability rather than slight improvements in fidelity. Those improvements in quality are unlikely to be particularly noticeable on a speaker such as this, respectable though it is.

By golly, this is a fun speaker. I did most of my listening in the default state of “Extra Bass”. I experimented briefly with “Standard”, but it sounded rather empty after “Extra Bass”. EB doesn’t so much boost bass beyond where it should be, as produce a fairly balanced level, at least at higher levels. I ran through a Spotify playlist at a comfortable playing level, and the sound was indeed balanced. When some late sixties Three Dog Night came on, the bass guitar was full and easily followed. Other tracks delivered a surprisingly impressive kick drum. Initially, I suspected that what I was hearing was mostly the second harmonic of thud rather than the fundamental. But my later measurements said something quite different.

It seemed to my ears that the bass boost from “Extra Bass” was variable, depending largely on the volume level. When it was up higher, there was less boost. When the music was quiet, there was more.

The overall tonal balance of the Sony SRS-XB31 speaker was fine. The sound was clear. There was no screechiness in violins, nor undue emphasis of sibilance. As I said at the outset, this is a fun speaker for listening.

Clearly there are modest limits to the maximum volume levels available. No head-banging stuff here. But good, comfortable levels.

I was interested in how extended the bass was from this speaker, and what effect was exerted by the “Extra Bass” circuit.

Surprise: the output of the Sony SRS-XB31 speaker is solid down to 50 hertz in all modes. That encompasses a surprising amount of that aforementioned kick drum’s energy. Below that, the output drops off very sharply. I’d guess that it’s not just the physical design of the speaker. I’d say that Sony has built in a filter. That stops the device from wasting energy and effort on trying to reproduce tones that it couldn’t do very well with anyway. And it stops those tones from restricting the speaker’s capacity with other, higher frequencies.

At low volumes – measured at 73dB SPL (C-weighted at one metre) the “Extra Bass” function added from 6dB to 9dB of boost from 60 to 100 Hertz. With the output set to 10dB higher, the “Extra Bass” merely provided a flat output all the way down to 55 Hertz. In “Standard” mode at the same volume setting, the bass output was down by 6dB.

Sony says that the Sony SRS-XB31 speaker can deliver up to 24 hours of battery life. The footnotes indicate this is with the “Standard” mode and the lights off. I used it for closer to twelve hours in “Extra Bass” mode and the lights on – the default state – before it switched itself off. It takes up to five hours to charge, although I found it was up to 70% within about ninety minutes.

The fact that you can disable the automatic no-signal power-off within the app is a very useful thing. It means that you can leave it plugged into power the whole time and have it available for use. Alternatively, there’s also a setting that keeps the Bluetooth circuitry running while the rest of the speaker is powered down. That allows it to switch on automatically when you want to listen.

The Sony SRS-XB31 Bluetooth speaker is a surprisingly fine sounding unit, with some additional fun features. I remain amazed about how good a small speaker can sound these days.

Sony’s site for the speaker is here.