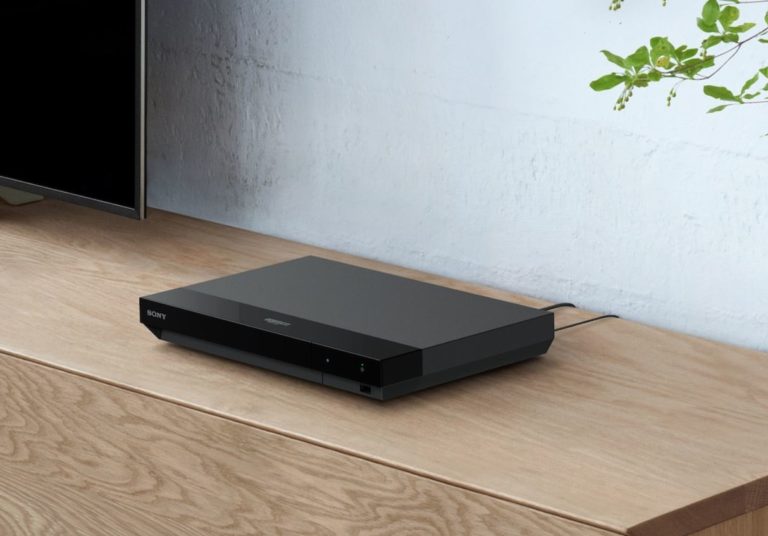 The Sony UBP-X700 and its bigger brother UBP-X800 are the latest in Sony’s range of true 4K Blu-ray players.

The Sony UBP-X700 was our reference device for the recent round of TV tests. Some TVs had Dolby Vision, and Atmos sound and some did not. Let me tell you that nothing, including Netflix 4K streaming, compares to a dedicated 4K, Dolby Vision/Atmos Blu-ray player. You miss so much with streaming and standard 4K HDR TVs!

What is a Sony UBP-X700 Blue-ray player?

Another black slab. I guess this is de rigueur for AV stuff these days. Having a few colour choices might be nice.

Importantly it has both an HDMI ARC port and a separate HDMI sound only out port.

Sony’s high-end TVs use Android TV which is very tile-oriented. The interface is similar but is more sensible and straightforward.

It will also identify a DLNA source on the same network. MiraCast (not Chromecast) enables most Windows and Android devices to cast their screen. The resolution, of course, depends on the original screen. It could be convenient for casting movies from a Windows laptop or Android smartphone.

The setup menu is comprehensive so its good that an ‘Easy Setup’ appears the first time to set up Wi-Fi and basic settings.

I also like the Wi-Fi dual because so few people have Ethernet cables or the router close by. Wi-Fi streams well from our D-Link AC5300 router about 15 metres away.

The manual is here.

It is limited to upscaling from 1080p content. That is not an issue when playing Blu-ray, but you need to be aware that it may be an issue with older content. It does offer Auto1 (2K) and Auto2 (4K) upscaling. In either case, the result is excellent.

Like all brands of players, it works best with Bravia TVs/soundbars where the TV remote can control the player. Although it does support many other brands using the manufacturer code to train the player.

There is a palpable difference between streamed 4K content and the quality this device can produce.

My spies at JB Hi-Fi say the Netflix effect did have an impact on 4K HDR disk sales but its gradually coming back. For two reasons.

First, Mainly TV ‘short-form’ (very little of that is in 4K) is the most popular stream content.

4K movie ‘long-form’ content is often a less than satisfactory streaming experience even if you have 50Mbps NBN. 75% of the NBN connections are at lower than 4K streaming speeds leading to buffering and stuttering.

Sony’s both offerings are top drawer for Dolby Vision (a superset of HDR) and Dolby Atmos. Linked to a suitable TV and soundbar the experience is well beyond what 4K ‘compressed’ streaming offers.

But there is good growth in both the titles available and the sales. It is like the ‘good old days’ where people are going back to buying content they value.

Me. I would probably buy the UBP-X800 and never use the added features!

It is one of the very few that supports Dolby Atmos and Dolby Vision. Competitors include LG (GadgetGuy review here) and Panasonic.

My only caveat is that you need to look at a complete setup with TV and Soundbar. It makes sense to stick to the same brand unless you are just looking to add a 4K Blue-ray player.