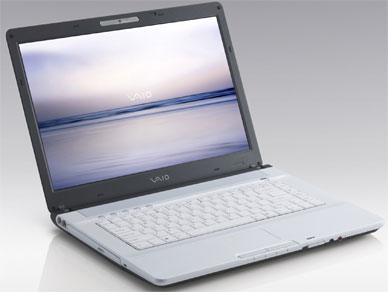 Sony’s range of Vaio notebooks has always been impressive. However, most of the more spectacular models appear at the ultra-portable end, where as footprints shrink, prices climb higher.

The FE-series is positioned toward the top of the home notebook range, and Sony considers the FE38GP a “prosumer” unit, no doubt thanks to its fairly impressive spec.

It has a cheerful design that’s not too dull and serious, which while not without its problems, serves this kind of machine well.

The FE38GP packs a 2GHz Core 2 Duo CPU, which is more than adequate for daily tasks. The graphics chip is from NVIDIA, using the latest mid-range model, the GeForce Go 7600. This is a very capable chip and is popular in desktop PCs in its PCI-Express card iteration. It won’t blow you away with its performance, but it can handle all but the most demanding of games with ease.

As a Centrino notebook. the FE38GP has all the features that this technology aims to standardise – wireless connectivity, Bluetooth, the usual number of USB ports. There’s no digital video output in the form of a DVI port, which is disappointing, since using the analog SVGA port with an LCD monitor does not give the best results.

Sony includes a shortcut on the desktop labeled “Prepared Your Vaio” which helps you configure a number of settings, and is very handy for people who are new to Windows XP.

Our review unit needed to install the Bluetooth device the first time we booted it, which could be a bit daunting for the uninitiated. It was a simple matter of letting Windows do everything automatically, though.

Wireless was switched on out of the box, but unlike Mac OSX, Windows XP isn’t too friendly when it comes to informing you when wireless networks are available. Once you click on the right icon though, connecting to wireless is fairly painless.

Thanks to the winning combination of CPU and graphics chip, the FE38GP performs very well indeed, at least when it comes to crunching numbers. It easily handles a wide variety of tasks, especially entertainment such as DVD viewing and games.

Less impressive is the battery life. Even Sony lists it as a mere 2.5 hours, which is frankly disappointing. If you intend to use this notebook as a movie player in the car, you’ll need to pick up a power adaptor you can plug into the cigarette lighter.

One other small issue is the catch for the lid. It’s not spring loaded, so sometimes you’ll close the lid and wonder why it doesn’t latch. Or you’ll try and open the lid and it won’t go. It’s a fiddle.

This is a cheerful and powerful machine, and one that’s not too expensive either. It’s a sensible combination of components that work well together, although the final results are solid rather than spectacular. The design is sensible, but there are a few quirks that could frustrate in day-to-day use. Perhaps this isn’t your next work machine, but it could serve as a good alternative to an ugly ATX tower at home.