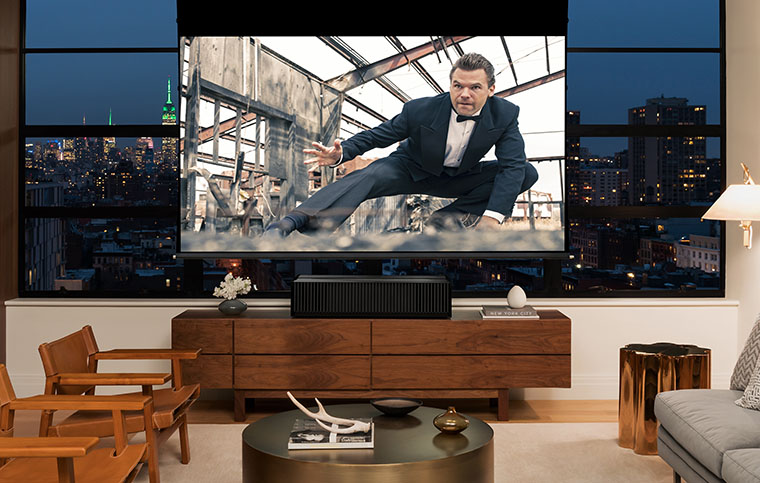 You’d think that the greatest advantages with the new Ultra High Definition video standards would come with home projection screens. The bigger the picture, the more important becomes high resolution. But so far there is only one large company in what might be called “true” UltraHD in Australia: Sony.*

Now Sony has added to its UltraHD line of projectors an ultra-short-throw model, the Sony VPL-VZ1000ES.

Ultra-short-throw projectors don’t much look like normal front projectors. That’s because they’re boxes designed to go very close to the screen, either below it or above it, and rather than just using a lens to focus a light across the room, they use a mirror and lenses to kind of pre-distort the image, and then reflect it up against the wall so that, in the end, the geometry and brightness comes out right.

Why? Well, you might not be able to do something like a ceiling installation – for example, if you’re in rental premises. Or your room might be such that people will be wondering across, blocking the light from the projector. Or it might be wider rather than longer, and not give enough range for a large picture.

So what do you get from the Sony VPL-VZ1000ES? It’s designed for screens from 80 to 120 inches (203cm to 305cm). To achieve those picture sizes it is placed between six and ten inches (15cm to 25cm) from the wall. Yes, that’s definitely ultra-short throw.

Although it’ll stick out into the room more than that because this is far from a tiny little thing. It measures 494mm deep, 219mm tall and 925mm wide. No, not small at all.

Sony says that it’ll produce a brightness of up to 2500 lumens. We’ve come a long way from the days when a home theatre projector was lucky to hit 700 or 800. Sony also says that it’s good for a dynamic contrast ratio of ∞:1. Which means that when the video in a movie or show fades away to black, the “lamp” in the projector will turn itself off. No light output means a zero at the bottom of the division. In practice, if there’s anything at all showing anywhere on the screen, the lamp can’t turn off.

Nonetheless, since the projector is based on Sony’s reflective SXRD panels – there are three of them in the unit – very good black levels should be achievable. The demo I saw in Sony’s Sydney office seemed to show very good black levels, but the lighting environment was far from ideal to I’ll reserve judgement for the moment.

The light source isn’t the usual lamp but a solid state device variously called  by Sony “Laser diode” and “Z-Phosphor Laser Light Source”. There aren’t really more details on it, apart from the life. Rather than the 2000 or 3000 or 4000 hours of lamp life you get from a conventional Ultra High Pressure bulb, this one’s good for 20,000 hours. Which means, in practice, the lamp will last beyond the useful life of the projector. You can watch three movies a day, every day for nine years, before you hit 20,000 hours.

Given the two names, I think it’s likely that the light source is one of the hybrid models in which the blue and red lights are generated directly by super bright LEDs, while the green light is created by using a power blue LED laser to excite some carefully chosen phosphors which glow the in shade of green that is desired.

The projector’s SXRD panels actually have a native resolution of 4096 by 2160 pixels, but the extra ones to the sides of the picture are just ignored when you’re playing UltraHD (3820 by 2160) material. It supports HDR10 – ten bit High Dynamic Range – content, which is the norm for UltraHD Blu-ray as well as a newer system called Hybrid Log-Gamma**. And it provides the appropriate HDCP (copy projection) standards required as well.

As I’m writing this up now, I see from the brochure something of surprise. Apparently the projector is supplied with a pair of 3D glasses. Which of course means that it supports 3D. Reading further, it uses RF sync, which means that that 3D glasses will work more reliably than the old IR sync method, which could often require the use of a special transmitter. That’s nice to know these days when 3D is being abandoned by TV makers left and right.

Even making allowances for the viewing conditions, I thought the picture was extremely impressive. Bright and colourful and with seemingly good black levels. Some material sourced from an UltraHD output PlayStation 4 slipped silkily smoothly across the screen at 60p. UltraHD live material looked just as good, with extreme detail. I was just a metre and a half from the 120 inch screen, and still the picture was extremely sharp and detailed, with no visible distortion at all.

* One other company does a very clever job of generating an UltraHD picture with a projector equipped with a less than UltraHD imaging device, but it can’t match the pixel-level precision of a projector with a full complement of UltraHD pixels.

** Hybrid Log-Gamma: the name described – ready now? – the mathematical transfer function used to map brightness to signal. In practice, it means that the signal can cope with an increased amount of dynamic range without increasing the amount of data. Some UltraHD Blu-ray discs may end up using it.