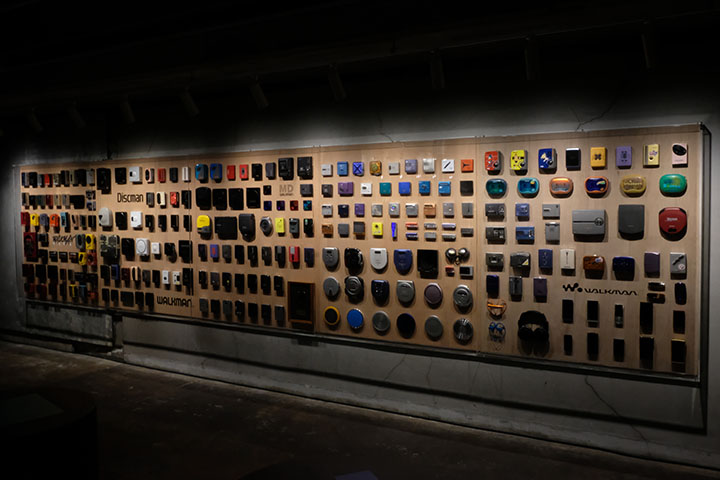 Last month marked the 40th anniversary of the Sony Walkman. We often talk about revolutionary products, and sometimes they really are. But there can be no doubt that the Walkman was one. As is often the case, Sony could have been easily beaten to the punch, but other companies “felt that no one would ever want to wear headphones in public for listening to music”.

I wonder if those company’s decision-makers are still around, and what they might make of a modern streetscape, in which over-ear and on-ear headphones, not to mention in-ears, are a significant feature. I would guess that the Walkman has multiplied the amount of music listened to by people by an order of magnitude this past four decades. Not just because everyone was listening to a Walkman, but because it broke the personal stereo ice for other manufacturers. And, of course, the Walkman paved the way for the Apple iPod.

The first Walkman was big

Relatively speaking, that is. I’d forgotten, but in June I spent a little time in Tokyo as a guest of Sony. Amongst the activities was a visit to Ginza Sony Park. Ginza is the high-class shopping district in Tokyo. The Sony Park isn’t quite what the second half of the name would suggest. There isn’t much in the way of grass, although there is a little greenery. It is a corner block formerly occupied by a now-demolished building. Sony has converted the basement levels into a multistory, multipurpose museum.

At the moment, Ginza Sony Park is celebrating the Walkman. It will run until 1 September 2019. The exhibition has many dozens of Walkmans (no, no, no, not “Walkmen”!) on display, all the way back to the original one. The Sony Walkman TPS-L2 was 134mm tall, 88mm wide and 29mm thick, and tended to pull at one’s pocket, since it weighed 390 grams. As the years accumulated, the thing shrunk until some models were only slightly larger than the cassette tapes which the Walkmans played.

Was the Walkman High fidelity?

It had a pair of headphone outputs, and a weird arrangement by which you could press a button on the top and speak into a built-in microphone. The sound would be mixed into the audio so that both listeners could hear it. Or perhaps it replaced the music. I’m not sure. Silly idea perhaps? Hey, if you’re designing the first product in a totally new class, what features would you put in?

Anyway, the rated frequency response was 40 to 12,000 hertz and the power output was 15 milliwatts at 10% total harmonic distortion into 35 ohm headphones. High fidelity? Not by today’s  standards. But, then, even the very best cassette tapes were not high fidelity by today’s standards. Some could deliver hi-fi frequency responses, but the best still had noise levels at around -60dB (compare: CD is -90dB+).

If you have a half-hour to spare, do watch this video. It’s an entertaining 2015 teardown of the original TPS-L2 Walkman by Australia’s own Dave Jones, design engineer and proprietor of the very popular EEV Blog.

The first of many, many Walkmans

There were many dozens of Walkmans following the TPS-L2. Indeed, as you can see from the video above, the TPS-L2 was two, perhaps three distinct models. There were circuit revisions and the early models lacked the “Walkman” branding on the front. At Sony’s Ginza display there was a “Walkman Wall”, a massive display (see picture at top) of many dozens of Walkmans in more or less chronological order, all the way up to recent solid-state digital models.

The display also had quite a few working models with tapes inside. I could pop on headphones and play music from the relevant period.

Eventually the compact audio cassette faded away, and for a time Sony switched to “Discman” for a while for its portable CD players, but soon reverted to “Walkman”. Portable CD players presented interesting design issues because the CD is a non-contact medium. The read head hovers above the track, and the tracks on a CD are only 1.6 one thousandths of a millimetre apart. The slightest bump and the head loses its position.

That was eventually resolved by incorporating a buffer and having the unit try to read ahead. The buffer contents were supposed to carry the play over read interruptions. It usually worked quite well. That was followed by the MiniDisc, a Sony invention. The MiniDisc was a hybrid magnetic/optical digital medium, but that never really took off. What did take off were hard-disk players, such as the iPod. And finally, solid state memory players took over. The final audio cassette Walkman was discontinued in October 2010.

Of course, we’ve reviewed and reported on various Walkmans over the years.

The Sony Walkman without a doubt created the personal stereo audio industry. But it was anticipated by seven years by a German-Brazillian named Andreas Pavel. He first tested his – seemingly unwieldy – “stereobelt” in 1972. Apparently he offered to sell the idea to several consumer electronics companies, including Yamaha and sometime Sony collaborator Philips. Those several companies didn’t think it was a goer.

Nonetheless, Pavel did take out patents in a number of territories. Sony ended up embroiled in several lawsuits regarding patent infringement. Pavel lost at least one, while others were settled by Sony.

So, undoubtedly, Pavel came up with an idea first. But it was Sony that made a commercially viable product, and Sony was the company that took the entrepreneurial risk of releasing the Walkman, even though most seemed to think that no one would want to wear headphones on the street.

And with the Walkman, Sony changed the world, allowing people to listen to their music nearly everywhere.