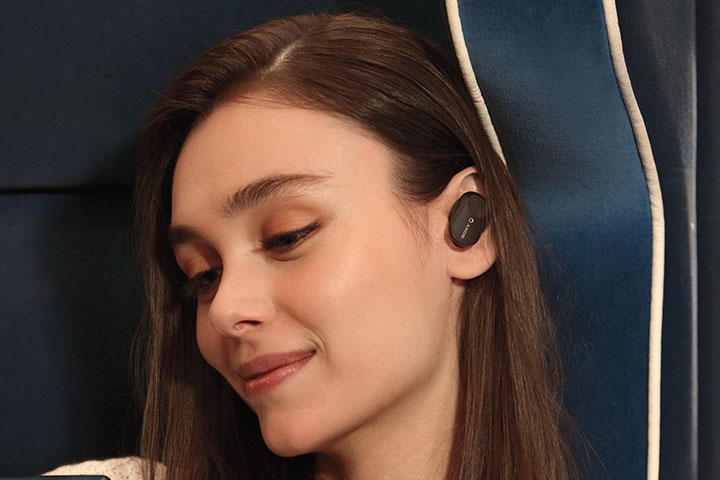 Our managing editor totally loves Sony’s premium 1000XM3 series of eargear (see here for the headphones and here for the earbuds). Now Sony is adding a true wireless entry to the category, the WF-1000XM3 earphones.

Sony calls them headphones for some reason. But they are true wireless buds, conforming to the norm for these kinds of things: two light-weight buds with a charge and carry case. But they incorporate active noise cancellation, apparently on a par with the first class Sony WH-1000XM3 Wireless Noise Cancelling Headphones, which we reckon are class-leading. Those headphones incorporate Sony’s QN1 noise cancelling processor. The new Sony WF-1000XM3 buds use the QN1e and “Dual Noise Sensor Technology” to deliver, says Sony, “exceptional noise cancelling performance, enabling you to hear the music and nothing else”.

I expect to be able to bring you more information about Sony’s approach to noise cancellation after a briefing in a couple of weeks. The subject is fascinating, but conceptually quite simple. How well it works depends on the implementation. (Some just don’t work at all.) Generally, they work best in the midrange. Sony seems very confident about the WF-1000XM3 buds, noting that the processor:

not only cancels more noise across almost all frequencies but also uses less power. Anything ranging from annoying aircraft cabin noise, to hustle and bustle on the city streets, is dramatically cancelled by the buds – so it’s all about the music.

Passive in addition to active

Passive noise isolation always helps with buds. The Sony WF-1000XM3 buds come with seven sets of tips – four different sizes in silicon and three in memory foam. Touch sensitive controls on the buds provide for a light touch in running things. A “Quick Attention” mode mutes the sound and passes through whatever’s happening around you when you touch one of the earbuds.

The earbuds also automatically issue a “pause” command to your phone’s music player whenever you take one from your ear and resumes playback when you put it back in.

They are designed for a long, long life. Sony says that each charge of the buds will run them for up to six hours, and that’s with noise cancellation switched on. Without noise cancellation, that pushes out to eight hours. And the charge case can recharge the buds three times. So that gives you from 24 to 32 hours of use before you need to find a USB power source. Sony says that placing the WF-1000XM3 buds into their case for ten minutes will give them 90 minutes of playback time. The case uses a USB Type-C connection for charging.

Sony rates the frequency response of the WF-1000XM3 earphones at 20-20,000 hertz. The codecs supported are the standard stereo one for Bluetooth – SBC – plus the iPhone-friendly AAC. Apparently aptX and Sony’s own LDAC aren’t supported. They can be controlled by the Sony Connect app. That includes customisation for things like user controls and noise cancellation. The Sony WF-1000XM3 earbuds also support Google Assistant.

The case itself – and the earbuds too – certainly look far more stylish than most. They will be available in black or platinum silver.

They are available this month – apparently right now on Sony’s website – for $399.95. Sony’s website on the WF-1000XM3 earbuds is here. Expect more from us on them over the next couple of weeks, including a full review.