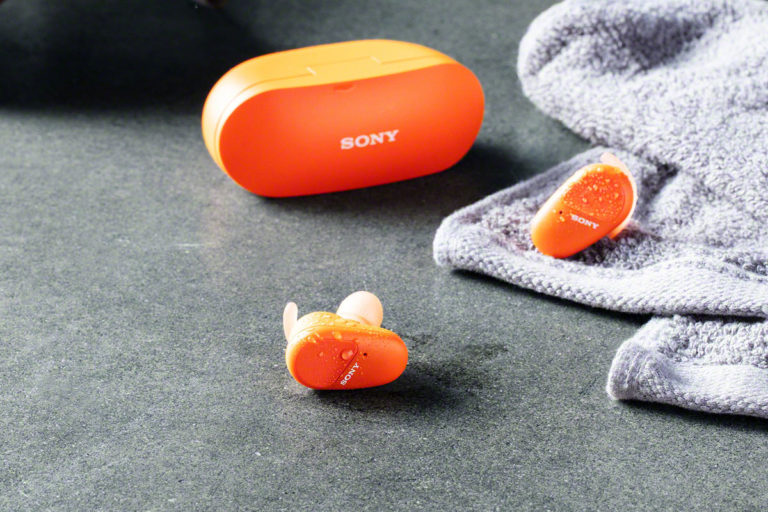 The SP in the model number of the Sony WF-SP800N earphones is for “sport”. These are from Sony’s active line, and come with an exceptional nine-hour battery life. Let’s check them out.

Sony’s newish – hey, I only received the review units a couple of weeks ago, even though they’ve been out for months – true wireless sports earphones feature active noise cancellation and 360 Reality Audio. Because they’re sports models, they have little wings to help lock them securely into your ears, and they also have an IP55 rating, which means they’re safe against a bit of rain and sweat.

The Sony WF-SP800N earphones are available in four colours which you can see from the pictures on this page. They use 6mm dynamic drivers with Neodymium magnets. Sony rates their music playback time at 9 hours with noise cancellation on. That’s a remarkably long life, presumably enabled by the use of larger batteries. These earphones are relatively large and heavy. Sony says 9.8 grams each, but I weighed them at 9.6 grams each, and that’s with the largest of the four sizes of silicone tips attached.

Note, that 9 hours is with noise cancellation. Without, Sony says 13 hours. And the “continuous communication time” – phone conversations and such – is 7 hours with ANC, 8 hours without. The charge case has just one refill. Which is a little surprising since the norm is two full recharges. The case charges via USB Type-C, as it should. It’s a little on the bulky side at 85mm long by 52mm tall and 34mm thick. It weighs 77.3 grams with the buds, 58.2 grams without.

Listening with the Sony WF-SP800N earphones

Sony has done a nice job balancing up the sound of the Sony WF-SP800N earphones. There’s a five-band EQ slider in the Sony Headphone Connect app, but for normal listening I felt no need to use it. There’s also a “Clear Bass” slider. This is basically a bass level control. I found a fair bit of music benefited from having this pushed up to around +5. Despite the boost, the earphones maintained their control and composure.

For example, right now I’m listening to the 1974 UFO album Phenomenon. With that bass up a bit, the whole rhythm section is considerably more compelling. The cymbals are clear and well-located on “Built for Comfort”, but not excessively bright. The voice is natural, not harsh. I’m enjoying these earphones a great deal.

For Harry Styles’ Fine Line I returned the Clear Bass slider back to the centre position. Modern recordings like this have plenty of bass without artificial assistance. Sometimes I find myself merely tolerating true wireless earbuds with music … better than nothing, but I’m having to overlook many defects. Not these ones. They are highly listenable.

One feature of the Sony WF-SP800N earphones is something called 360 Reality Audio. I wasn’t familiar with this. It turns out not to be an in-phones process, but some kind of encode/decode system that works with a limited range of music offered by some music services. Those supporting it are TIDAL, 360 by Deezer, Artist Connection and nugs.net. I use TIDAL so I stuck with that.

In order to use it you have to optimize the system for you. It apparently uses some model of how real world audio sounds to you as an individual based on the shape of your ears. So optimisation involves taking photos of your ears which are sent off to Sony’s servers. They calculate whatever needs to be calculated and send the information to TIDAL, which then processes the 360 Reality Audio tracks as it streams them. I just searched for 360 Reality Audio in TIDAL and came up with a bunch of tracks. As I’m typing right now, the earphones are playing a live Elvis Presley concert. I’m not a huge Presley fan, but it’s sounding quite decent. Or it did once I tweaked the EQ in the Sony Connect app – dragging down the 2.5kHz band by a few decibels and pushing the bass slider most of the way to the right.

The 360 Reality Audio doesn’t do any kind of weird surround sound. It just adds a respectable degree of spaciousness to the sound. Switching to Blue Oyster Cult, I comparied the 360 version of the track “Subhuman” to the regular version. It reduced bass output, added a peaky midrange – that’s why I had to use the EQ – and limited the maximum volume.

The range and connection reliability was excellent. On my standard walkaway test, there was perfect reception regardless of head orientation out to 25 metres. It seemed to be the left earbud that maintained the connection to the phone, so I was able to go out to forty metres so long as that bud had line-of-sight to my phone.

My phone used the AAC connection (only AAC and SBC are supported by the Sony WF-SP800N earphones). The Sony Headphone Connect app reports which connection you’re using, as well as the charge level of the buds. And, unusually, the charge level of the case. Of course, the case isn’t connected via Bluetooth. It tells the buds its level when they’re charging and then they report it to the phone when they connect.

I found the fit good with the largest silicone tips, and they remained securely locked in despite some pretty vigorous head-shaking.

The touch controls were pretty reliable. They don’t take much of a tap and respond with a quiet ding, so you know your taps have registered. You can’t adjust volume from the buds, but there’s a volume slider in the app. This works independently of the phone’s volume level control. I found it best to max out the app’s slider and then control things with the phone’s volume buttons as required.

So, these earphones have active noise cancellation. Yes, it works … a little. It took a slight edge off my aircraft test noise. But it wasn’t a patch on much other Sony noise cancelling gear. Frankly, I was disappointed, given that Sony is probably the best in the business at noise cancellation.

The earphones also offer an ambient mode. A tap on the left bud cycles through ANC, off and ambient. An adaptive mode tries to work out which is appropriate and switches accordingly, learning as it goes. This worked fairly well, but I switched it off because whenever it changed, it partially muted the left earbud to sound a quiet chime to let you know it had done something. Which was frankly irritating when you’re trying to listen to something.

I can’t see myself seeking out too much 360 Reality Audio content. It generally sounded better to me in its vanilla form. But, hey, I’m bit of a purist when it comes to sound. Or maybe a sound processing model based on a 2-D image of your ears simply isn’t going to be that good a match to reality. Still, you may prefer it. Just remember, it will only work with a limited amount of prepared content, and you will need TIDAL or one of the other listed services to use it.

But it doesn’t matter, really. Because in regular mode the Sony WF-SP800N earphones are really rather fine sounding. And at the current price of around $250, they’re also very good value for money.