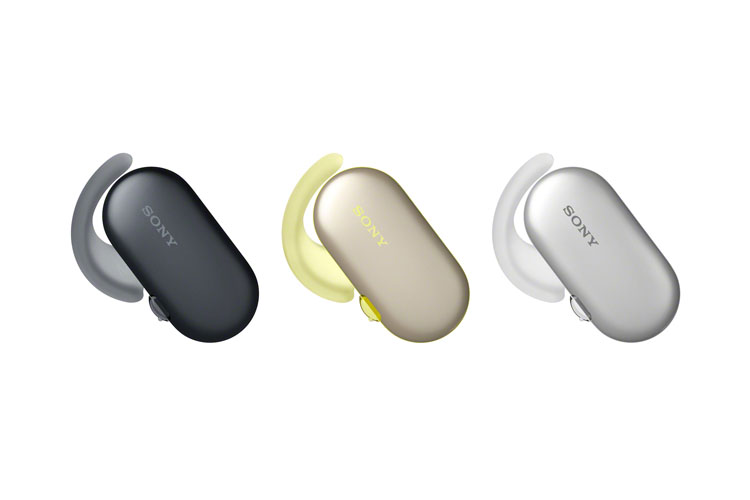 For the most part sports earphones are useless for swimmers. Sure, they’re typically sweatproof. But can they cope with full immersion? And that’s just the start of the problems. Which brings me to the Sony WF-SP900 wireless sports earphones. They solve those problems.

First, they deal with that issue of coping with water. The Sony WF-SP900 wireless sports earphones are IPX5/8 rated. The 5 and 8 are two different ratings of waterproofness. Wikipedia says that IPX5 means that they can cope with “Water projected by a nozzle (6.3 mm)

So, you can swim without damaging them. What was the other main problem with earbuds and swimming? Bluetooth. Bluetooth signals just don’t go through water at all well. There’s no chance of leaving your phone at one end of the pool and listening to its contents. The Sony WF-SP900 earphones deal with this by having their own 4GB of memory built in, along with a player. You can load them up with tunes and don’t need the phone at all.

The Sony WF-SP900 earphones come with eight sets of tips. There are four different sizes, with each size in a version designed for use in water, and a version for dry land. The former differ from the latter only by colour-coding and the thin silicon membrane over their openings. This stops water from getting into the tiny balance armature drivers within the buds. But it also interferes with the sound coming out.

They also come with three sizes of fins or wings which help clip the earphones securely into the whorls of one’s ears. I found that the largest size tips provided an excellent fit for me, sealing in the bass. The fins really did secure them well. I wouldn’t risk diving into the water with them in place, but there was no sense of insecurity with them in my ears while swimming.

Unlike Sony’s other two “truly wireless” earphones, these ones don’t purport to provide noise cancelling. No loss, given that the noise cancellation in the Sony Sports WF-SP700N buds did nothing, as far as I could tell.

The earbuds weigh 7.3 grams each. They are rated at up to 3 hours Bluetooth playback of music from your phone, or six hours from their internal memory. They come with a case which can charge them three more times. This also acts as a docking station when it’s connected to a computer, so you can load them up with content. The socket for charging and computer connections is USB Type-C rather than Micro-B USB. Thankfully.

You can pair in the regular way or using NFC. The AAC and SBC codecs are supported for Bluetooth. SBC is the default. To use AAC you will need to change a setting in the Sony Headphone app on your phone (assuming your phone supports AAC).

The internal music player supports a surprising number of formats. There’s MP3, WMA and AAC. Almost everyone will use those pretty much exclusively. Then there’s also FLAC, albeit limited to 16 bits and up to 48kHz sampling. And CD-standard WAV. I did not bother putting any of those last two on. They consume a lot more space. With only 4GB, MP3 and similar seemed like the best thing.

You load up music onto the earphones simply by putting them in their case and plugging it into your computer. They look to your computer just like removable USB storage. Then you drag and drop music from your computer to the Music folder on that storage. Sony is happy for you to do it that way, or for you to use the Sony Music Center for PC software. I wasn’t going to bother too much with that until I noticed that the Sony software provided the ability to use playlists. Since you have little control on what tracks are playing back, the possibility of using a playlist was attractive. At least, I figured, I’d be able to put tracks in the order I prefer.

The first thing that Music Center for PC did was notice that the buds needed a firmware update. This proved to be a 45MB download. A minute or two later, the buds were updated to the latest. The software also revealed (this is also easily seen in Windows Explorer) that there was a 3.3GB of space available for my music. There were already four songs in 256kbps MP3 format in the memory. They amounted to a fifteen-minute playing time.

Anyway, I created a playlist in the Music Center with tracks in a particular order, then copied it in using the Music Center software. Unfortunately, it seems that the playlist is only used to tell the software which tracks to transfer. The playlist file was itself transferred to the Sony WF-SP900 memory, but it didn’t seem to control playback.

I’d criticise this, except it would be unfair. The earbuds necessarily have few controls and they are already heavily used with multiple taps and presses for different functions. There simply must be limitations on control. You can skip tracks forwards and backwards (double and triple tap the right-hand control button). Or pause and resume (single tap on that control). You can adjust volume up and down (double tap on right and left buds, respectively). And that’s it.

When you resume playback after the buds have been in their charging case, the sound continues from where you left off. So, if you load up the earphones with a dozen hours of music, you’ll just gradually work your way through it. When they get to the end of the contents, they just go back to the start and begin again.

You can take advantage of this to load up the earbuds with an audiobook or podcasts if you’re comfortable locating their files on your phone or computer so you can copy them to the Sony WF-SP900 earphones. Whatever you’re planning to listen to, take a few moments to consider their order. If you like listening to albums in track order, then make sure the file names have track numbers at the start.

To check load speed, I grabbed 500+ MP3 tracks amounting to a touch over 2GB and dragged them to the Sony WF-SP900 earphones (in their charge case). Windows initially reported a copy speed of a bit over 6Mbps, but about three quarters of the way through the speed stepped down to around half that. Altogether, it took six minutes and thirty seconds for the transfer. Not superfast, but not so slow as to make one reluctant to replace the music from time to time.

I was not an enthusiast for the sound of the Sony WF-SP900 earphones in their natural state. They were a bit tinny, with a distant bass. I found them fine for podcasts, with good clear voices, easy to understand. But music? Not so good.

But, happily, the Sony Headphone app on my phone came to the rescue. It has EQ functions plus something called Clear Bass. There are only five EQ sliders, with the deepest one centred on a relatively high 400 hertz, which isn’t really bass at all. But I found by putting that one at the maximum setting, pulling down the three middle sliders a little, and setting Clear Bass to the maximum (it’s sounds like it’s a bass boost control), the Sony WF-SP900 earphones were able to deliver listenable, enjoyable music.

The deep bass was still quite recessed. But for the first time I heard the bass drone (in the distance) of one of the tracks provided on the earphones. I copied the track to my computer for a listen on my own well-balanced system, and that bass line was much louder. Still, the deeper notes (which were at 41 hertz) were now audible through the earphones, instead of being not previously noticing their existence.

For out-and-about wear, the music sound was good. But you can expect a reduced battery life with the bass being turned up so high.

All that was with the land-based earbud tips. The ones suitable for in-water use were a different matter. They quietened the sound by a marked degree – I’d guess it at 6dB, perhaps more. They also killed the treble.

Within the Headphone app you can set up a Quick Sound Settings function. This gathers Ambient Sound Control and EQ under the one setting, and this can be switched on and off using one of the earphone control buttons. I found that having a flat EQ when using the swimming tips helped clarity and gave a so-so sound. It was okay for voice. I’d be inclined to do my swimming with podcasts, rather than music. With the swim tips in place, there wasn’t really a setting that didn’t have at least something of the feel of listening via two tin cans connected by string.

With the Sony WF-SP900 earphones, swimmers now have a means of occupying their minds while they’re pounding out the laps in the pool. All I can say is, well done.

Sony’s website for the Sony WF-SP900 earphones is here.