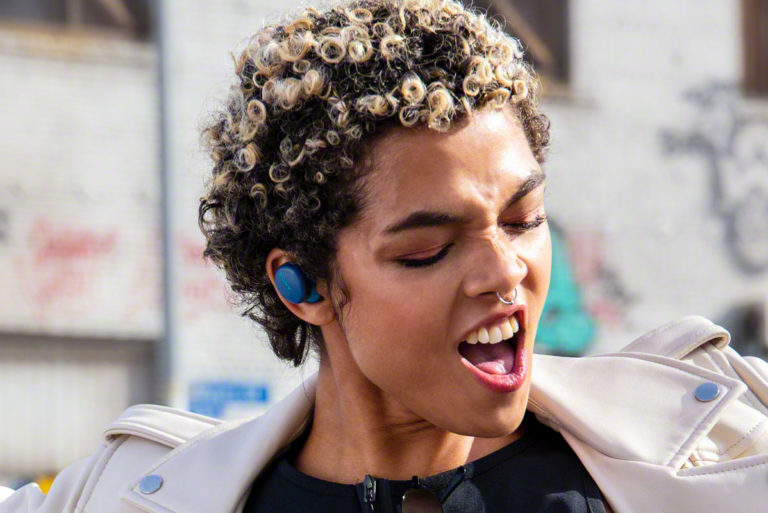 The Sony WF-XB700 true wireless earphones are the Japanese consumer electronics giant’s take on a no-nonsense, no-frills set of earbuds. So, are they worth their relatively modest price?

No noise cancellation. No particularly fancy codecs (there is AAC, to please iPhone users). No ambient sound. No auto-pause on taking them from one’s ears. The Sony WF-XB700 True Wireless Earphones are kind of basic.

So let’s see what you do get with the Sony WF-XB700 earphones. You know the drill: two earbuds, silicone tips in four sizes, a combination charge and storage case. The runtime of the earbuds for listening to music is rated at an impressive nine hours. The case can add another nine hours. There’s a control button on each bud. It’s a tiny little thing on each side, on the edge of the bud. You pinch from side-to-side on the bud when actuating the button, rather than pushing it into your ear. That can make for a more comfortable wearing experience.

Inside each bud is a driver that’s, well, kind of huge. It’s common for true wireless earphones to use 5mm, 6mm, perhaps 7mm drivers. The Sony WF-XB700 True Wireless Earphones go for 12mm drivers. That’s just shy of half an inch. Of course the channel from the front of the driver into the ears is smaller than that, but this little divergence from the norm was intriguing. We’ll see later if and how that translates into the quality of the sound.

The buds themselves are not the smallest in the genre, but they remain reasonably light at 7.7 grams each (Sony says 8 grams). The case is also quite light. With the buds, the whole package weighs 61.2 grams. The case is quite compact at 81mm long, 38mm tall and 43mm deep. The lid is spring-loaded and translucent so that you can see the LED indicators on the buds through it. The buds are drawn in magnetically for reliable charging. The charge case has a USB Type-C connector on the back for charging.

The Sony WF-XB700 earphones allow quite a bit of control, given that they only have one button on each. Press the left one once and the volume increases by a notch. Press and hold it and the volume reduces. The button on the right one is for play/pause and track skipping. When a call comes, any button will do the job of virtually picking up the receiver.

The Sony WF-XB700 earphones seem to be ready for activity since they’re IPx4 compatible. That should protect them from sweat, or long runs in the rain.

The Sony WF-XB700 True Wireless Earphones score Sony’s Extra Bass designation. That name has me cringing a little, because while I like bass – even a little too much, at times, so long as it’s clean and controlled – I don’t like it overdone. Does “Extra Bass” mean more than what’s in the signal?

Happily, in the case of the Sony WF-XB700 True Wireless Earphones it means “balanced bass”. As I’m writing these sentences, I’m listening to the Steven Wilson remix of Jethro Tull’s Thick as a Brick, dating from some 48 years ago (the original, not the remix). I’d been running the earphones in all day on boring old podcasts before getting to any music listening. Roughly aware of the price, I’d kind of resigned myself to writing sentences based around such words as “inoffensive”, “adequate”, “pleasant”. Hopefully. Things could have been worse.

And I was wrong in my resignation. The sound produced by the Sony WF-XB700 true wireless earphones was actually pretty damned good, occasionally straying into startlingly good. First, the upper midrange and lower treble were controlled, so that there was virtually no harshness, nor emphasis of vocal sibilance in any of the audio. The Thick as a Brick cymbals were mostly quite full, impressive and nicely focussed. The midrange was surprisingly detailed, and nicely present. There wasn’t the closed-in feeling of a lot of cheap stuff, but the open expansive delivery that can lift music above the mundane.

And that “Extra Bass”? Actually, the kick drum was presented as a nice clean thump. At that listening, I was thinking more of “Right Bass”.

Okay, well, let’s go searching for some music that may not be delivered quite so well.

That stuff is pretty old. So how about something from 2020? “Give You One” from Australian performer Aphir’s album Republic of Paradise kind of surprised me. Yes, there was a slight emphasis in the upper midrange, but not much. And the deep and resonant percussion came through with considerable candour.

When I really want to stress-test bass I go to Michael Murray. He was the guy fingering the Great Organ at Methuen back in 1979, playing Bach’s Passacaglia and Fugue in D-minor, a piece Leopold Stokowski (the conductor of Disney’s Fantasia) called the most “sublime” piece of music ever written. I fell in love with this music as a pre-teen and ended up buying six versions of it before finally coming on the Murray one. It’s the first that delivered the bass properly. That great organ hits the final “C” in several of the phrases, on the lowest pedal, with a fundamental frequency of 16 hertz.

I don’t think that the Sony WF-XB700 earphones delivers that 16 hertz in any substantial way, but they clearly delivered the 32 hertz second harmonic (this tends to dominate anyway) with authority.

Those are just a couple of examples, representing what these earphones deliver.

And now for something a little ridiculous. Ridiculously good, that is. I’ve just returned to my computer after stepping outside for a few minutes. Outside, I’d placed my phone on the rock I always use in my front yard, and presumably bemuse my neighbours as I walk away from the phone listening to something on the earphones, turning my head this way and that. The aim: to see how far I can get without any signal dropouts, regardless of the direction in which my head is turned. By way of comparison, most true wireless earphones can manage at least ten metres. Some particularly impressive ones can reach as far as 25 metres.

For the Sony WF-XB700 earphones, the range was a gobsmacking 85 metres. Wow.

What could explain this? Well, I did do the test at 10:30 on a Friday night, rather than during the day. Could that have made a difference? Perhaps. In practice, I found the solidity of the connection between phone and phones essentially perfect, regardless of where the phone was on my body.

Fact is, I’m very happy to listen to real music on the Sony WF-XB700 earphones. I don’t mistake them for the highest of high fidelity, but they’re looking in that general direction. And that’s almost unknown at this price point.