Sony XB501G speaks OK Google and lights up your life 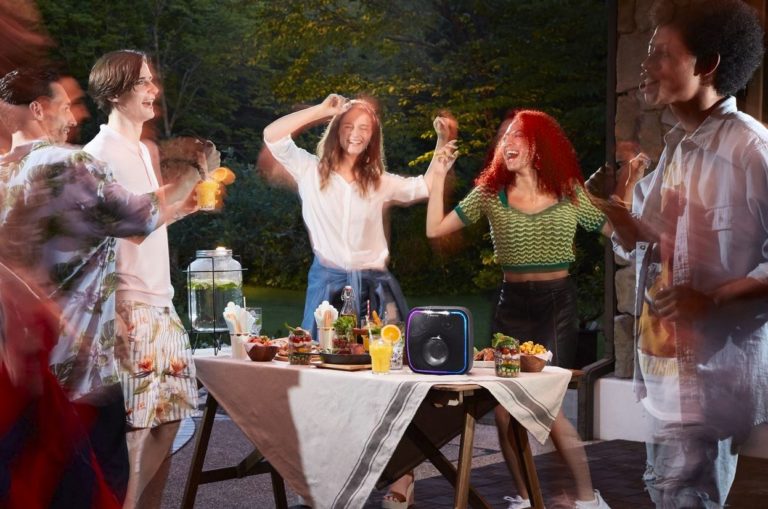 We christen the XB501G the Sherman tank of Google Assistant speakers. Not because it is built like one (it is) but because it makes enough sound to scare anyone on the battlefield.

, the 2.1 channel XB501G has Sony’s Extra Bass, LED party lights, Bluetooth 4.2, IP65 rated, 16-hour battery, USB-C PD and adapter charge, Chromecast and Google Assistant. In my books that makes it the most versatile smart speaker on the planet.

We took the 2.72kg Sherman tank for a test drive, and it is the victor in the water-resistant Google Assistant race. It just edges out the JBL Link 300 as my favourite big bass speaker.

Beauty is in the eye of the beholder. This is very ‘tradie’ like – functional, big and bold. Teenagers would love it – no faux woodgrain in sight.

It is big, squat, lights up, has a carry handle and a tripod mount. What more could you want?

You first must set this up via Google Home before you try Bluetooth/NFC. It should have been easy – and it was.

But as it the case with early review units – it needed firmware updates, and that took a few goes to get right. And it supports 2.4 and 5Ghz Wi-Fi and did not like the smart band aggregation of our reference D-Link AC5300 router (so we turned that off and separated the channels). We still had issues, so we turned off mobile data (probably the culprit), and it all worked.

Then to prove a point we removed the speaker from Google Home, put the router back to aggregated bands and reset the speaker. Voila – it installed perfectly as it should. This is not really Sony or Google’s fault – as we have learned this trick over many smart devices.

Once you set up Google Assistant, then you can nominate music and video streaming services and set it up as part of a multi-speaker/room Chromecast. Then, and only then can you connect it as a Bluetooth speaker.

Let’s get right into the sound

It is 2.1 meaning stereo. It has 2 x 45mm satellite speakers angled to provide a left/right sound stage and reasonable separation – more so with the Live sound digital signal processor (DSP) feature on. We are divided if Live is best – some like bass and some like separation. I guess it depends on the room or outdoors placement.

It takes sound over Wi-Fi or via Bluetooth with SBC and AAC codecs. The Samsung Note9 has Sony LDAC output as well, and the app recognises that as the default.

Being big means, you can have a big 125mm sub-woofer and some resonance from the air volume inside the case – most Google Assistant speakers, only have passive radiators. This means bass kicks in from around 50Hz, and it is strong, fulsome even right up to high-mids and low treble. Sony has nailed warm and sweet for music here.

And if you don’t need the bass, you can adjust turn it off (in the app or via a push button) which gives it more of a mid-centric sound signature that is great for vocals and clear voice.

We repeated the tests over BT (from a BT 5.0 device to the BT 4.2 speaker). SBC slightly lessened the upper-mids and treble, and AAC bought that back. LDAC was superb – thanks Sony.

The app allows you to select ClearAudio+, and that is what we prefer. Sony says it is a special sound mode that detects the music track that the user is currently playing, then selects the best sound field to deliver the best possible sound listening experience. You may hear a different sound effect whenever a track with a different audio format is played”.

But you can also set Extra Bass, Live sound or standard, or play with a +/-6Db EQ. As far we can tell these modes are for both Wi-Fi and Bluetooth and you can also play with the Google Home EQ as well.

In other words, the speakers allow you to create (within +/-6Db limits) whatever sound you prefer. If you know what you are doing that is fine – if not do not complain.

The speaker stores the setup, so it remembers them after power-down/up.

The only issue I have with the app is that it only supports YouTube or Google Play music. Spotify comes via its own app or Google Assistant.

RBG LEDs go around the speaker; there is a speaker light and a flashing strobe. These can move with the music and are surprisingly astute at matching colours with the pace and style of music.

Light patterns are rave, chill, hot, cool, strobe, random flash and off. Chill is my preference.

IP 65 means 6 – no ingress of dust – complete protection against contact (dust-tight). The 5 means Water projected by a nozzle (6.3 mm) against enclosure from any direction shall have no harmful effects. In short, you can take it most places (snow, worksites, beach etc.) and the environment won’t hurt it. Rain for up to 15 minutes won’t kill it either but don’t take it swimming as you need IP68 for that.

Build quality is excellent – it’s a Sony – and it looks as if it can stand rough and tumble in the back of a ute. There is no information on drop height – keep it to under a metre, and you should be fine.

Frankly, we could not test that properly but know Sony well enough that it is not telling porkies. On a two-hour, 50% volume test with Extra Bass and Lights it used 15% – pass.

Interestingly you can charge either from the barrel plug adaptor (not water-resistant) or use your own USB-C PD charger with at least 15W, and up to 65W so you can use with a USB-C PD compatible power banks – that’s great.

It has two far-field mics that are completely ineffective at high volume – as all Google Assistant speakers are. We tested at 50% volume (60dB), and Google Assistant responded well to about 4 metres away.

As a party speaker, it’s perfect. Loud, lights, good sound and an impressive sound stage that will fill an urban backyard. Extra bass does not mean bone-shaking bass – you need a real sub-woofer for that, but it does mean bass where few portable speakers dare to go.

As a home speaker, you probably could get better stereo sound from a pair of Google Home Max speakers. Unfortunately, this speaker doesn’t support True Wireless Stereo (although that tech only works over Bluetooth) and Chromecast doesn’t support stereo.

Google Assistant is useful but remembers you need to be in Wi-Fi range or tethered to your smartphone as a Wi-Fi hotspot.