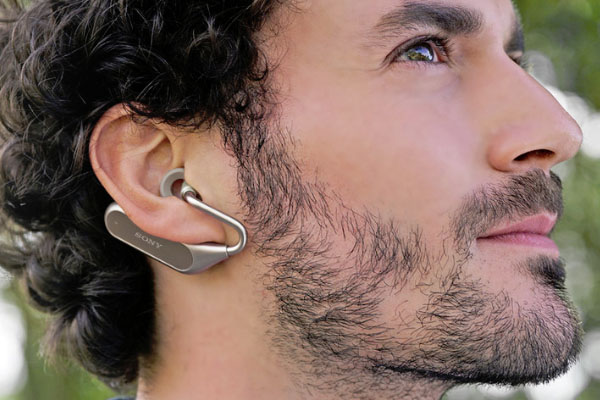 Sometimes a device which goes completely against expectations crosses our review desk. One such: the Sony Xperia Ear Duo earphones.

My expectations were that the Sony Xperia Ear Duo was just one more set of wireless earbuds. They are earbuds, kind of. They use Bluetooth to communicate with your smartphone – both iOS and Android. And they come in a disc-shaped case that’s 25mm thick and 89mm in diameter.

The case not just holds them but charges them. It carries enough charge to refill them three times. The earpieces snap into position with certainty, pulled by magnets. You charge the case via a USB Type-C socket. As usual, it’s up to the purchaser to provide the power supply. Also provided is a USB Type-C charge cable.

So, I figured I’d plug them into my ears and start listening. But I opened the case and found a rather more complicated story. First, instead of diminutive buds, they were relatively substantial devices. They each consist of a largely rectangular block with a bent tube emerging from its end. At the end of each tube was a ring of silicon, not the usual closed ear tip. Each block measures around 50mm long by 17mm wide and 10mm thick. Each earpiece weighs 10.6 grams.

There were no apparent controls on the rectangular block. Putting them on my ears looked daunting. As we’ll see, I did master that later.

I went to Sony’s website and looked under earphones to findout more about the Sony Xperia Ear Duo. And I couldn’t find it. But then Irealised that there are two brands mentioned in that name: Sony and Xperia. Ifound them on the Sony Mobile website, which is where all the Xperia products are located.

It was then that I approached some semblance of understanding. Most earphones I review are principally for listening to music. And most of them also have a hands-free function. But the Sony Xperia Ear Duo are principally supercharged hands-free devices, with which you can also listen to music and such. They are suitable for wearing for extended periods and generally not interfere with your life and work while you’re wearing them. That silicon ring performs the function of locating the tiny sound transducers over your ear canals.

Actually, the real mini-drivers are inside the block. The tube is called a “spatial acoustic conductor”. It seems that this “pipes” the sound into your ears. The sound of the outside world passes through the hole at the centre of each ring. You can live life normally, except with the body of the Sony Xperia Ear Duo earphones tucked behind each ear.

Spare locating rings are included. One was larger than those pre-installed. One was smaller. Weirdly, there was only one of each, and both were in a tiny plastic bag labelled “L”, for what I imagine means “Large”.

I said that the Sony Xperia Ear Duo earphone are “supercharged hands-free devices”. That’s because, in addition to allowing you to manage calls, they work in conjunction with the Sony Xperia Ear Duo app to do much, much more. I used the Android version. They work with both Google Assistant on Android devices and Siri on iOS devices. But the “Daily Assist” function works only with Android.

Daily Assist does things like tell you the time each hour, warns you of forthcoming appointments and reads out texts and emails. When you install the app and get it going, be prepared to grant quite a few permissions so it can read your calendar, contacts, email and many other things. It also read my WhatsApp messages, I discovered. I’d guess it would work with any other text-based communications app that you might have.

Of course, it isn’t always very smart. When emails came in it would read them out to me, including the disclaimers at the foot of some of them, contact phone numbers and so on.

The app/hardware combination is highly configurable. There are controls on the Sony Xperia Ear Duo earpieces: the surface is touch sensitive. Slide your finger on one for volume control. Tap it to play or pause playback or answer calls. A tap also stops the earphones from reading those interminable emails.

The right earpiece can be configured to respond to different taps and holds to do things like invoking “Daily Assist”, reply to a message, warn of upcoming events or simply to announce the current time.

Furthermore, you can use head gestures. These are also configurable. A shake of the head can say “No” to the Assistant, and a nod can say “Yes”. The shake can refuse a call, and the nod can answer it. You can skip tracks by turning your head to the right, or backwards by turning it to the left. I found that enabling that last facility led to some unexpected track skipping. Apparently I turn my head more than I thought I did.

But, in general, that stuff worked surprisingly well.

The voice reading out stuff was clear, not too robotic and pronunciation was generally okay. You can choose from several languages, although the English variants are limited to US and UK. Don’t expect an Australian accent.

Putting the earpieces on was initially difficult. The tube isn’t flexible. If your earlobes are chunky, things might be a bit tight. But it did get easier as I grew more practised. And my guess is that people won’t be typically putting them on and taking them off frequently. You’d likely be leaving them in place for hours at a time. Or indeed for a full workday for many.

They felt very secure. I had no sense that they may shake loose even though I did a fair bit of driving and walking, and even a little jogging with them in place. On one occasion I thoughtlessly ripped the left-hand unit from my ear and the silicon ring popped off the stalk, remaining in place in my ear.

I used the Sony Xperia Ear Duo with a Google Pixel 2 XL phone, not a Sony Xperia phone, I don’t know if that would make a difference. I initially had a problem with using them, at least with this phone: the volume level was too low.

Now let me be clear: when I was talking on the phone, or when the app was reading out texts or emails, the level was comfortably audible so long as I had the volume set to maximum. But when playing podcasts, even those recorded at relatively high levels could be a strain. Remember, there’s no isolation from the outside world, so the sound at your ears is competing with the world outside. Walking along the street with only the modest traffic levels of south Canberra to contend with, I just couldn’t hear my favourite podcasts clearly enough.

As for music, well, it was okay in a quiet environment. As I write this paragraph, sitting in one of my favourite coffee shops, I’ve got Amanda Palmer’s Who Killed Amanda Palmer streaming on Spotify from the phone. The Muzak is around the same volume. In the quiet parts, I can barely make the song out at all. In the bass-strong parts, there is no sense of bass.

But then I explored the app settings and found a partial solution. First, I tried the “Adaptive Volume Control”, but that actually lowered the playback volume in many cases, so I left that off. But there’s also a “Dynamic normaliser”, which “increases the volume of audio sources with a lower volume”. That helped a lot, bringing up the quieter podcasts to a reasonable level. Amanda Palmer became much clearer too.

But remember, the Sony Xperia Ear Duo earphones are intentionally designed to let you hear what’s going on around you. They will always be competing with environmental noise. If you want high-quality music when you’re out and about, you need sound isolation.

The Sony Xperia Ear Duo earphones are good for up to four hours of listening on a charge, or for 2.5 hours of talk time. When they run down, you can charge them up three more times in the case. Seven minutes of charge is enough for another hour of talk time. Standby time is up to 22 hours.

The Sony Xperia Ear Duo earphones really are a clever design. They strike me as an excellent solution for those who rely heavily on their phone’s assistant features, yet need to retain the use of both hands. They sit reliably in place and work very well in that role.

If your principal interest is in listening to music, or even to podcasts, perhaps it would be better to look elsewhere. The website for the Sony Xperia Ear Duo is here.