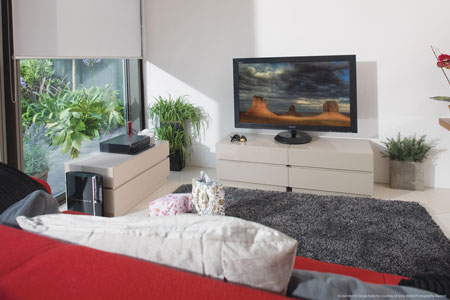 The BRAVIA ZX1 A design masterpiece created to enhance the stylish living space, the BRAVIA ZX1 is guaranteed to catch and hold attention. The extraordinarily slim 9.9mmi HD display – as thin as a CD case – is a world first for an LCD TV, making it an instant technology must-have for the design conscious consumer. This remarkable advance in engineering was achieved by using side-mounted LEDs to illuminate the screen, instead of the usual backlight array. Edge LED technology is the secret behind the world’s thinnest LCD TV.

Whether mounted on the wall or on its table-top stand, the ZX1 series is not be marred by wires from set top boxes or other devices, thanks to ‘BRAVIA 1080 Wireless’ technology. The two-part system uses a super-fast wireless connection to deliver a top-quality HD signal from the media receiver, which contains the MPEG4 AVC HD tunerii, to the ZX1 in real time.

The picture quality is everything you would expect from BRAVIA. Even the most frenetic action has a lifelike smoothness and the impression of reality is further sharpened by the sheer crispness of the image. This is the visible effect of the interplay between two key BRAVIA technologies: Motionflow 100Hz and IB Reduction.

The meticulously designed RF (Radio Frequency) remote commander can be pointing anywhere in the room and still work perfectly. The ZX1 series itself is equally versatile thanks to four HDMI inputs (1 x display; 3 x media receiver), allowing it to connect to a sophisticated home theatre system like Sony’s BRAVIA Theatre DAV-IS50. It can even be used to control it, thanks to BRAVIA Sync technology, which uses HDMI to transmit control information to other BRAVIA Sync-compatible devices. It can enable features like one-touch play and shut-down, which turns the whole home entertainment system on or off at once.

At the time of writing the delivery date and price of the ZX1 are yet to be confirmed.

The ZX1 will have an RRP of $7,399, and will be in stores at the end of March, and will be amongst the first TVs to implement the new TV Energy Rating labelling system.

Read the GadgetGuy review of the Sony Bravia ZX1.