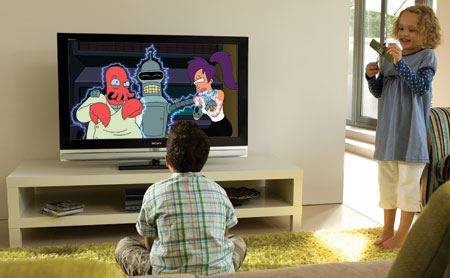 Sony Australia today announced it will roll out the Australian Government’s voluntary energy labelling scheme across its BRAVIA LCD TV range. The company’s first Full HD wireless LCD TVs, the ZX1 and EX1, will be the first in Sony’s line-up to arrive in Australia – from this week – carrying an energy consumption label. All future BRAVIA LCD TVs from Sony will also feature the energy rating labels.

The TV Energy Rating labelling system is a new initiative to present information about the efficiency of home entertainment products, and brings televisions in line with appliances such as fridges, washers and dryers, which have been featuring energy comparisons for a number of years. Sony is implementing the scheme as part of the Australian Government’s voluntary labelling program, which will develop into a mandatory program later in the year, requiring all TV screens to be registered and labelled.

This government initiative aligns Australia with other markets in the world that have already introduced energy labels for TVs, such as the UK and US.

For more information on the Australian Government’s energy labelling scheme and how the star ratings are calculated visit www.energyrating.gov.au

Governments have been tracking trends in the efficiency of appliances and evaluating the impact of energy consumption in the market since 1993. Appliances that have typically been covered in energy efficiency ratings to date include fridges, washing machines, dryers, dishwashers and freezers. The Australian Government introduced a voluntary labelling system for TVs in December 2008 with mandatory labelling due to be implemented from 1 October 2009.

The Energy Rating label, first introduced in 1986 in NSW and Victoria, enables consumers to compare the energy efficiency of domestic appliances on a fair and equitable basis. It also provides incentive for manufacturers to improve the energy performance of appliances.

Energy labelling for plasma and LCD TVs – With Australian households having an average of 2.4 each, it’s easy to see how our appetite for televisions is contributing more than ever to levels of greenhouse gases.

Buying green – Is it possible to be an environmentally aware consumer of consumer electronics?

Standby power: a $500 million dollar issue – Australian homes are spending more than half a billion dollars each year for the convenience of leaving their home appliances in standby mode. Standby is responsible for more than 10% of our household power bills.