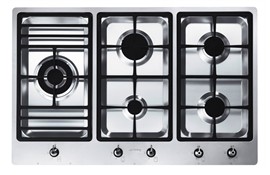 For the serious cook craving the robust styling of a commercial cooktop, there?s Smeg?s flush-mounted CIR900XS (around $2,990 RRP).

Housed in a 90 x 58 cm flush mounted satin stainless steel hob are five gas burners with a stand-alone 15 megajoule (MJ) wok burner to the left and four other burners to the right. They include one rapid (12.5 MJ), two semi rapid (6 MJ each) and one auxiliary burner (4.8 MJ).

The cooktop?s uncluttered layout makes it possible to use large pots and woks simultaneously and Smeg claims the CIR900XS has 90 cm of actual cooking space, significantly more than other 90 cm cooktops available today. This model is also flush-mounted so it sits level with the benchtop, leaving no ridges to collect grease and food particles.