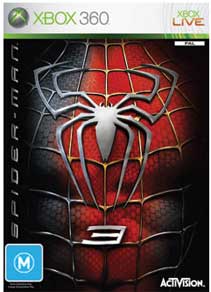 Making a game based on a movie is a bit of thankless task, particularly if the movie features a comic book superhero, not least because you have to tread that line between satisfying two sets of fans – the legions of hard-to-please comic book readers looking for ‘authenticity’ regarding the superhero’s story and powers, and the more mainstream movie goers who may never pick up a comic book but want to be entertained.

Spider-Man 3 has some significant faults when judged purely as a videogame but it does at least offer something for both audiences. Starting with the very, very good stuff, Spider-Man’s super abilities are brilliantly captured, and undoubtedly the most fun you’ll have in this game is swinging gleefully through the city on your web lines, jumping and spinning in mid-air and then bounding up the sides of buildings to take in the impressive views. There’s a fantastic sense of freedom, and power, as you catapult yourself up, over and between the high-rise buildings. So if all you were looking for in a Spidey game was realistic physics and a nice, big playground to experiment with, Spider-Man 3 would be perfect.

It’s only when you dig a little deeper and try and get involved in the main ‘meat’ of the game that things start to unravel. When you’re in the great outdoors, you’ll love the sheer size of the city but, as you progress, you’ll find yourself in plenty of indoors (and subterranean) environments. It’s here that the game camera – something you may not even have really noticed when outside – starts to freak out a bit, with disorienting results. While it doesn’t completely ruin the action, it adds a layer of difficulty to the game that can make things very frustrating, and it happens most when you can least afford it, often in the middle of a fight.

And while on the subject of fighting, Spider-Man has been given a really entertaining array of combat moves, but the actual fighting mechanics end up becoming very repetitive very quickly – a real button bashing bonanza! Graphics, too, aren’t a patch on many recent Xbox 360 games and can be very unimaginative – not a single red, blue, or green car in sight, for instance, only drab, lifeless shades. So, for the ‘Spidey purists’, the web slinging is spot on, but the more technical aspects of the game are disappointing.

For the other audience – the mainstream action movie lovers – the game may have significantly more to offer. There’s loads of fighting, Spider-Man himself is modelled really well and looks great, there’s quite a strong movie flavour to the story when it kicks in, and the characters are all easily recognisable digital versions of their movie counterparts. Spider-Man 3 fans looking to live vicariously through their onscreen hero may lose patience but the truth is that this game is perfect fodder for its primary target audience – casual gamers.