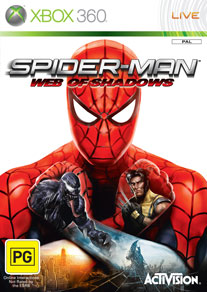 This is how life should be. I’m powerful, I’m fast and this city is my playground. My super powers stop everyone in their tracks to stand in appreciation and awe and boy, is it FUN webslinging my way through the streets! When Spider-Man is good, it’s a scream and it makes you feel powerful, which has to be the primary aim of any ‘superhero’ game.

You’re thrown right into the action which, again, is how it should be with a superhero game so there’s no jarring tutorial to break the rhythm and the first couple of game segments do a great job of teaching players the controls. This time around, (there have been a lot of Spider-Man games from Activision!) as mentioned, the game makes you feel powerful. Attacks, while simple to initiate, look great and have a tremendous effect on enemies. Fighting while crawling up or down buildings is also improved and some satisfying aerial attacks round out the repertoire.

Switching at will between the ‘good’ and ‘bad’ Spidey is fun too. A click of the stick – even in mid-swing, stories above the street – and you morph into Spider-Man’s alter ego, the dark and more macho ‘symbiote’ version. Click again and you’re back in MJ’s good books as your ‘normal’, friendly neighbourhood Spider-Man. To be honest, it’s more fun than functional, with no significant difference between playing as either one – do you prefer web attacks or chucking cars at the bad guys?

But odd design decisions lurk – why do you need to press a button to make the characters speak each line of dialogue, for instance? – and the graphics are OK but a long way from being anything to boast about. Spidey himself, as in previous games, looks the part, but the texture ‘pop-in’ as things are painted in on the fly and the drab, uninspired environment is a disappointment. It’s a shame that the wonky camera has also made a comeback, resulting in some dizzying moments when scaling buildings to fighting in mid-air.

Still, the kicker with Spider-Man games in the past has been the mission types themselves, and what you’re expected to do. Unfortunately, this is where the main problem lies with the game because despite the open-world (‘go anywhere’) environment, you’re led by the nose though the story with little incentive to go off exploring on a whim. Repetition, also, doesn’t so much creep into the game as appear in an instant, smash you in the face and then proceed to rub your nose in it for the entire duration of the game.

All is mostly forgiven though, because a superhero game that makes you feel like a superhero well, they’re doing something right. You feel strong, you look cool, and you kick ass. What more do you need?

This game was reviewed on the Xbox 360 platform, and the price above is for that version of the game. Spiderman Web of Shadows is also available on the following formats: