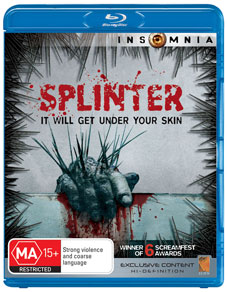 While there are some gruesome, look-away moments for sure, this low-budget horror movie achieves most of its fear factor from the barely-explained and therefore scary and unpredictable evil lurking outside. For a film made with four main roles, two cameos and a single set (a petrol station), Splinter certainly punches above its weight, generating interesting character arcs, a simple but intriguing denouement (that only briefly dips into the farcical) and a take on the human-as-host theme that is more original than most.

We’re not sure Splinter would hold as many people’s interest were it not for the large-breasted hottie in a skimpy tank top (Jill Wagner) to ogle at, especially given that one-third of the main cast’s presence in the movie seems to be purely to state the bleeding obvious (comedian, apparently, Paulo Costanzo). His character, Seth Belzer, continually produces such helpful commentary as “It’s on the roof” and “They took half of her”. Other oddities from the script include the supposedly reassuring “It’s OK, we’re cutting your arm off”, which I’m not sure would appease anyone being held down and having one of their body parts hacked off with a box cutter. However, British Director Toby Wilkins does a great job guiding the sociopathic Dennis Farrell, a criminal on the run (Shea Whigham) through his creeping transformation from unhinged gunman to pyrrhic hero.

It’s a shame Wilkins doesn’t lavish the same attention on the disc releases of his film, however, as the DVD version comes with precisely zero special features, while the Blu-ray disc sports a bunch of only mildly diverting ‘behind the scenes’ clips and the inevitable audio commentary. So much, once again, for the promise of Blu-ray. However, we are treated to the Rambo-esque ex-Green Beret Pat Henderson, aka ‘The Wizard’ who seems pretty pleased to have been able to “transfer his skills” to real life by producing pyrotechnics for movies. The segment lasts about a minute – over before it begins – so probably the most interesting extra is ‘The Splinter Creature’, showing clips of the gymnast who helped Wilkins nail the bizarre movements of the infected bodies.