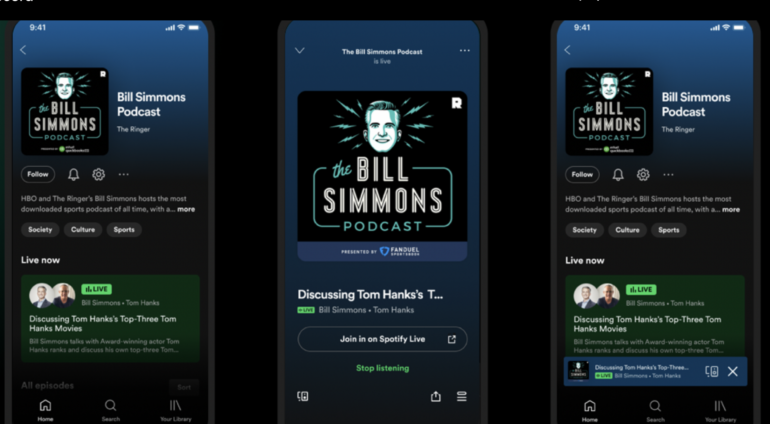 Live streaming is coming directly to Spotify, with the new Spotify Live inviting listeners to participate live in the chat or join the host onstage.

After investing heavily in podcasting in the last few years, and offering a range of high-profile Spotify-only podcasts from the likes of Joe Rogan and Alex Cooper, live streaming was always the next big frontier for Spotify.

The creation of Spotify Stations in 2019 introduced radio-like music streaming, similar to Pandora.  Spotify does not simulcasts of live terrestrial radio stations, unlike rival iHeartRadio which offers terrestrial simulcasts, streaming music and podcasts.

In 2021, Spotify introduced a free live streaming companion app call Greenroom – built on the sports-focused Locker Room app which it acquired earlier in the year. Allowing live online conversations with audience participation, Greenroom launched as a potential competitor for Clubhouse and rivals like Twitter Spaces which thrived during the pandemic.

Now, the streaming audio giant has rebranded its free companion app Greenroom as Spotify Live. At the same time, Spotify has also added a live stream function to the main Spotify app and Spotify web interface, available to its 406 million listeners around the globe.

Listeners can tune in to live programming on Spotify via the creator’s podcast or artist page. If they want to participate in the chat or join the host onstage, they can use the Spotify Live app.

Initially, offering live audio in the Spotify app is only available for “select original programming”, such as Spotify-exclusives Off the Record with DJ Akademiks and After Hours with Alex Cooper. Independent creators who wish to stream live can still do so in the Spotify Live app.

In total, Spotify has more than 50 shows slated to go live following the launch, some of which are one-time events and others of which are recurring or limited series.

The move comes as iHeartRadio also embraces audience participation with its new ‘Talk Back’ tool for sending voice messages to show hosts. The voice recordings are available to broadcast, live on air, around 10 seconds after sending.

Read more on Spotify at GadgetGuy.