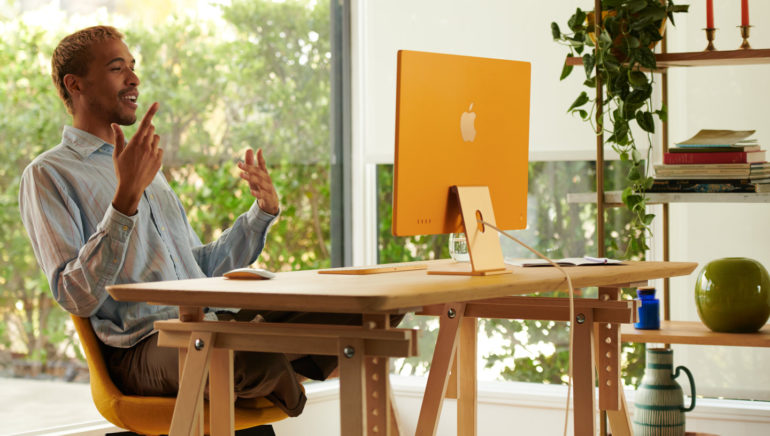 This is Apple’s first major event for 2021. (You can watch it here). One of the first announcement was that Apple’s Podcasts Subscriptions are coming to Australia. The service will cost $27.99 per year and offers ad-free listening and premium content. Subscribers also have early access to new series, along with channels that curate shows. The service also allows for paid subscriptions to individual podcasts.

Apple has improved the speakers and front-facing FaceTime camera. It has also added a Touch ID fingerprint scanner to the keyboard to unlock the computer. There is also support secure access to applications and payments. As with Apple’s other M1-capable Macs, the upgrade lets the new iMac run iOS apps.

An exiting feature is an improved Mini-LED display, which is exclusive to the 12.9 in model. Apple calls it a Liquid Retina XDR screen. There is also a Thunderbolt 3 port for connecting to external monitors.

Apple TV 4K gets a revamp

The new Apple TV 4K features the A12 Bionic chip. This adds support for high frame rate HDR (High Dynamic Range) video with Dolby Vision. It will launch in late May and starts at $249. There’s a novel colour balance feature uses an iPhone to measure the TV’s output to calibrate the picture. The Apple TV 4K’s revamped remote control now features a Siri button. There is also a dedicated power button for switching the TV on and off. The new five-way clickpad with an iPod-style scroll wheel is for navigating menus.

Finally, Apple has launched its AirTag trackers. They locate lost items using the Find My app. Launching on 30 April, AirTags will sell for $45 or $149 for a four-pack. AirTags come as Apple expands the Find My App network to support third-party devices. This allows the location of lost items using an iPhone, iPad, iPod touch or Mac.

The Apple Event 20 April 2021 was the first of its annual announcements. Pretty well everything had been extensively leaked beforehand so there were no surprises. It shows Apple’s commitment to its own silicone chips – a move that others like Microsoft, Samsung, Huawei, and soon OPPO are making to differentiate their products from other ARM processors.

You can read other GadgetGuy Apple news here.