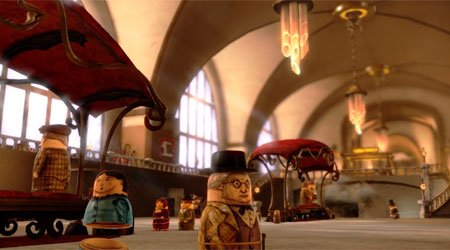 ‘Stacking’ is an innovative and original puzzle game – one might even say a breath of fresh air – available to download on Xbox Live Arcade and the PlayStation Network.

Charlie Blackmore, tiniest of the Russian nesting-doll Blackmore family, is tasked with saving his brother Albert and other siblings from a life of grime.  An over-long introduction sets the scene, portrayed in the whimsical style of a turn-of-the-20th-century silent film and complete with incongruous dialogue such as the use of ‘Mom’, nevertheless resolves into a fantastically appealing tableau with lovely characterisation and alluring artistic direction. Everyone’s a Russian nesting, or stacking, doll, weeble-wobbling their way around and interacting with the environments, and it’s your job to put yourself in their shoes, in the most literal sense.

The game is task-based, requiring Charlie, an extremely small stacking doll, to use his head to solve challenges by hopping inside other, larger dolls. This is executed with a single button press and works only if the doll whose shell he’s trying to inhabit is only one size larger than him. So, to get to the fourth biggest doll, you hop into one just bigger than Charlie, then into another, then another. Just that simple mechanic alone makes for a lot of fun, especially considering that every doll you ‘possess’ in this manner has a special ability, exercised with the A button, such as a useful ‘get out of my way’, whereby everyone is shuffled rapidly out of the doll’s path, to an amusing ‘full steam ahead’, which is a kind of boost, or skills that manipulate elements of the environment to help you progress. There are loads of them and each one is accompanied by a funny animation and sound effect, compounding the sense of fun you get simply from messing around and trying everything out.


Encouragingly, for a budget title, there are multiple solutions for every challenge, which not only considerably increases the potential playing time for the game, but also demonstrates that ingenuity and effort don’t necessarily have to be casualties in lower-priced releases. Finding solutions and, indeed, successfully attempting these alternate solutions to the main task, bring the player achievements and in-game awards. You’re also rewarded for collecting ‘family sets’ of dolls, and there are lots of ‘side quest’-type missions to complete once you’ve finished the main one.

It feels like a lot of love has gone into making this game and the imaginative design means it’s like being a kid in a toy shop, allowing you to take everything down from the shelves, give them a prod, push and pull buttons, tweak limbs, and just see what everything does. Stacked is a fascinating and quite inspired journey of discovery, even for the most hardened and jaded games player, and proves that budget games don’t have to be bare bones, cheaply produced or shallow. Instead, Stacked chortles merrily in the face of all such presumptions and proves there’s another way, but does so in the most gentle, encouraging way.