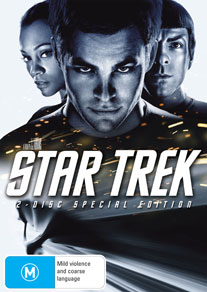 Every Christmas holiday period needs an epic blockbuster-style action movie the whole family can watch, and they don’t come better than the prequelicious Star Trek from Paramount. Out now on Blu-ray and DVD, Director JJ Abrams reinvents the charmingly silly sci-fi series as a genuinely exciting, funny and quite frantic space adventure romp, with a pace that far exceeds anything from the original series, largely possible, at the admission of JJ Abrams himself, thanks to much higher available budgets and better technology.

The Blu-ray version of the film has all the deleted scenes, commentaries and gag reel found on its DVD counterpart but goes big on extras for fans stumping up the cash. There’s a whole extra (third) disc in the Blu-ray box that gives owners a ‘digital copy’, for use on portable devices or their PC, as well as a free trial version of the Star Trek D-A-C game.

That’s a good bonus by itself, but the Blu-ray extras are presented differently, with ‘branching pods’ that turn out to be referring to the menu system but also a BD-Live feature called NASA News, allowing space cadets to access real-life NASA news if they have their Blu-ray player connected via Ethernet. Really keen troopers can also get 360 views of both ships – the USS Enterprise and Narada, the Romulan Mining Vessel – in the Starfleet Vessel Simulator. Unfortunately, it’s not much more than an impressive but static 3D model of the ships, with static text boxes that won’t teach anything new to Trekkies and won’t be interesting to anyone else. Fantastic movie, though.

The price above refers top the DVD edition of Star Trek. The movie is available in the following editions and formats: